Dural puncture after labor epidural placement occurs in up to 1.5% of parturients.1 Many factors have been hypothesized that might put a patient at risk for dural puncture, such as a large needle gauge and patient position during placement. However, a history of prior epidural steroid injections has not been investigated as a risk factor in the current literature.

Epidural steroid injections are the most commonly performed intervention in pain clinics in the United States.2 So it is likely that some parturients will have this intervention during their lifetime. The patient presented here, a parturient, had a history of lumbar degenerative disk disease and received two lumbar epidural steroid injections at the L4-5 interspace for treatment, the last being eight weeks before her presentation in labor.

Per her request, the patient received a lumbar epidural for labor analgesia but sustained two unintentional dural punctures during placement.

A 37-year-old woman, gravida 2 para 1 at term, presented secondary to rupture of membranes and was admitted for expectant management. The patient’s pregnancy was complicated by advanced maternal age, history of placenta previa (resolved), history of postpartum hemorrhage and chronic low back pain, which was treated with lumbar epidural steroid injections.

After written informed consent, a labor epidural was performed at the L3-4 interspace, using aseptic technique and a midline approach. An epidural kit by B. Braun was used, and a 17-gauge, 9-cm Tuohy needle was introduced after skin infiltration. Loss of resistance to saline was at 4.5 cm, and the catheter was threaded easily to 9 cm at the skin. A test dose of 3 mL of 1% lidocaine resulted in numbness in the left leg and hypotension (blood pressure in the 90s/40s), despite initial negative aspiration for cerebrospinal fluid (CSF) and heme.

After these results, the catheter was again aspirated with a positive finding for CSF. Hypotension resolved with one dose of ephedrine and three doses of phenylephrine, and the fetal heart rate remained stable at baseline values. An initial dermatome check with ice revealed a T4 level on the left and a T3 level on the right. The patient complained of weakness in her left leg, but she maintained the ability to plantar flex and extend at L4-5 of 5 strength. Once the patient was stable hemodynamically, the catheter was dosed as an intrathecal catheter with 1 mL of 0.25% bupivacaine. The patient received a poor analgesic response.

After discussion with the patient, another labor epidural was performed using a midline approach at the L2-3 interspace. Loss of resistance to saline occurred at 4.5 cm, and the epidural catheter advanced easily, although a small “pop” was noted during advancement. This time CSF was freely aspirated from the catheter. The complication was discussed with the patient, and it was decided to manage the catheter as an intrathecal catheter. After delivery of the infant, the patient experienced a dural puncture headache, which was managed successfully with a fluoroscopically guided epidural blood patch by her chronic pain management specialist.

A study by Unverferth and Olix in 1973, in rabbits, demonstrated how steroid injections affect gastrocnemius tendons.3 The study revealed that after multiple injections, the tendons changed both microscopically and in terms of a parameter known as the modulus of elastic stiffness, a practical and valid indicator of ultimate tensile strength. The modulus of elastic stiffness equals applied load over change in length in material. 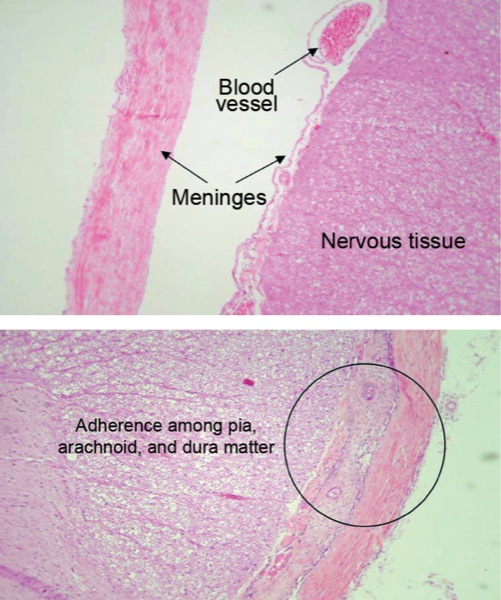 Lima et al, in 2010, performed a study in 14 dogs that demonstrated how intrathecal steroids affect the dura, arachnoid and pia maters. Saline versus steroid was injected into the dogs’ intrathecal spaces, after which they were monitored for 21 days.4 Meningeal thickening and lymphocytic infiltration of the blood vessels were the main histologic changes observed in the dogs injected with steroids. Further histologic examination revealed adherence among the pia, arachnoid and dura maters in three animals; the nerve roots also were completely encircled by fibrous tissue.4The authors concluded that steroid injected into the intrathecal space causes histologic change in the meninges. This change appears to affect the dura with cell vacuolization and fibrosis4; although not explicitly stated, this change could compromise the integrity of the meninges.

Previous studies in the orthopedic field have shown that steroids have an effect on knee ligament strength after joint injection, as well as ligament healing after steroid injection. Slucky et al, in 1999, demonstrated a decrease in maximum failure load of ligaments that had been exposed to steroids, as well as decreased stiffness.5 Unverferth and Olix showed that steroid injection affects connective tissue, both histologically and mechanically, by decreasing its strength.3 While the dura is not the same as a tendon, it is similar in composition and primarily composed of elastin, proteoglycans and collagen.5 Moreover, Slucky et al demonstrated that repeated epidural steroid injections could lead to a 24% reduction in tensile strength in the dura mater of dogs, although these results were not consistently repeated.5

We present a case of inadvertent dural puncture, twice, in the same patient, using only the relatively flexible epidural catheter. This complication, although not unheard of, is rare. For it to occur twice in the same patient with an experienced practitioner placing the catheter raises the question: Could this patient’s dura be different from the average parturient, and could this be related to her history of lumbar epidural steroid injections?

A history of previous treatments with lumbar epidural steroid injections is somewhat rare in the obstetric population, so it is unclear what effect steroids may have had on the integrity of the dura in relation to the placement of an epidural catheter. There is a paucity of data on this topic, and therefore the scientific evidence is limited. However, we hypothesize that the patient’s dura may have been weaker secondary to her history of multiple epidural steroid injections, the most recent of which was eight weeks prior to the patient’s presentation for labor epidural analgesia.

Based on studies evaluating the reduced integrity of tissues similar to the dura after exposure to steroids, there is evidence in the literature to support our hypothesis that prior lumbar epidural steroid injections may have predisposed this patient to inadvertent dural punctures with the epidural catheter itself.