“Hip fracture incidence continues to rise, due largely to our aging population,” said Sarah Tierney, MD, a regional anesthesia fellow at the University of Toronto. “Despite advances in health care, the mortality rate following hip fracture fixation has remained unchanged since the mid-1990s, with an annual incidence of approximately 30%.

Dr. Tierney and her colleagues used the institution’s electronic database to identify 2,591 patients who underwent hip fracture fixation between Jan. 1, 2003, and Dec. 31, 2015. A variety of clinical, laboratory and outcome data were extracted and mortality data were obtained from the hospital’s discharge database. The study was a propensity score, matched-pairs cohort study.

“Each patient’s propensity score for spinal anesthesia was calculated by incorporating 29 variables,” Dr. Tierney explained. “These variables were chosen because they’ve been previously shown to have some influence on mortality for hip fracture patients.” The year of surgery was also taken into account, thereby minimizing potential confounding from unmeasured or unknown effects of changes in care processes over the study period.

Reporting at the 2018 Joint World Congress on Regional Anesthesia and Pain Medicine and annual meeting of the American Society of Regional Anesthesia and Pain Medicine (abstract 4877), the investigators revealed that patients who received general anesthesia had a greater 90-day mortality (8.6%) than those who received spinal anesthesia (6.3%; P<0.001). Mortality did not differ significantly at the 30- and 60-day time points (Figure). 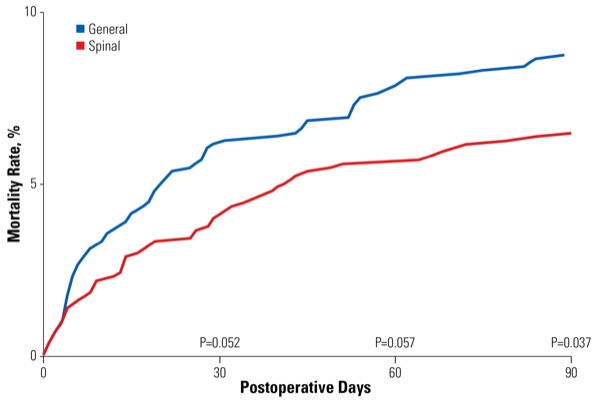 “The difference in 90-day mortality corresponded to a number-needed-to-treat of 44 patients, and an absolute risk reduction of 2.3%,” Dr. Tierney said. “Interestingly, although causes of death were varied, the spinal cohort was less likely to die from a cardiac event [19.7%] than patients who received general anesthesia [30.3%], but were more likely to die from respiratory events and sepsis. Nevertheless, our study was not adequately powered to assess for these outcomes.”

Spinal anesthesia was also found to result in significantly decreased rates of pulmonary embolism (0.5% vs. 2.3%; P<0.001) and major blood loss (4.8% vs. 7.7%; P<0.001). No differences were found between groups with respect to length of stay or major cardiac events.

“In conclusion, our study suggests that spinal anesthesia may be the preferred anesthetic technique for patients undergoing hip fracture repair,” Dr. Tierney noted. “We believe a spinal is a great alternative to general anesthesia for typically frail hip fracture patients.”

“This is a very interesting study about a timely and relevant topic, especially given our increasing elderly population,” said session moderator Jaime Baratta, MD, a clinical assistant professor of anesthesiology at Thomas Jefferson University in Philadelphia. “Quite a few studies are being performed in this regard. Were you able, in your matched cohort, to control for patients in whom neuraxial anesthesia was contraindicated?”

“Some of those confounders may have balanced out when we controlled for things like pulmonary risk factors,” Dr. Tierney replied. “But it wasn’t necessarily controlled for in the study.” Dr. Tierney noted that there are multiple ongoing randomized controlled trials looking at quality of life and functional outcomes, such as return to home, return to function and days spent in rehabilitation facilities. Hopefully those will be published in the literature in the next year or two.”