Authors: Odinakachukwu Ehie, MD, FASA et al
ASA Monitor October 2021, Vol. 85, 45–48.
Why does it matter? The concept of health equity involves promoting the elimination of health disparities, which are strongly associated with social disadvantage, and ensuring all members of society experience a fair opportunity to be as healthy as possible.  Health disparities have traditionally been examined across socioeconomic status and comorbidities, but the social determinants of health are much more complex. They include differences in health opportunities such as safe housing, quality education, and structural racism.  Therefore, health disparities are more inclusively and accurately defined as systematic differences in health that are potentially avoidable and which occur between groups of people whose social hierarchies, according to power and wealth, have influenced access to health resources and overall health quality. However, health equity is not only a social justice issue but an economic issue. Research has demonstrated that more than $1 trillion in indirect costs associated with illness and premature death and approximately $230 billion in direct medical care expenditures would have been saved for the years 2003-2006 by eliminating health disparities for marginalized groups. In other words, the upfront expenses of establishing a multidisciplinary team to evaluate patients well in advance of surgery could potentially correlate to reduced costs from decreased length of stay, fewer readmissions, and lower postoperative complications. A comprehensive health equity strategy can mitigate large annual increases in health care costs that consume a substantial percentage of corporate profits and improve long-term productivity. The metric for evaluating progress toward health equity begins with identifying health disparities and then implementing systematic changes in policies and practices to eliminate these inequities.  As specialists in perioperative medical care, we play a critical role in mitigating the health equity gap.

While the increased rate of comorbidities, low socioeconomic status, and access to insurance play significant roles in contributing to racial and ethnic health disparities, more research is required to understand the complex circumstances that compose the social determinants of health. Deeper root causes of health inequities such as unsafe environmental conditions, inadequate education, healthy food availability, and structural racism affect health as well. Even when studies have controlled for insurance type, comorbidities, and severity of diagnoses, racial and ethnic minority groups still receive lower quality health care in the United States compared to whites. Recent studies have demonstrated that diagnostic algorithms and practice guidelines have directed more resources to white patients compared to other ethnic groups. For example, referral to a nephrologist for transplantation may have been prolonged for Black patients because the estimated glomerular filtration rate calculation has been historically corrected for race, thus resulting in higher estimates of kidney function in these patients. These types of algorithms where decision-making is affected by race extend to multiple specialties, including cardiac surgery, cardiology, oncology, obstetrics, and urology. As further studies are developed, a more comprehensive approach that assesses factors such as health-practicing behaviors, health literacy, nutritional status following surgery, and social support should be considered in anesthesia practices as well as subspecialties.

The COVID-19 pandemic has highlighted that health equity is quite lacking within the U.S., as many racial and ethnic minority groups have been disproportionately harmed by the coronavirus disease. According to a study by the Epic Health Research Network and the Kaiser Family Foundation, the hospitalization and death rates per 10,000 were respectively for white patients for Asian patients, 24.6 and 5.6 for Black patients, and 30.4 and 5.6 for Hispanic patients as of July 2020. Similar to the Black and Latinx community, Native Americans have also been unequally affected by COVID-19, which could be attributed to living in multigenerational households, existing in crowded spaces, and having jobs that cannot be performed remotely such as grocery store clerks, household workers, and transit employees Discrimination could also explain some of the health disparities witnessed during the COVID-19 pandemic. In December 2020, The New York Times published the article of a Black female physician whose request for treatment with remdesirvir was denied by a white physician despite testing positive for COVID-19. Even as the U.S. approached the goal of a vaccination rate above 70%, the Latinx community and Black people received the coronavirus vaccine at a lower rate compared to whites and the Asian community (Figure 1).  These racial disparities in vaccine administration reflect a number of critical issues that must be considered and addressed. Some of these issues include the emergency use approval of the vaccine, gap in health literacy, and the distrust of medicine in general that has been pervasive among communities of color who share a history of oppression. 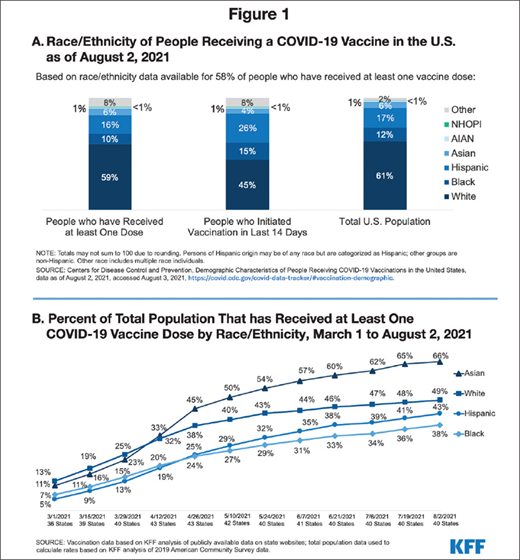 The perioperative environment provides a significant opportunity for pain management of surgical patients. Research has demonstrated that Black patients are evaluated less frequently for pain compared with white patients in both outpatient and inpatient settings. Furthermore, studies have exhibited that when similar types of pain are endorsed by patients, Black patients are managed with fewer opioid medications, suggesting that racial bias can be a potential driver of disparities across perioperative pain management. Given that proper treatment of a patient’s pain through medication is critical to their recovery, the evaluation of how the social determinants of health intersect with perioperative pain management is essential. A retrospective study examining the incidence of persistent postoperative pain after total knee arthroplasty demonstrated that Black patients had 1.8 times the odds of persistent postsurgical pain compared to white patients. Perioperative pain management can also prove to be quite challenging in patients with comorbid conditions such as obesity, which can be associated with low socioeconomic status, especially in patients requiring preoperative opioid use. Although there is a trend toward a multimodal approach and less reliance on opioids in postoperative pain management, opioids are still a primary source of analgesic control. As a result, the intersectionality of social determinants of health with perioperative pain control warrants further evaluation.

Latinx and Black women are less likely to use neuraxial labor analgesia than non-Hispanic white women. The disparity in neuraxial analgesia use among Hispanic women is even more pronounced when evaluated by primary spoken language. Spanish-speaking women were significantly less likely to anticipate (adjusted odds ratio 0.70 [97.5% CI: 0.53-0.92]) and use (adjusted odds ratio 0.88 [97.5% CI: 0.78-0.99]) neuraxial analgesia compared to English-speaking Hispanic women, and these disparities persist even after adjusting for age, marital status, income, obstetric provider type (obstetrician/midwife), and labor type. Furthermore, in cesarean section where there is a preferred consensus for neuraxial analgesia, Latinx patients with adjusted odds ratio (aOR) of 1.1 (95% CI, 1.0-1.3) and Black patients with an aOR of 1.7 (95% CI, 1.5-1.8) remain more likely to have general anesthesia administered to them despite an increased morbidity and mortality rate. These findings suggest that other social determinants such as language barriers, inequity in patient education, social support, and socioeconomic status should be further evaluated to address these health disparities. In fact, one randomized controlled trial demonstrated increased utilization by Latinx Medicaid beneficiaries after the administration of an education program regarding labor epidurals.

Health equity within obstetric anesthesia has also remained substandard with regard to maternal mortality. Pregnancy-related deaths per 100,000 live births for African American and American Indian/Alaskan Native women over age 30 has been four- to five- times higher compared to white women, even among women with higher levels of education. These findings indicate that health disparities across maternal mortality is a complex national problem. Stress due to experiences of unconscious bias and structural racism could play a role in adverse birth outcomes in Black patients, but more research is warranted to explore individual experiences with and responses to racism.

Infant mortality is twice as high in the Black community compared to the national average and Black and Latinx children also have an increased prevalence of asthma and hospitalizations from asthma compared to white and Asian groups.6 One study exhibited an increased rate of postoperative mortality among Black children among other composite complications, even when controlled for comorbidity. These findings further signify the importance of examining the more complex social determinants of health in the assessment of health disparities with the intention to allocate resources to achieve health equity.

The prevalence with which health disparities play a major role in perioperative outcomes is undeniably significant. To address these issues now and over the next decade, a multi-pronged approach to eliminating these health inequities is necessary. Some approaches are outlined below:

Measuring health disparities and seeking opportunities for all who are part of the patient care pathway to intervene will be a tenet of quality assessments moving forward. Further, as we move to value-based payments for providers and facilities, it will be imperative that we address not just the medical but also the social determinants of health. This holistic approach is critical if we want to improve outcomes, lower costs, guarantee patient satisfaction, and continue to show the “value” that anesthesiologists and anesthesia providers can bring to the table. In a world where anesthesia services are increasingly looked at as a commodity, we have unique skill sets and opportunities to truly improve outcomes, and not just provide services. However, this requires intentionality in educating ourselves as well as addressing health disparities in our patients. We should not only care about health equity because it is the right thing to do, we must care about health equity because failing to do so hurts our patients as well as our profession.