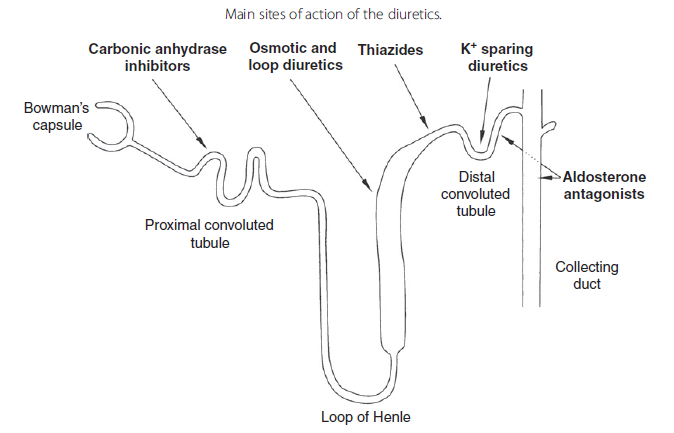 • Cardiovascular – like thiazides they produce arteriolar vasodilatation which reduces systemic vascular resistance. In acute pulmonary oedema the preload is also reduced (and dyspnoea) ahead of any change that could be attributed to a diuresis.

• Renal – in contrast with the thiazides an increase in renal blood flow is seen with blood being diverted from the juxtaglomerular region to the outer cortex.

• Biochemical – the disturbances seen are similar to those induced by the thiazides and include hyponatraemia, hypokalaemia, hypomagnesaemia and a hypochloraemic alkalosis. In contrast with the thiazides the loop diuretics may precipitate hypocalcaemia due to increased Ca2+ excretion. Hyperuricaemia is sometimes seen and occasionally precipitates gout.

• Metabolic – hyperglycaemia is less common than with thiazides. Loop diuretics increase plasma cholesterol and triglyceride levels although these usually return to normal during long-term treatment.

• Miscellaneous – deafness occasionally follows rapid administration of a large dose and is more common in patients with renal failure, and those on aminoglycoside therapy. Bumetanide is less ototoxic than furosemide but may also cause myalgia.

• Interactions – lithium levels may rise when given with loop diuretics. Kinetics Both furosemide and bumetanide are well absorbed from the gut although their oral bioavailability is different (65% and 95%, respectively). Both drugs are highly plasma protein-bound (> 95%) and excreted largely unchanged in the urine.