Autism is a developmental disorder characterized by persistent deficits in communication and social interaction and is often associated with the presence of stereotypic or repetitive behaviors.1 The incidence of autism in the United States is increasing and has prompted research directed at identifying risk factors for autism.2,3

The true etiology of autism is unknown. For 40 years, research has focused on perinatal and neonatal exposures and their relation to autism, and yet no definitive answers have been identified.4 Obstetric and delivery factors in addition to neonatal exposures have been examined, and many of the results have been inconsistent.5 Despite inconsistencies in the literature, most experts agree that the mechanism underlying the etiology of autism includes a combination of environmental and genetic risk factors.5 On October 12, 2020, an article titled “Association between epidural analgesia during labor and risk of autism spectrum disorders in offspring” was published in JAMA Pediatrics.6 The article sparked debate and garnered multiple responses and critiques. This review will formally describe the existing literature on the potential for a correlation between epidurals and autism, provide a description of the controversy, and discuss important points for patients and providers to consider.

The authors’ objective was to assess whether lumbar epidural anesthesia (LEA) exposure was associated with an increased risk of developing autism in offspring. The study is a retrospective longitudinal cohort analysis of 147,895 singleton children born via vaginal delivery at 28–44 weeks gestational age in the Kaiser Permanente Southern California hospital system between Jan 1, 2008, and Dec 31, 2015.

Both anesthetic records and autism evaluations were readily available to researchers for review because the investigators had access to a systemwide electronic medical record system and a standardized method to evaluate children for autism at both 18 and 24 months.

In the JAMA Pediatrics study, the authors reported a 74.2% epidural usage rate, and they found that a significantly higher percentage (1.9%) of children in the LEA group received a diagnosis of autism spectrum disorder (ASD) versus 1.3% of children in the non-LEA group (HR 1.37, 95% CI 1.23–1.53). Of the children born to mothers in the LEA group, longer duration of exposure to LEA was associated with greater ASD risk (HR 1.05 per 4 hours of LEA exposure, 95% CI 1.01–1.09). In their discussion, the authors express concern regarding the safety and long-term health of offspring exposed to LEA and suggest further research is needed to identify the mechanism of the association between LEA and autism.6

Critics of the study expressed concerns over both methodology and the clinical implications of the study. On the same day the above article was published, five medical societies that represent more than 100,000 physicians including the American Society of Anesthesiologists, American College of Obstetricians and Gynecologists, Society for Obstetric Anesthesia and Perinatology, the Society for Pediatric Anesthesia, and the Society for Maternal-Fetal Medicine released a joint statement aimed to reassure pregnant women that neuraxial analgesia is safe, effective, and the “gold standard for labor pain relief.” The statement iterates that the study “does not provide credible scientific evidence that labor epidurals for pain relief cause autism” and cautions against implying causation from an observational study.7 They reinforce the safety of epidurals based on the experience of millions of women each year and questioned the biological plausibility of the study given the low levels of drug exposure to the fetus in the setting of low-dose epidural local anesthetic and opiates used in common practice. They encouraged women to continue to utilize safe ways to relieve pain for a positive childbirth experience. 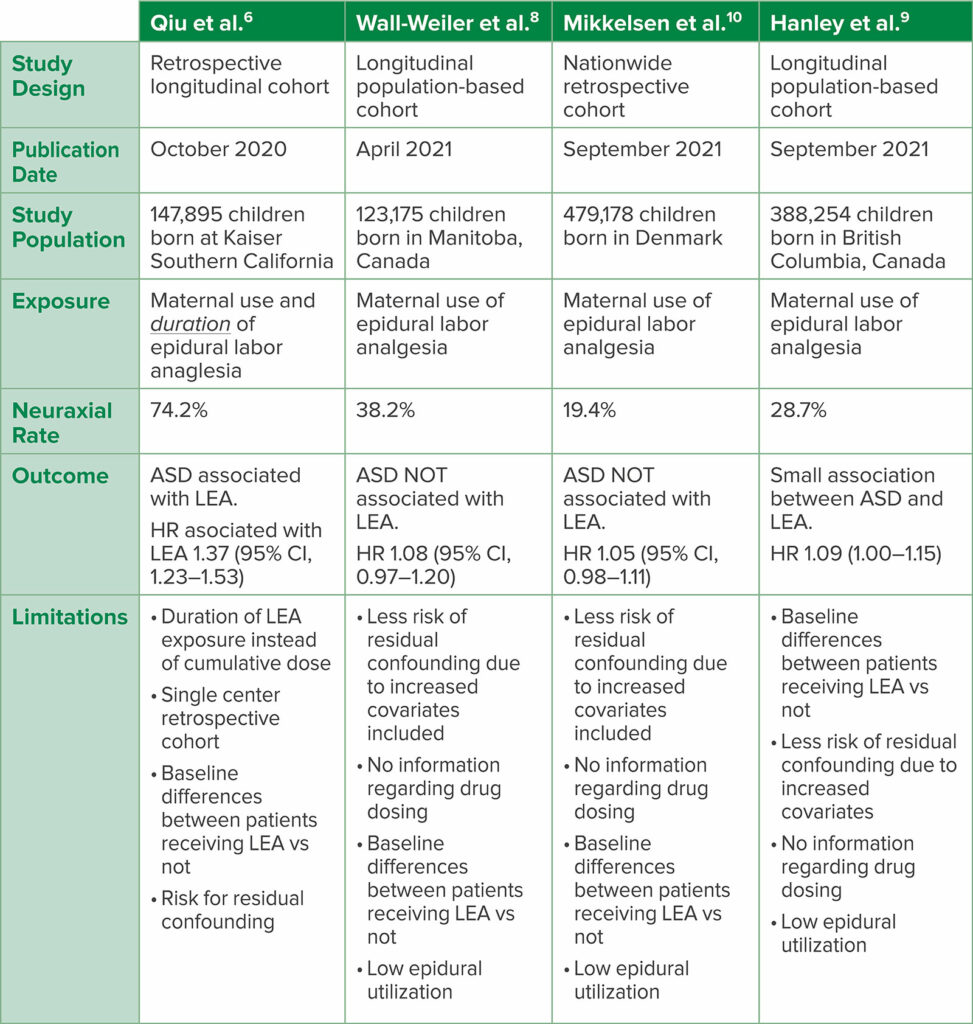 Several retrospective population-based studies from Canada and Denmark aimed at re-evaluating the association between epidurals and autism were published which contradicted the findings in the JAMA Pediatrics article (Table 1).8-10 The follow-up studies increased the number of covariates in an attempt to minimize residual confounding, and some performed multiple sensitivity analyses to evaluate for potential bias. Of the three studies, two found no association between LEA and ASD.8,10 One study from British Columbia, Canada, indicated a small, but statistically significant association between epidural analgesia and autism.11 However, multiple sensitivity analyses within the study did not show an association, and based on their findings, the authors reported that given the high likelihood of residual confounding, the results do not provide sufficient evidence for an association.

Beyond medical societies, numerous individuals published critiques, criticisms, and letters to the editor with their own concerns related to the original article. The Editor in Chief of JAMA Pediatrics published an Editor’s Note in response to the article, noting that his “personal assessment is that the association is yet to be definitively established. If a more definitive study is done, JAMA Pediatrics will publish it.”12 Many experts expressed concerns over residual and uncontrolled confounding in the original article.12-15 For example, some responses suggested that the presence or absence of ASD in the parents should have been considered in the original study considering that ASD is estimated to be 40–80% genetically determined.16 Others questioned the biological plausibility of how low-dose local anesthetic administered to the mother just a few hours before birth could lead to enough local anesthetic toxicity to permanently affect the developing brain.9,13-15 There is very sparse data regarding any causal relationship between LEA and abnormal neurologic development in both humans and animals.17–20

Another interesting revelation is that studies attempting to identify a correlation between ASD and LEA all identified substantial baseline differences between women who do and do not receive epidural analgesia. Some of these confounding differences include maternal age, race, ethnicity, education level, household income, maternal diabetes, pre-eclampsia, and gestational age.21 These differences suggest that women receiving epidural analgesia may be inherently different than those who did not. As it is difficult to account for global aspects of maternal health such as general mental state, nutrition, self-care/prenatal care, residual confounding may remain in not only the original article, but in the subsequent retrospective studies as well.21

LEA offers a number of important benefits to women during labor. Neuraxial analgesia provides superior pain management as compared to IV analgesia or nitrous oxide.22 The presence of an epidural catheter in situ acts as a safety mechanism for women requiring urgent or emergent cesarean delivery by potentially preventing the increased risks associated with general anesthesia, improves post-partum pain scores, and allows maternal participation in bonding immediately after cesarean delivery.22,23 Consequently, one of the most serious concerns with the JAMA Pediatrics study is the inference of a causal relationship between LEA and ASD leading to significant maternal anxiety and guilt over choosing LEA for labor pain relief. This could lead to a reduction in LEA usage, which has the potential to increase rates of general anesthesia for emergent cesarean delivery, which in turn may increase neonatal exposure to maternal medications and increase maternal morbidity.15,16,22-25
The authors of the JAMA Pediatrics article suggested that their findings indicate the importance of future research to “better understand the neurodevelopmental safety of LEA to our children.”26

Although it is clearly stated in the discussion of the JAMA Pediatrics article that there is no causal relationship between LEA and autism, it is difficult to glean this point from the title and abstract of the article.6 Noncausal associations can sometimes be misinterpreted by the general public, and inaccurate representation of data in the media is common. One example of this is the assumption that vaccines cause autism, a concern that initiated from a single, subsequently retracted, study from the Lancet in 1998 that has subsequently led to widespread vaccine hesitancy, which the WHO has labelled one of the top 10 threats to global health.27,28 Great care should be taken when discussing risks and benefits of epidurals with patients to dispel inaccuracies and emphasize the safety of epidurals.

In conclusion, no subsequent publication has found conclusive evidence of an association or correlation between LEA and ASD, despite more rigorous methodology. When discussing risks and benefits with our patients, care should be taken to reinforce the safety profile of LEA. While concerns regarding the association between ASD and LEA by patients should not be dismissed, the current literature supports neither a correlation nor a causative relationship between the two, and that fact should be firmly reiterated to all our patients.