Neuraxial anesthesia can have unintended consequences, for which an astute practitioner must be vigilant to avoid life-threatening complications. Impaired sensory and motor function is the expected outcome of a neuraxial anesthetic for surgery. In our case, a combined spinal-epidural (CSE) anesthetic resulted in a sudden and unexpected onset of extreme pain. There are multiple potential causes (all uncommon) of pain immediately following a CSE, including direct mechanical nerve injury, neurotoxicity from unintended injection of toxic substances, and hematoma. We present this case because the etiology proved to be more obscure than initially anticipated.

A 37-year-old man with avascular necrosis of the left hip was scheduled for a left total hip arthroplasty. His past medical history included obstructive jaundice, pancreatitis, and alcoholic cirrhosis. He was morbidly obese, with a body mass index of 36.35 kg/m2. His neck circumference was greater than 40 cm, and he had a positive screen for obstructive sleep apnea (STOPBANG score, 3). His past surgical history included a right total hip arthroplasty and right wrist arthroplasty, both of which he initially described as having proceeded uneventfully. He denied any complications from past surgery or anesthesia.

On the day of surgery, the patient’s only complaint was persistent pain in his left (surgical) hip, for which he had been prescribed oxycodone 10 mg every 6 hours as needed and naproxen 500 mg every 6 hours as needed. He was awake and alert, and was in no apparent distress except for the reported pain. His vital signs were within normal limits. Laboratory test results were remarkable for both slightly elevated liver function test values and a prothrombin time of 16.5 seconds and an international normalized ratio of 1.3.

Given the absence of a history of abnormal bleeding or bruising, there was judged to be no absolute contraindication to regional anesthesia. We anticipated that the benefits of reducing perioperative opioid administration, especially in an opioid-tolerant patient, far outweighed the risks of neuraxial anesthesia. Therefore, we proceeded with our usual anesthetic for patients undergoing hip arthroplasty: a CSE with intraoperative sedation. We planned for postoperative IV hydromorphone patient-controlled analgesia after spinal anesthesia had worn off.

The patient was placed in a sitting position and given 5 mg of IV midazolam and 50 mcg of fentanyl in divided doses. A 3.5-inch, 17-gauge Tuohy needle was easily placed in the epidural space at the L3-4 level. Neither blood nor cerebrospinal fluid could be aspirated. There were no paresthesias. Next, a 25-gauge spinal needle was easily inserted through the epidural needle. After confirming correct placement by withdrawal of clear cerebrospinal fluid, 15 mg (3 mL) of 0.5% isobaric bupivacaine was injected. With the patient still in the sitting position, a 19-gauge catheter was threaded 4 cm past the tip of the epidural needle (10.5 cm at the skin), whereupon the epidural needle was withdrawn and the catheter was taped in place. The patient was then repositioned supine.

Almost immediately, the patient began to complain of crushing hip and leg pain. A quick sensory and motor examination demonstrated appropriate signs of a developing spinal anesthesia. Despite his excruciating pain, which from his description appeared to extend bilaterally from T12-L3, he had no sensation to either pinprick or cold below the T10 dermatome. He had a dense motor block (unable to move his feet or bend his knees). His blood pressure decreased from 133/89 to 98/41 mmHg secondary to the sympathectomy, requiring treatment with IV phenylephrine.

Upon considering the differential diagnosis, these rapidly developing symptoms seemed inconsistent with epidural hematoma, accidental direct nerve damage, or cauda equina syndrome. We consulted with our neurology colleagues and requested immediate MRI. The diagnoses of bupivacaine neurotoxicity or spinal compression from a hematoma were contemplated and a mass lesion needed to be ruled out. The neurology team recommended 500 mg of IV methylprednisolone to reduce any swelling around the spine, and this was administered.

The epidural catheter was removed prior to imaging. The MRI study showed disk herniation at T8-9 and L3-S1 without any significant spinal stenosis, and no fluid collection was identified (Figure). In general, the radiologist considered the images to be unremarkable. 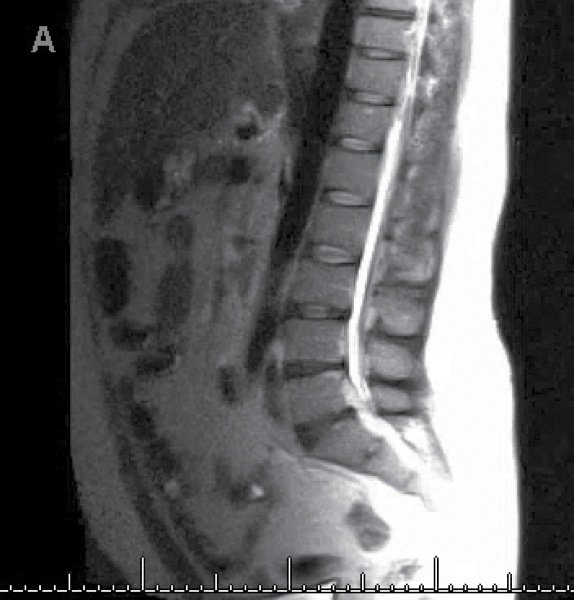 After ruling out the most urgent cause of the patient’s pain, he was transported to the PACU for observation and pain control. Over the next few hours, as the spinal anesthetic resolved, so did his pain. To our amazement, the patient returned to his baseline condition and could move his lower extremities without difficulty. It was at this time that he described to us a somewhat similar, but less extreme, event that occurred with his previous hip replacement surgery under neuraxial anesthesia. Later during the week, he had his scheduled surgery under general anesthesia without incident and was discharged home on postoperative day 3. At a 3-month postoperative visit, he was free of pain and off all opiates and alcohol.

Even though there are multiple potential etiologies for pain associated with neuraxial blocks, none seemed to fit the presentation seen in this case. We present this case because it appears that symptoms of chronic pain were unmasked and intensified by a spinal anesthetic.

The first possibility considered in our differential diagnosis was transient neurologic syndrome (TNS; previously called transient radicular irritation), which is thought to be caused by local anesthetic neurotoxicity. However, the common presentation of this syndrome, while in a similar dermatomal location, usually occurs after the acute effects of spinal anesthesia have disappeared rather than concurrently with the onset of the spinal blockade. Furthermore, symptoms tend to persist for several days, if not longer, whereas with this patient the pain resolved concurrently with the resolution of spinal anesthesia. Finally, TNS is most frequently associated with lidocaine and not with bupivacaine, as was used in this patient.

Although this patient’s symptoms may also have vaguely resembled those of cauda equina syndrome, neither the abrupt onset nor the normal MRI findings were consistent with this diagnosis.

Although our patient had no history of phantom pain or other centrally or sympathetically mediated pain disorder, we suspect that the spinal anesthesia unmasked a chronic pain disorder, the symptoms of which had abated over time. This case serves as a reminder of the importance of careful patient selection and of a detailed and complete pain history. We are uncertain of the underlying cause of this event; however, it appears that just as phantom pain and sympathetically mediated pain may be unmasked or intensified by spinal anesthesia, so might other, less well-defined symptoms of chronic pain.

Dr Thakrar is the corresponding author, at shilen.thakrar@vcuhealth.org.