The brain under anesthesia is a marvel to behold. Although the electroencephalogram (EEG) is not a routine part of clinical anesthesia care, there is growing evidence that readily visible changes in the anesthesia-induced EEG are intimately linked to perioperative brain health.

Induction of general anesthesia with propofol produces stereotyped oscillations or waves in the EEG that change form in a dose-dependent manner related to the patient’s state of consciousness (Anesthesiology 2015;123:937-60). After administering an induction dose of propofol, as a patient becomes sedated, the EEG begins to show small beta oscillations, which alternate at a frequency between 12 to 25 cycles per second (Hz). Soon after, when the patient loses consciousness, a combination of alpha (8 to 12 Hz) and slow (~0.5 to 1 Hz) oscillations develop (PNAS 2013;110:E1142-51). Beyond this point, if the propofol concentration continues to rise, burst suppression may develop, characterized by flat segments in the EEG that interrupt the pattern of slow and alpha oscillations (Anesthesiology 2015;123:937-60). Burst suppression is a state of brain inactivation beyond what is required to maintain unconsciousness. Similar patterns can be seen with inhaled anesthetics such as sevoflurane, which share a common underlying GABAergic molecular mechanism with propofol (Anesthesiology 2015;123:937-60). Other anesthetic drugs, such as ketamine or dexmedetomidine, have their own distinct “EEG signatures” that stem from their unique molecular and brain circuit mechanisms (Anesthesiology 2015;123:937-60). These unmistakable EEG waveforms are among the largest EEG signals that one might encounter in medical science and seem to relate directly to the mechanisms by which anesthetic drugs alter brain function. In the awake, conscious state, neural oscillations play a fundamental role in coordinating or organizing brain functions such as sensory processing, attention, cognition, and memory (Front Hum Neurosci 2010;4:194). Anesthetic drugs appear to disrupt the oscillations that serve those functions. The propofol-induced alpha wave, for instance, appears to be generated in prefrontal cortical and thalamic circuits that ordinarily work at gamma frequencies (25 to 40 Hz or higher) to mediate higher-level cognitive functions (PNAS 2017;114:E6660-8). This prefrontal circuit’s function is thought to be compromised when it is slowed down by propofol to alpha frequencies. The propofol-induced slow oscillation provides an even more powerful disruption of brain function: each cycle of the slow oscillation is synonymous with sustained periods where cortical neurons are unable to fire, essentially silencing brain activity every one to two seconds (PNAS 2012;109:E3377-86). These slow oscillations would therefore disrupt the sensory “contents” of consciousness when they occur in posterior cortical areas that mediate sensory function and impair cognitive function and arousal when they are observed in prefrontal cortical areas (Sci Rep 2020;10:13701). It is astonishing that we can see these phenomena in real-time in the EEG during anesthesia care.

“Are there interventions in the OR that make a difference in postoperative neurocognitive outcomes? The jury is still out, but there is evidence that EEG-guided anesthesia care can reduce the incidence of postoperative delirium, if and only if the EEG-guided care significantly reduces anesthetic exposures.” 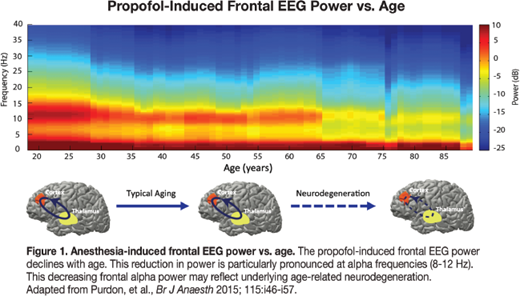 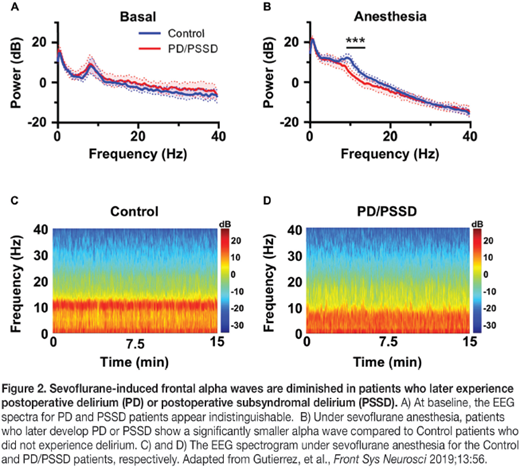 Are there interventions in the OR that make a difference in postoperative neurocognitive outcomes? The jury is still out, but there is evidence that EEG-guided anesthesia care can reduce the incidence of postoperative delirium, if and only if the EEG-guided care significantly reduces anesthetic exposures. In the CODA and BALANCED trials, EEG-guided care reduced MAC-fraction anesthetic exposures by 0.36 and 0.2 MAC, respectively, compared to standard care, leading to 8.5% and 9% absolute reductions in delirium incidence, respectively (J Neurosurg Anesthesiol 2013;25:33-42; Br J Anaesth 2021;127:704-12). Conversely, in the ENGAGES trial, a smaller 0.1 MAC reduction in anesthetic exposure led to no difference in delirium incidence (JAMA 2019;321:473-83). These results may not generalize to all surgical populations and scenarios: The recent SHARP trial found no difference in delirium incidence in patients randomized to EEG-guided sedation with spinal anesthesia versus general anesthesia during lumbar spine surgery (Anesthesiology 2021;135:992-1003). Last year, an expert consensus on perioperative brain health declined to recommend considering EEG monitoring for patients at high risk for postoperative neurocognitive disorders, citing the cost of the EEG as a major concern (Br J Anaesth 2021;126:423-32). However, concerns about cost should be nested in a holistic view of a benefit-cost analysis over time. A recent analysis reported that patients who experience postoperative delirium after elective surgery incur $44,291 higher annual health care costs than those without delirium (JAMA Surg 2021;156:430-42). EEG sensors used for anesthesia monitoring cost somewhere between $10 to $30, and the EEG machines can be obtained free of charge, or for a few thousand dollars at most. If the results of the CODA and BALANCED trials are taken at face value, and if even a small fraction of the 8% to 9% reported reduction in postoperative delirium were achieved, it would save the health care system hundreds to thousands of dollars per patient in exchange for the trivial price of an EEG sensor. Moreover, some fraction of the human suffering that patients and their families endure from postoperative delirium could be eliminated. A greater concern about existing processed EEG monitoring devices stems from their apparent lack of accuracy when used on older patients: Patients over the age of 60 are between 4.8- to 10.6-fold more likely to experience burst suppression even when the processed index is maintained within the recommended range of values (Br J Anaesth 2011;107:749-56). Even so, in the near-term, existing technologies can apparently make a difference. And given all that we are learning about the aging brain under anesthesia, newer technologies may one day enable more precise, personalized anesthesia care and better outcomes for older patients.