Airway catheters are used to facilitate endotracheal intubation in difficult airway situations or to exchange an endotracheal tube (ETT). Two different types of airway catheters are commercially available: ETT introducers and ETT exchange catheters. ETT introducers, or bougies, are relatively short and have a stiff angled tip to aid insertion through the vocal cords. ETT exchange catheters are usually longer, come in a variety of diameters, and have a straight soft tip. Bougies are used interchangeably with ETT exchange catheters. Complications from airway catheters include minor mucosal, tracheobronchial, and esophageal injury.1-3 The incidence of pneumothorax during emergent management of a difficult airway ranges from 0.04% to 0.1%.3 Mechanisms vary but are related to either barotrauma or direct airway injury caused by the intubating device.4

A 54-year-old, 81-kg, 161-cm woman presented for a cadaveric kidney transplant. Medical history included hypertension and end-stage renal disease. Preoperative chest x-ray was normal. Airway examination revealed a Mallampati class III small mouth opening and short neck with a thyromental distance less than 3 fingerbreadths. After preoxygenation, general anesthesia was induced with midazolam, fentanyl, propofol, and cisatracurium. First-attempt direct laryngoscopy resulted in a grade 3 Cormack-Lehane (CL) view and esophageal intubation, which was immediately recognized and the ETT removed. A GlideScope (Verathon) was used for the second attempt but resulted in a grade 2b CL view. The ETT with a GlideRite stylet (Verathon) could not be passed through the vocal cords. A different provider attempted GlideScope-assisted laryngoscopy a third time and was able to pass a 7.0-mm ETT through the vocal cords over a 15 Fr 70-cm coude tip gum-elastic bougie (SunMed). Positive end-tidal carbon dioxide (CO2) and equal bilateral breath sounds confirmed successful intubation of the trachea. The ETT was secured at 20 cm at the lips. 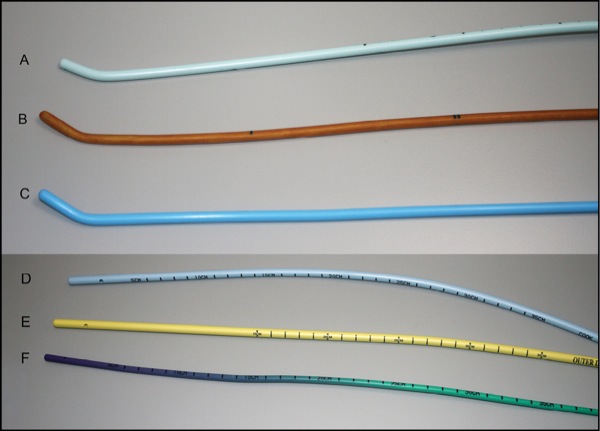 A cuff leak was noted and damaged cuff suspected. An ETT exchange with a new 7.0-mm ETT (Mallinckrodt) was performed over the same bougie. There was no perceived resistance during the exchange, but a small amount of blood was noted on the removed ETT. The new ETT was also secured at 20 cm at the lips. Mechanical ventilation was initiated in volume-controlled mode (tidal volume [VT], 500 mL; respiratory rate, 10/min; positive end-expiratory pressure, 5 cm H2O). Approximately 10 minutes after reintubation, the patient’s saturation gradually decreased to 82% while peak airway pressure increased to 46 cm H2O. With an inspired VT set for 500 mL, the expired VT was only 350 mL. End-tidal CO2 increased from 38 to 46 mm Hg. Intraoperative chest x-ray demonstrated right main stem intubation, right pneumothorax, left lung volume loss, and a stomach distended with air.

The ETT was withdrawn and secured at 17 cm at the lips. Fiber-optic bronchoscopy was performed confirming the position of the tip above the carina and no obvious damage to the conductive airways. After a right chest tube was placed, oxygenation and ventilation improved, and surgery was completed uneventfully.

CT of the chest performed after the event demonstrated the length of the patient’s trachea, from carina to the level of the cricoid cartilage, to be less than 9 cm. This is short, even for a 161-cm patient.

Although pneumothorax can be caused by endobronchial intubation, the incidence with traditional ventilator settings and normal lung anatomy is low. In fact, VTs similar to 2-lung ventilation have been used during 1-lung ventilation for thoracic surgery.6,7 There was no pulmonary disease in our patient, but CT demonstrated a short vocal cord-to-carina distance. The short tracheal length may have resulted in the distal tip of the bougie being beyond the carina. The pneumothorax could have been caused by inadvertent insertion of the bougie into one of the segmental or subsegmental bronchi when the ETT was passed over it, during either tube insertion or tube exchange.

The 2 most commonly used ETT introducers are the Eschmann introducer, known as the “Portex introducer” (Smiths Medical) (Figure, A and B), and the single-use ETT introducer (SunMed), which was used in this case (Figure, C). Both devices have a stiff angled tip to aid passage of the ETT. This coude tip also allows the user to feel the “clicks” from anteriorly located tracheal rings, thus confirming the intratracheal position. If the angled tip is directed posteriorly toward the muscular layer of the trachea, or advanced beyond the carina where cartilaginous rings are small or absent, airway injury can occur. Because bougies are not hollow, they cannot serve as a conduit for oxygen delivery. As a result, ETT introducers are not specifically designed to be used as tube exchangers; however, bougies are the device most readily available in most institutions.

There is no consensus in the literature regarding the depth of insertion of exchange catheters. Difficult Airway Society difficult extubation guidelines recommend a maximum insertion depth of 25 cm.10 The 4th National Audit Project report recommends insertion no further than 26 cm.11Scott and Hung cite 30 to 35 cm.12 Some authors mention the technique of advancing a bougie until resistance is met and subsequently passing an ETT over the bougie.12,13 In our case, even with the commonly accepted and most conservative recommendation for bougie insertion depth (25-26 cm at the teeth), insertion into a main stem bronchus would have been the result due to the short tracheal length. The Cook instructions state that “attention should be paid to insertion depth and the catheter should not be advanced beyond the carina.”14

We reviewed several YouTube-based videos demonstrating bougie techniques.15-17 These videos provide no information regarding either depth of bougie insertion or risks for adverse events. The videos have not been peer reviewed and do not demonstrate a best technique. The best technique for using an airway exchange catheter is presented in a Cook Medical video, which demonstrates how length markings on the exchange catheter should be aligned with markings on the ETT.18 Unfortunately, some ETTs are not transparent enough to allow this. Providers should be aware that a bougie tip can be displaced distally during ETT advancement or get misdirected through the Murphy eye vent, causing injury to the tracheal wall.

Dr Nisnevitch-Savarese is assistant professor, Dept. of Anesthesiology and Perioperative Medicine, and Dr Vaida is professor of anesthesiology, obstetrics, and gynecology, and vice chair for research and director of obstetric anesthesia, at Penn State Milton S. Hershey Medical Center, in Hershey, Penn.