Author: Thomas R. Miller, PhD, MBA
ASA Monitor May 2022, Vol. 86, 1–11.
I wrote this column in February, that exciting time of the year when most publicly traded companies submit Form 10-K to the U.S. Securities and Exchange Commission. The 10-K is a comprehensive report filed each year to inform potential investors about a firm’s financial condition. So, I reviewed the 10-Ks of the largest publicly traded health insurance companies as I was curious about their financial health.1 In 2021, the six largest companies racked up more than $1,102,000,000,000 in revenues, a 23% increase over just two years earlier. These six companies, listed in descending order of 2021 revenue, are CVS Health Corporation, UnitedHealth Group Incorporated, Cigna Corporation, Centene Corporation, Anthem, Inc., and Humana Inc. 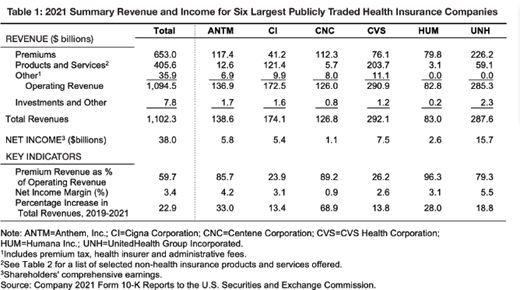 Figure 1 presents the relative stock price performance of these six companies from January 2, 2020, to March 30, 2022. Even through the COVID-19 pandemic, the companies’ stock prices have kept pace with the S&P 500®, with three of the six insurers having higher returns and three having lower returns over these 27 months (see Figure 1). 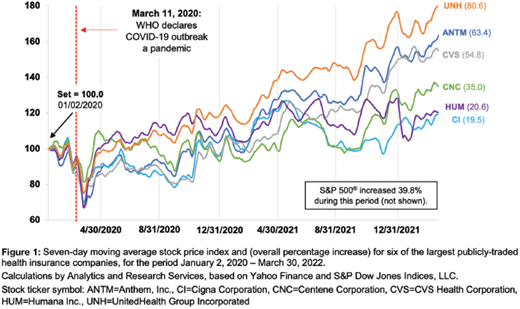 Most of the revenues of these companies are from insurance premiums; however, approximately three-fourths of revenues from Cigna and CVS Health are from related products and services and not from health insurance. Table 2 provides a brief description of how each company self-identifies in its 10-Ks and a list of selected non-health insurance products and services provided by these companies. Of particular interest to anesthesiologists may be UnitedHealth Group’s ownership of more than 230 ambulatory surgery centers and surgical hospitals. In addition, UnitedHealth Group has purchased numerous physician groups and seeks to have the largest physician network in the U.S. 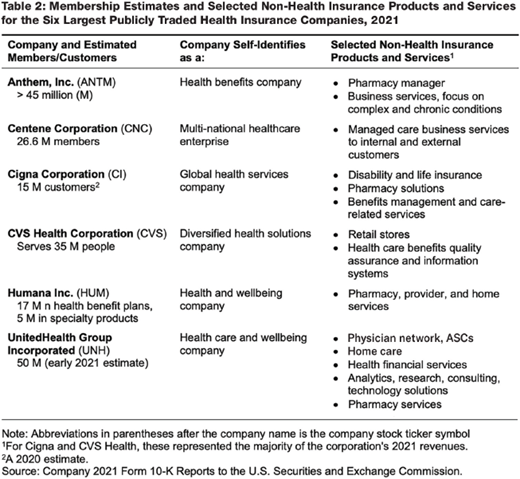 Not surprisingly, a large health insurance company’s CEO is well compensated. Interestingly, the CEOs of four of these six insurance companies are on the list of “The 100 Most Overpaid CEOs” (asamonitor.pub/3vGSm4g). The company rankings in the 2021 top 100 most overpaid CEOs are Centene (23), UnitedHealth Group (54), CVS Health (55), and Cigna (85).

Fortunately, the mission statements of these companies are likewise grand. The insurance companies seek to improve the health of humanity, help people achieve well-being, and help make the health system work better for everyone. However, it is unclear how well a company’s stock price or CEO compensation reflects success in achieving these goals.

Growth through acquisitions and court challenges

Centene expanded its health insurance presence with the January 2020 acquisition of WellCare. WellCare had approximately 5.5 million members in 2018 and focused on Medicaid, Medicare Advantage, and Medicare prescription drug health plans. In January 2022, Centene acquired Magellan Health for $2.6 billion to expand Centene’s presence in behavioral health and other complex health populations.

UnitedHealth Group has completed many acquisitions in the past five years as part of its overall growth strategy. In January 2021, UnitedHealth Group’s Optum Insight unit agreed to acquire Change Healthcare for approximately $13 billion. Change Healthcare offers analytics, clinical claims management, and technology-enabled services to commercial and governmental payers, employers, hospitals, physicians, and consumers. I think the term “big data” grossly understates the amount of claims-related information the company can access. Change Healthcare reported $3.1 billion in revenue for the fiscal year ended March 31, 2021. On February 24, 2022, the Department of Justice (DOJ) filed a civil lawsuit to stop the merger. As this article was being finalized in March, the DOJ indicated that the proposed transaction would harm competition in commercial health insurance markets and in the market for technology used to process health insurance claims (asamonitor.pub/3IIT70k).

The rest of the top 10 largest health insurance companies

The other health insurance companies that typically make the “top 10 largest” list (e.g., asamonitor.pub/3Cd11MO) are:

Insurance companies are big and relatively concentrated, and they get bigger and more concentrated each year. Partially in response to the concentration and scale in the insurer market, health systems and physician groups have followed suit with acquisitions and consolidations. In addition, the lines between health care providers and insurers continue to blur. Despite laudable missions of improving the health of humanity, improving the quality of care, and lowering costs, the economic drivers in the health care industry are substantial. The total revenue growth for the six largest health insurance companies almost doubled in the last five years (an 89.4% increase between 2016 and 2021). I’m curious what the landscape will look like five years from now.