Occipital nerve blocks into the C2-C3 facet joint have proven to be a safe and effective form of treatment for occipital neuralgia.1 The third occipital nerve crosses the C2-C3 joint opposite the C3 superior articular process at its center.2 Direct complications from cervical facet joint blocks are rare, and include intravascular injection, infection and, more rarely, intrathecal injection.2,3 Intrathecal injection can lead to high spinal anesthesia, a medical emergency that can result in bradycardia, asystole and/or cardiopulmonary arrest.4 Early recognition and intervention are crucial to reducing morbidity and mortality. We report the use of high spinal anesthesia and subsequent cardiopulmonary arrest in a patient receiving a fluoroscope-guided bilateral C2-C3 occipital nerve block. The patient was managed with cardiopulmonary resuscitation (CPR), intubation and vasopressor support.

The patient is a 40-year-old woman (129 kg) with a medical history of chronic migraines and occipital neuralgia who presented to her neurologist with severe daily headaches in the occipital and cervical regions (Figures 1 and 2). The headaches were unresponsive to conventional medications, including amitriptyline, gabapentin, propranolol, topiramate and sumatriptan. The patient denied a history of trauma to the cervical spine. Ultimately, the patient was referred to interventional radiology for a fluoroscope-guided bilateral C2-C3 occipital nerve block. 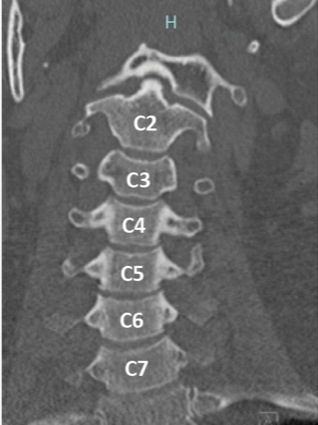 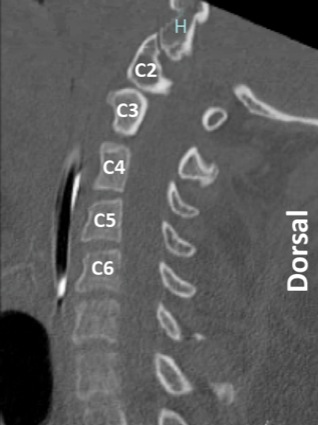 Preliminary fluoroscopic examination of the cervical spine showed no abnormalities. With the patient in the left lateral position, she was prepped and draped in the normal sterile fashion; and 1% lidocaine was infiltrated into the skin and subcutaneous tissue. A 21-gauge, 7-cm echogenic spinal needle was then advanced through the C2-C3 facet joint along the posterior aspect. After confirmation of the needle tip under fluoroscopy and negative aspiration of cerebrospinal fluid or blood, 2-mL 0.5% bupivacaine and 2-mL betamethasone (6 mg/mL) were injected. The needle was then removed and a dressing applied. The same procedure and technique were performed on the contralateral side with the patient in the right lateral decubitus position.

After the second injection, the patient first complained of difficulty breathing and then became less responsive, with increased work of breathing. Supplemental oxygen was placed. She was then noted to be flaccid and apneic. Pulses could not be palpated, so CPR was initiated and a “code” was called. Return of spontaneous circulation (ROSC) was achieved after one cycle of CPR. Upon arrival by the anesthesia response team, the patient remained apneic and severely hypotensive (mean arterial pressure, 40-50 mm Hg). She was unable to move any of her extremities, but was able to track with her eyes. On the basis of her respiratory dynamics, the decision was made to intubate and sedate her.

The patient was subsequently started on a propofol (50 mcg/kg per minute) and phenylephrine (0.4 mcg/kg per minute) drip. She was transferred to the emergency department, where she was weaned off the phenylephrine drip within an hour. After approximately two hours, the patient began to regain motor and respiratory function, and was liberated from the ventilator on 2 L of oxygen via a nasal cannula. She was admitted to a general medical floor for close observation.

Computed tomography of the cervical spine was subsequently obtained and demonstrated cervical lordosis maintained without subluxation. Her craniocervical junction was maintained and vertebrae were all normal in height. A small amount of air was seen in the dorsal spinal canal abutting the C3 spinous process in the midline, and in the left lateral paraspinal soft tissues, both of which were consistent with the procedure the patient had undergone.

Over the course of the night and the following day, the patient regained her strength, ambulated independently, and tolerated a diet. Her only complaint was mild sternal pain. One day after her procedure, arrest and successful resuscitation, she was discharged home.

Cardiopulmonary arrest is a rare event during spinal anesthesia cases, ranging from 1.3 to 18 events per 10,000 cases.4 The mechanism for this event is still unclear, but it is believed to be caused by blockade of the sympathetic tract of the spinal cord secondary to an intrathecal injection of local anesthetic. Blockade of the sympathetic spinal tract above the T1 level can cause unopposed vagal stimulation leading to bradycardia and asystole. It also can lead to severe peripheral vasodilation of the venous system and decreased preload to the heart. Some of the risk factors for the occurrence of bradycardia during spinal anesthesia include the following:

In this case, the patient received a fluoroscopically guided C2-C3 spinal nerve block at the facet joint. Facet joint blocks have been shown to be safe with few major complications. A prospective case review of 7,500 facet joint blocks at an ambulatory surgery center showed no major complications.5 Some minor complications were noted, with local bleeding in 70% of cases, oozing in 19.6% of cases, and intravascular injection of anesthetic in 11.4% of cases. Intravascular injection was significantly higher in the cervical region.5 Only one other case study showed cardiopulmonary arrest of a patient after facet joint block. In this case, the procedure was done at the C4 level for a case of cervical arthropathy, and demonstrated rapid recovery without any sequelae.3

Management of high spinal anesthesia, bradycardia and cardiopulmonary arrest are documented in the obstetrics literature due to the frequency of epidural and spinal nerve blocks in obstetric procedures. Guidelines for management of events related to high spinal anesthesia include that the patient should immediately be sedated, intubated and put on 100% oxygen. If the patient is hypotensive, fluids and vasopressors can be used to achieve hemodynamic stability. Atropine can be used for episodes of bradycardia.6,7

To our knowledge, no cases in the literature show an episode of high spinal anesthesia and cardiopulmonary arrest during facet joint blocks at the C2-C3 level for occipital neuralgia. The patient in our case had no anatomic or demographic risk factors for the event, highlighting the need for ample preparation “before” performing a facet joint block on “any” patient. Management of high spinal anesthesia is guided by obstetric guidelines.

In our patient’s case, the event was managed with CPR. After ROSC in the patient, she was intubated, ventilated, and a propofol and phenylephrine drip was started. Once the patient’s high spinal anesthesia wore off, she exhibited no focal neurologic deficits and her respiratory dynamics returned to baseline.

Our management proved that high spinal anesthesia in a nonobstetric setting can be managed with obstetric emergency guidelines. Going forward, it is imperative to recognize the potential risks involved with facet joint nerve blocks and be prepared to intervene in a timely manner.