Disclaimer: Viewers of this material should review the information contained within it with appropriate medical and legal counsel and make their own determinations as to relevance to their particular practice setting and compliance with state and federal laws and regulations. The APSF has used its best efforts to provide accurate information. However, this material is provided only for informational purposes and does not constitute medical or legal advice. This response also should not be construed as representing APSF endorsement or policy (unless otherwise stated), making clinical recommendations, or substituting for the judgment of a physician and consultation with independent legal counsel. 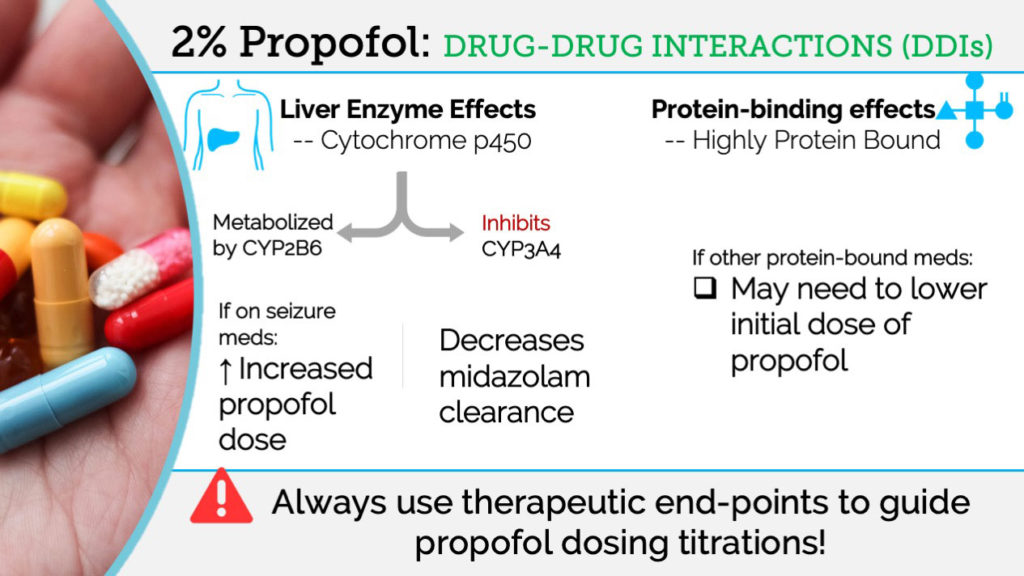 Amidst the COVID-19 pandemic and an unexpectedly high sedative requirement in effected mechanically ventilated patients, many manufacturers are experiencing shortages of propofol 1% (Diprivan),1 a mainstay anesthetic during mechanical ventilation and induction of anesthesia. On May 8, 2020, the US Food and Drug Administration (FDA) issued an Emergency Use Authorization (EUA) for the use of propofol 2% emulsion (Propoven).2 This article will review safety for use considerations of this double concentrated propofol emulsion product. 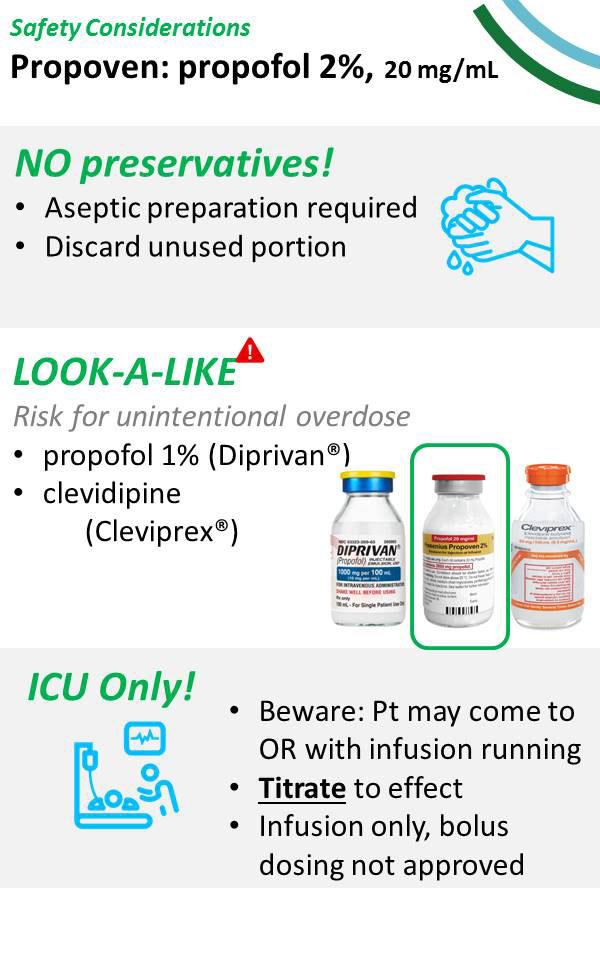 This double concentrated 2% propofol solution (20 mg/ml) is currently available by direct order from the manufacturer, Fresenius Kabi, as 100 ml vials (Propoven 2%) under EUA for use in patients greater than 16 years of age, requiring mechanical ventilation, in the intensive care unit setting only.3 It is labeled for use only by continuous infusion. Unlike standard 1% propofol, the Propoven 2% product is not indicated for use in general anesthesia or procedural sedation.

As Propoven 2% contains twice the concentration of standard propofol 1%, there is risk for potential overdose if vials are inadvertently interchanged. The FDA warns propofol 2% vials may not be shipped with functional barcodes. Barcoded medication administration technology reduces the estimated 35% medication errors that occur at time of administration.4 As such, the FDA recommends institutional pharmacy manually generate and label propofol 2% to ensure accuracy and safety for barcoded medication administration. Infusion pumps and drug libraries must also be updated with this new concentration to help limit risks.

Despite these safeguards, introducing a new concentration may not change clinician practices in dose and infusion rate titrations if practices have been seated in volume-based dosing decisions and administrations. Accordingly, one center found a nearly 50% increase in propofol consumption (on a mg/hr basis) following conversion from propofol 1% to propofol 2% in their intensive care unit.5 It is advisable that practices use concentration-based dosing schema to avoid over-sedation, increased triglyceride exposure, and increased drug utilization.

Furthermore, there are potential look-alike concerns between Propoven 2%, standard 1% propofol, and the antihypertensive calcium channel antagonist clevidipine (Cleviprex).6 All three of these products are available in 100 ml vials, are formulated in lipid emulsion, and appear milky white in clear glass vials. 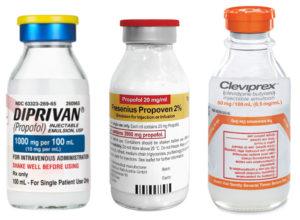 Propoven 2% does not contain antimicrobial preservative excipients and must be handled with strict aseptic technique, and unused portions discarded immediately. One study found the emulsion supported growth of many different nosocomial microorganisms including Staphylococcus aureus, Enterococcus faecalis, Escherichia coli, Pseudomonas aeruginosa, and a clinical strain of multi-drug resistant Acinetobacter spp.7 Microbial growth occurred as soon as 4 hours at temperatures as low as room temperature (22oC). Propoven 2% vials are therefore intended for single use and should not be re-accessed after initial entry, owing to their use restricted as continuous infusion only. Once initiated for continuous infusion, vials and tubing should be replaced on a 12-hourly basis.

Propoven 2% contains the same total fat load by volume as propofol 1% (0.1g/ml). A study of 50 mixed medical and surgical critically ill patients found that an approximate 2-day infusion of propofol 2% did not significantly raise serum triglyceride concentrations.8 Despite a nearly 60% lower daily lipid exposure with use of propofol 2% and lower incidence of hypertriglyceridemia compared to propofol 1%, a study of propofol used for greater than 3 days found there were no differences in the mean cholesterol or triglyceride increases between the two formulations.9 In another study of sedation following coronary artery bypass grafting, no differences in triglycerides or cholesterol were noted with propofol 1% and 2% when used for less than 12 hours.10

Although not fully elucidated, propofol-related infusion syndrome (PRIS) is believed to be a result of dysregulated fatty acid metabolism and inhibition of mitochondrial respiration.11 Therefore, provision of high lipid load and inadequate carbohydrate stores may increase the risk of PRIS and should be considered in the context of critical illness, especially patients with poor pre-operative nutritional status. Additionally, common perioperatively administered corticosteroids and catecholamine vasopressors may further increase risk of PRIS.11 The most common manifestations of PRIS include metabolic acidosis, hemodynamic collapse, renal failure, lipemia, and rhabdomyolysis.11 If suspected, propofol should be discontinued and alternative sedatives should be utilized. The risk for PRIS with propofol 2% is unknown and it is recommended that dosing not exceed 4 mg/kg/hr to reduce the risk.11 Secondary to limited familiarity with this formulation it will be important for users at the bedside to report their experiences and it is encouraged to report any adverse events and/or medication errors directly to the FDA.

Propofol is predominantly metabolized in liver microsomes by the cytochrome P450 (CYP) enzyme, 2B6 subtype, which accounts for the majority of interpatient variability in propofol metabolism.12 Patients with certain variants in the gene that encode CYP2B6 that are responsible for reduced metabolic activity, may require up to 15% less Propofol compared to those with normal, wildtype metabolic function.13 Clopidogrel, an antiplatelet agent commonly used following percutaneous coronary intervention and cardiac surgical patients undergoing coronary artery bypass grafting, is an inhibitor of CYP2B6 and may result in reduced propofol metabolism.14 As baseline genomic panels are unlikely to be available in the majority of surgical patients, up-titration to the lowest effective dose may serve as a suitable mechanism for tailoring propofol dosage in the context of interpatient variability and drug-drug interaction by CYP2B6 inhibition mechanisms. The anticonvulsants—phenytoin, carbamazepine, and phenobarbital—are strong inducers of the CYP2B6 isoenzyme, and may accelerate propofol metabolism.15 As enzyme induction is a time-dependent process relative to drug half-life, these interactions are not clinically relevant when these anticonvulsants are administered acutely. However, this should be considered for patients presenting to the operating theatre or intensive care unit who are on these agents chronically as the enzymatic processes should be sufficiently induced. Theoretically, these patients may require higher dosages of propofol, and therefore again, titration to effect is warranted.

Propofol itself is an inhibitor of the CYP3A4 subtype, leading to clinically relevant drug-drug interactions that should be noted. Propofol has been found to decrease midazolam clearance by over one-third and prolong its half-life by nearly two-thirds through its CYP3A4 inhibitory effects.16 This may lead to undesired prolonged sedative effect.

Propofol has extensive protein binding of upwards of 97 to 99%, predominately of which is albumin.17 If binding sites are pre-occupied with other highly protein bound drugs, this may lead to higher unbound propofol available, allowing for greater therapeutic effect. Therefore when co-administered with other highly protein-bound medications, lower dosages of propofol may be sufficient to achieve the desired therapeutic effect. Although limited data are available to support this, an in vitro study found a significant increase in protein-unbound-free propofol in serum samples containing valproic acid with both low and normal amounts of serum albumin.18 Other agents commonly used in the perioperative setting with high protein binding include antimicrobials (penicillins, echinocandin antifungals, amphotericin), benzodiazepines, dexmedetomidine, calcium channel blockers, amiodarone, loop diuretics, and phenytoin (typically continuation of chronic therapy).19 While these effects are likely impactful on a physiologic level in the brief acute period, they are unlikely to net meaningful clinical changes in the critically ill patient receiving continuous propofol during mechanical ventilation. Accordingly, anesthesia professionals should utilize therapeutic end-points (e.g., level of desired depth of sedation by clinical scale of choice, ventilator parameters, etc.) to guide propofol dosing rate titrations.

Furthermore, other medications with clinically additive therapeutic effects may result in unintentional toxic effects. This includes co-administration with other analgesics, sedatives, or anesthetics which may lead to an increase in the anesthetic or sedative effects of propofol, as well as increase the rate of apnea. These include commonly utilized agents in the intensive care unit such as opioids, benzodiazepines, barbiturates, and also any other known central nervous system depressants. To achieve desired effects when in combination with these agents, lower dosages of propofol may be sufficient.

Why is a thorough review of the administration, pharmacodynamics, and pharmacokinetics of propofol 1% and propofol 2% important for clinicians at this time?

First, the vast majority of anesthesia professionals are generally quite comfortable with the “routine” use of propofol 1% for sedation and induction and maintenance of anesthesia in both the operating room and the ICU. But these are not routine times! This cohort of patients is often elderly, medically complex, and desperately ill. It is distinctly important to be aware of the parameters and potential difficulties in using either propofol 1% or propofol 2% when planning therapies and assessments – such as surgeries and procedures, ventilation management strategies including weaning, patient mobilization, and mental status checks.

Second, there is an increased chance of medication error and inadvertent over-administration as noted above.

Third, hospitals and health care systems are likely to continue to experience wildly fluctuating levels of COVID-19 clinical acuity as the timeline of the pandemic progresses. We are far from being out of the woods. Anesthesia professionals, therefore, may be consulting and/or collaborating with clinicians in the perioperative period or in the ICU who are not formally trained in anesthesia or ICU disciplines and who do not have the deep experience with propofol that we do. Now is the time for anesthesia clinicians to thoroughly review and understand the basic principles before discussing or explaining them to other medical professionals.