“[In mechanical ventilation,] power may be a better marker of lung injury than isolated parameters such as tidal volume, driving pressure, or respiratory rate.” 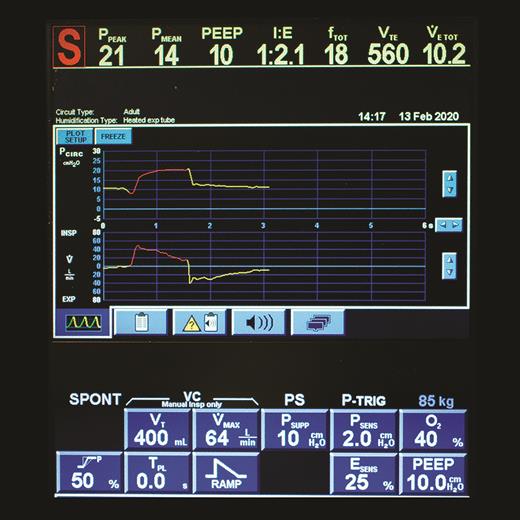 The concept of elastic and resistive energy transfer from mechanical ventilators to the respiratory system, along with the modulation of expiratory flow as a means to reduce the energy dissipated by the lungs, was presented as conference contribution at the 2010 German Congress of Anesthesiology (Nuremberg, Germany).  About 5 yr thereafter, stress versus time product, a surrogate of the elastic component of mechanical power, was shown to increase gene expression of biologic markers of lung inflammation and cell injury in rats.  However, mechanical power was formally described first in 2016, along with data from swine showing that energy transferred from the ventilator to the respiratory system produces time-dependent lung injury, especially edema.  Since then, the concept of mechanical power has contributed to understanding ventilator-induced lung injury by clarifying that multiple factors combine to promote lung injury. The clinical correlate is that excessive focus on a single parameter, such as tidal volume, may be suboptimal. Furthermore, restricting individual mechanical ventilator settings to protective ranges may nonetheless provoke lung injury because several parameters might sum to potentially harmful power. On the other hand, experimental data in rats suggest that limiting mechanical power may be insufficient if a single component—for example, tidal volume—exceeds safety limits. Thus, protective mechanical ventilation seems to require that individual components be set at safe levels and that their summed contribution—expressed as mechanical power—not be excessive.

In this issue of Anesthesiology, Santer et al. contribute a retrospective analysis of 230,767 adults who had elective noncardiac surgery with general anesthesia between 2008 and 2018 in two academic hospitals.  The authors found that both higher mechanical power and temporal increases of mechanical power during anesthesia were associated with postoperative respiratory failure requiring intubation. These findings advance our understanding of ventilator-induced lung injury, and are generally consistent with critical care studies suggesting that mechanical power is associated with adverse outcomes, including death.

Santer et al.  used an equation developed 2021 for epidemiologic studies,7  which includes three basic terms. One term expresses a “static” component—that is, the contribution of positive end-expiratory pressure (PEEP) or stored energy. The second term reflects the energy needed to overcome resistance to airflow. The third term describes the energy dispended to expand the lungs, thus representing the elastic component of lung expansion. The three terms are summed and divided by time to yield power, usually in units of joules per minute.

PEEP is among the terms in the mechanical power equation Santer et al. used, but PEEP does not contribute to movement of air, and therefore does not directly augment mechanical power, as shown recently in a theoretical essay.  There are, nonetheless, at least two mechanisms by which PEEP can injure lungs. First, it increases energy stored in the lungs, although the contribution of stored energy to lung injury remains poorly characterized. Second, PEEP influences the amplitude of tidal volume and driving pressure depending on the elastic properties of the respiratory system. Thus, the existence of a “static component” of mechanical power is questionable.

In the study by Santer et al.  the association of mechanical power with respiratory failure and intubation remained after adjustment for various ventilatory variables, suggesting that power may be a better marker of lung injury than isolated parameters such as tidal volume, driving pressure, or respiratory rate. The elastic component was the only term in the equation for mechanical power that was individually significantly associated with outcome, leading the authors to conclude that is the most informative component of mechanical power. However, the point estimates for the contributions of each component were similar, ranging from 1.23 to 1.35 odds, suggesting that the contributions of elastic, resistive, and static components are in fact roughly comparable.

Santer et al.  convincingly confirm their primary hypothesis that mechanical power is associated with lung injury. Associations can be valuable because they help clinicians anticipate events, but it is also worth considering that the difference in primary outcome between the lowest and highest quintiles was 1.1 minus 0.7% = 0.4%, which corresponds to a number needed to treat of 250 even assuming that patients can be moved across so many quintiles, which seems unlikely since power is probably mostly determined by individual patient need. Furthermore, the range of mechanical power exposure was narrow, and most patients received a very reasonable set of ventilator parameters. As a result, the quintiles did not differ markedly.

Santer et al.  also report that intraoperative increases in mechanical power predict respiratory failure, but this finding resulted from exploratory analyses that were not adjusted for multiple testing. During a case, clinicians do not normally augment ventilation settings unless this is necessary to maintain adequate ventilation. It thus seems unlikely that the observed increase in power is a causal mechanism for respiratory failure. Importantly, there were substantial differences between the reintubation and reference groups, including, for example, American Society of Anesthesiologists (Schaumburg, Illinois) Physical Status (III vs. II), age (9 yr older), much more vascular surgery, more hypotension and vasopressor use, and a threefold greater Charlson comorbidity index. The authors adjusted for all these factors, but there were presumably other important factors that remain as unobserved confounding. Thus, while the association between increasing intraoperative power and respiratory failure is presumably accurate, it probably is not amenable to intervention and instead represents progressive lung failure.

As with all observational research, it remains unknown whether mechanical power is merely a marker of lung injury, or its cause. For example, high mechanical power may merely identify lungs that are already injured for reasons unrelated to mechanical ventilation such as obstructive disease or various comorbidities, or are worsening during anesthesia because of fluid overload or inflammation. Such subtle confounding is difficult or impossible to extract retrospectively from clinical records. The distinction between prediction and causality is crucial because interventions to reduce mechanical power will improve outcomes only if the relationship is causal. For example, observational associations between low intraoperative tidal volumes and moderate PEEP and improved clinical outcomes  have not been confirmed in randomized trials.