A retrospective study has cast doubt on the usefulness of adding gabapentinoids to multimodal analgesia after total hip or knee arthroplasty.

The study, conducted by researchers at Duke University Medical Center, in Durham, N.C., concluded that use of gabapentinoids was associated with increased odds of postoperative pulmonary complications, either used alone or in combination with other analgesics.

“The problem is we don’t know which combination is better than its individual components, or opioids alone,” Dr. Ohnuma said. “That’s why we wanted to investigate the association between these three drugs, both individually and in combination on the day of surgery.”

Previous randomized controlled trials, he noted, have assessed the effect of gabapentinoids on opioid consumption and pain scores, but they have not examined the rate of postoperative pulmonary complications.

Dr. Ohnuma and his colleagues extracted data from the Premier database, an administrative claims database that contains charge codes, billing codes, and codes from the International Classification of Diseases, Ninth Revision. The analysis included 862,524 patients (mean age, 65.6 years; 60.4% female) from 592 hospitals in the United States, who underwent elective primary THA or TKA between 2009 and 2014.

The patients received the study drugs on the day of surgery, alone and in combination, in the following seven predefined categories:

The researchers used multilevel models to measure any associations between use of these agents and the study’s primary outcome of postoperative pulmonary complications, including naloxone administration, noninvasive ventilation or invasive mechanical ventilation.

As Dr. Ohnuma reported at the 2019 annual meeting of the International Anesthesia Research Society (abstract D159), gabapentinoid use was associated with significantly increased risk for the composite of postoperative pulmonary complications (odds ratio [OR], 1.56; 95% CI, 1.48-1.64) compared with no exposure to the three drugs.

Interestingly, a similar increase in risk was seen with the other two-drug and three-drug analgesic combinations that included gabapentinoids (Figure). 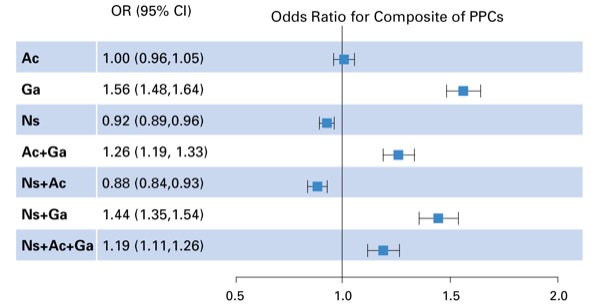 “Gabapentinoids have a sedative effect, which might be associated with more respiratory depression,” Dr. Ohnuma said. “For even when we used gabapentin alone or in combination with these other drugs, it was associated with a higher risk of pulmonary complications.”

In contrast, the combination of acetaminophen and NSAIDs was associated with a significantly decreased risk for postoperative pulmonary complications (OR, 0.88; 95% CI, 0.84-0.93), as well as the lowest amount of parenteral morphine equivalents (PMEs) on the day before discharge (–1.6 mg; 95% CI, –2.0 mg to –1.2 mg).

Except for the significant findings, there was little difference between groups in the composite of postoperative pulmonary complications, hospital length of stay, and PMEs on the day of surgery or day before surgery (Table).

“So the gabapentinoids had no opioid-sparing effects, but were found to have higher rates of postoperative pulmonary complications,” Dr. Ohnuma said in an interview with Anesthesiology News. “There was no clinically meaningful difference between length of stay and opioid consumption on the day of surgery.”

Despite these findings, Dr. Ohnuma noted that gabapentinoids are still routinely used in ERAS protocols, even at his own institution. “We have to keep in mind that this is retrospective research, not a randomized controlled study,” he said. “So this just shows an association, not causality, so we may need to do some bigger randomized controlled trials.

“I still think gabapentin has some effect as an analgesic,” he added. “It may have some utility in younger patients, or in those with higher levels of pain or with no comorbidities.”

Yet as Stavros G. Memtsoudis, MD, PhD, MBA, discussed, gabapentin may have little usefulness as part of multimodal analgesia in most patients. “Gabapentin is intended to treat neuropathic pain,” said Dr. Memtsoudis, the director of Critical Care Services in the Department of Anesthesiology and a senior scientist at the Hospital for Special Surgery, in New York City.

“Nevertheless, many clinicians think it should be included in a routine multimodal regimen since it works differently than other drugs. So if the drug doesn’t really offer an added benefit, then you really just end up with its side effects,” Dr. Memtsoudis said. “I think that’s why we’re seeing these respiratory complications. Gabapentin doesn’t add much in terms of pain control, but it potentiates respiratory problems with opioids.”

Does gabapentin have a role in some patients? “Absolutely, because some of these people have legitimate neuropathic pain, and that’s what it’s meant for,” Dr. Memtsoudis said. “But as a routine adjunct to multimodal analgesia, probably not.”