Both pre-frail and frail patients have a significantly higher risk for delirium following cardiac surgery than their non-frail counterparts. Moreover, frail patients are at increased risk for cognitive decline 30 days after surgery, but these differences diminish at one year postoperatively.

“Postoperative delirium is common in the cardiac surgery population, with an estimated incidence of up to 50%,” said Andrew Laflam, BS, who at the time of the study was at the Johns Hopkins University School of Medicine in Baltimore, and now is a medical student at Tufts University School of Medicine in Boston. “Frailty is associated with poor outcomes, even in nonsurgical populations, and is also common in cardiac surgery patients.”

Delirium was assessed by various means, including the Confusion Assessment Method (CAM) and CAM-ICU. Neuropsychological testing was generally performed within two weeks of surgery, as well as four to six weeks and one year after surgery. Chart reviews were done on days when patients were not assessed in person.

Reporting at the 2018 annual meeting of the American Society of Anesthesiologists (abstract BOC06), Laflam noted that the final cohort involved 133 patients. Not surprisingly, pre-frail and frail patients were more likely to have congestive heart failure, higher logistic EuroSCORE (European System for Cardiac Operative Risk Evaluation) and surgical valve repair than their non-frail counterparts. 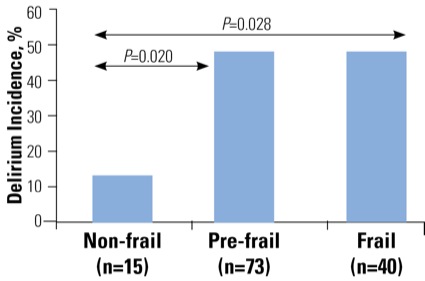 “Our secondary outcome was the change in cognition, which we assessed using the composite zscore,” Laflam said. Cognitive data were available from 83 patients. The study found that the decline in composite cognitive z score was greater from baseline to 30 days in frail patients than in non-frail patients in both univariate and multivariate models (beta coefficient, –0.35; 95% CI, –0.69 to –0.008; P=0.05). Despite this, by one year after surgery there were no differences in the association of baseline frailty with change in cognition (Figure 2). 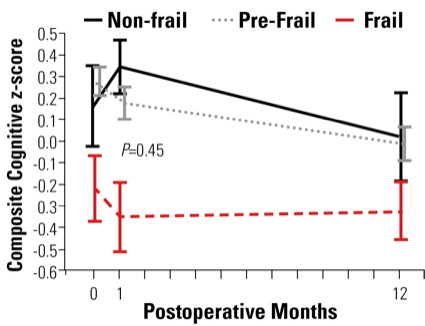 Although the researchers were confident of the study’s findings, they did mention its limitations. “First, we included patients from ongoing trials with similar but ultimately different inclusion criteria,” Laflam explained. “What’s more, cognitive data were missing at the one-year follow-up for 29% of our patients, and was only available for one of the two trials.”

“Frailty seems to be a risk factor for delirium in cardiac surgery patients,” he added, “but more research is needed to identify targeted strategies in order to improve outcomes in these patients.”

As Daniel I. McIsaac, MD, MPH, an assistant professor of anesthesiology at the University of Ottawa, in Ontario, told Anesthesiology News, these findings come as little surprise. “Frailty was recently identified as a top predictor of postoperative delirium in a systematic review from Watt and Straus,” Dr. McIsaac said (J Gen Intern Med 2018;33[4]:500-509). “Kim and Marcantonio have also shown frailty to be associated with adverse non-delirium outcomes after cardiac surgery” (Ann Intern Med 2016;165[9]:650-660).

Yet as Dr. McIsaac noted, the findings of the current study help frame what may be the most pressing question: how to address frailty in patients undergoing surgery in a way that meaningfully improves outcomes. “Almost by definition, frailty is associated with adverse outcomes,” he said. “So in terms of what to do about it, there are no clear answers … but many important questions that need to be addressed by perioperative researchers.”