Administering early preoperative and perioperative fascia iliaca blocks in geriatric patients with hip fractures resulted in one less day of hospitalization compared with a standard opioid protocol, according to a new study.

“While taking care of these patients, we noticed that their opioid intake can be quite high, both before and after surgery,” said co-principal investigator Carol Lin, MD, an assistant professor of orthopedic surgery at Cedars-Sinai Medical Center, in Los Angeles. “This can lead to increased complications and delayed discharge.”

Subsequently, Dr. Lin and her colleagues set out to test alternative pain management options in these hip fracture patients.

The study, which was presented at the 2019 annual meeting of the American Academy of Orthopaedic Surgeons (abstract PO479), involved patients with hip fractures who presented at Cedars-Sinai between July 2013 and December 2017. The average age of the group was 82.9 years.

A fellowship-trained regional anesthesia team performed either a one-time injection in 209 patients or a continuous catheter infusion in 61 patients of fascia iliaca blocks during the pre- or perioperative period. The remaining 1,003 patients constituted the historical control group.

Length of Stay a ‘Surprise’

“However, if patients received the block within seven hours of arriving at the emergency room, their hospital length of stay was reduced by one full day,” Dr. Lin said. “This finding came as a surprise.”

In addition, the investigators hoped to find a reduced rate of delirium, but that outcome was not seen. “I think a large part of not detecting a reduction is because we do not screen for or diagnose delirium very well in the hospital,” Dr. Lin noted.

The mechanism of action of a fascia iliaca block is largely the innervation of the hip capsule, which receives contributions from both the femoral and obturator nerves.

“The block also spreads to the lateral femoral cutaneous nerve, which covers postoperative incisional pain that might result from the surgery,” Dr. Lin said.

The authors hope that fascia iliaca blocks will become the standard of care for every hip fracture that ends up in any emergency department across the United States. “We want these blocks to become part of every geriatric fracture protocol,” Dr. Lin said.

In the meantime, the investigators are developing ways to make these blocks more accessible. “These blocks can be intimidating because people may not be comfortable with the skills and may not be familiar with the anatomy,” Dr. Lin said.

“Our goal is to find a technique that orthopedic and emergency physicians, including trainees, can learn to administer safely, so that the patient is not waiting until the next morning for a regional anesthesia specialist.”

Dr. Lin and her regional chief, Kapil Anand, MD, have been exploring using simpler methods, such as the suprainguinal fascia iliaca block (Figure). 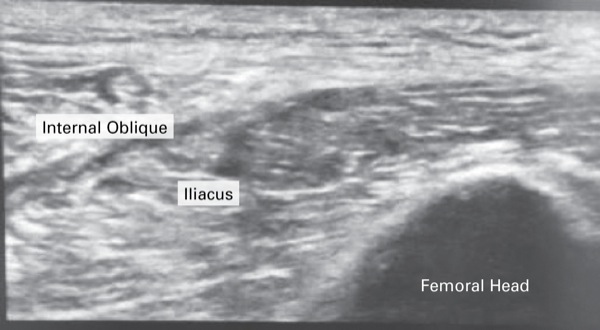 Figure. In the suprainguinal fascia iliaca block, local anesthetic is injected into the plane between the internal oblique and iliacus muscles.