Anesthesia-induced loss of consciousness is accompanied by microscale changes in neural signaling patterns, according to a recent study. The results highlight the role of local network dynamics in managing conscious states.

Current theory suggests that a key prerequisite for consciousness is the brain’s ability to select one set of sensory input while rejecting alternatives. Research supporting this theory has identified a collection of “resting states”—patterns of cortical activity that may represent these discriminable sets of sensory inputs.

According to this framework, changes in the brain’s ability to discriminate between these resting states should disrupt consciousness. A group of studies has established the popular notion that mLOC causes a breakdown in macroscale signaling (between brain regions) without altering the dynamics of microscale signaling (between neurons). In support of this, recent functional MRI (fMRI) studies indicate that mLOC disrupts signaling between brain regions.

However, a team of researchers in the laboratory of Rafael Yuste, MD, PhD, at Columbia University in New York City, hypothesized that the observed breakdown in brain activity is rooted in microscale signaling changes. The team used high-resolution microscopy techniques to obtain detailed insight into neuron-level signaling during mLOC. The results of their inquiry were recently published in Cell Systems (2019;8[5]:467-474.e4).

“Microscale cortical dynamics are crucial for cognitive action,” said Michael Wenzel, MD, lead author, who was an associate research scientist in the Department of Biological Sciences at Columbia at the time of the study. “However, nobody had investigated true microscale dynamics during mLOC at the level of local groups of neurons. … So, we decided to get to the bottom of it and find out whether this popular notion was, in fact, true or not.” Dr. Wenzel and his colleagues set out to determine whether microscale dynamics remained unaltered during mLOC.

Signaling at the Neuron Level

Dr. Wenzel and his team used in vivo two-photon calcium imaging to observe cortical activity in awake and anesthetized mice. This cellular-resolution approach was what set this new study apart from previous research.

“Most studies on this topic had been carried out using fMRI or EEGs [electroencephalograms], and some of them used microarrays,” Dr. Wenzel said. “While fMRI and EEG are powerful techniques to study brainwide activity and can be applied in humans, their spatial resolution is poor as compared to the real-life density of neural networks. … Two-photon microscopy allows functional imaging at a resolution of single synapses (ca. 1 mcm) in the living brain, which makes it a powerful tool to investigate local activity dynamics of densely packed neural ensembles during mLOC.”

The authors imaged the brains of the mice before, during and after treatment with inhaled isoflurane, then searched for patterns in microcircuit activity (microstates). Results of each analysis supported the existence of a set of nonrandom microstates that decreased in number in relation to the depth of anesthesia (Figure 1). Thus, mLOC was associated with a smaller number of discriminable activity patterns, potentially revealing the mechanistic basis of mLOC-associated signaling breakdown at the macro level.

“We were very excited about this result,” Dr. Wenzel said, “as it was fundamental in establishing the hypothesis that macroscale connectivity deficits during mLOC are likely a consequence of the breakdown of local ensemble dynamics.” The hypothesis factually turned the popular idea that the macroscale breaks down and the microscale remains intact yet isolated, upside down.

Single neurons are thought to function in coactive groups called ensembles, which form the building blocks of cognitive function. In addition to a reduced number of discriminable microstates during mLOC, the authors reported a trend toward single-neuron activity and away from ensemble coactivity.

Dr. Wenzel said this result was surprising. “Basic thinking in anesthesiology is that neurons are more synchronized during medically induced coma,” he explained. “While our data does not discredit this thinking, which is based on macroscale recordings, it shows that at the very local anatomical scale, coactivity patterns in fact disappear. If one believes in local neural ensembles being functional building blocks of cognition—as opposed to single neurons—it becomes clear that cognitive function must break down if local ensembles reversibly disappear during mLOC.”

To determine whether the same changes occur during mLOC in humans, Dr. Wenzel and his colleagues used microelectrode arrays to measure propofol-induced activity changes in two human subjects. These measurements showed results similar to the mouse experiments, revealing a decrease in discriminable microstates and neural coactivity that correlated with anesthetic depth (Figure 2). 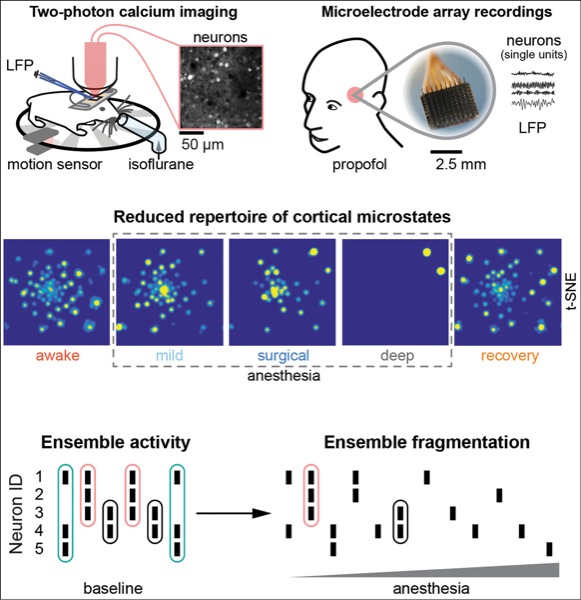 “An intuitive next step will be to recapitulate a larger number of different anesthetic conditions in a larger number of human patients, comprising wakefulness, different sleep stages, etc., to assemble a more complete picture of what’s going on within local neural networks of the human brain during alterations of consciousness,” Dr. Wenzel said.

Anesthesia of the Future

The fundamental mechanisms underlying consciousness remain a mystery. With greater understanding of consciousness and the signaling processes that support it could come the development of new types of anesthetics.

Dr. Wenzel suggested one line of research: “One could think, for example, of anesthetics that produce unconsciousness not by exerting their effect on the entire brain at once, but only specific cell types, reducing side effects while maintaining therapeutic efficacy.”