A 28 year G3P2 carrying twins vertex vertex, presents the day before induction for consultation with anesthesia.  She states that she was diagnosed with thrombocytopenia by MFM, and started on 10 mg of prednisone for a platelet count of 71K.  She has had two prior deliveries without epidural analgesia.  She plans on vaginal delivery this pregnancy without epidural analgesia.

In a recent study published in the NEJM,  2,804 women were followed with twin pregnancy.  Those who planned for vaginal birth ended up getting a c-section 44% of the time. This study looked at mortality and morbidity in women and fetuses who had planned c-section v. planned vaginal delivery. There was no difference between groups in terms of outcome.  The study did exclude any patients whose twin A was in the breech position, in which case, those patients were delivered by c-section. Another study did show that a major risk factor for unplanned c-section in twin pregnancy is nulliparity and breech twin B. 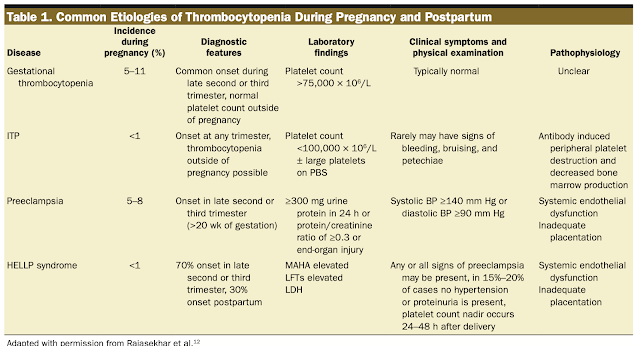 Unfortunately, given the low number of parturients presenting with thrombocytopenia who need neuraxial anesthesia, we do not have good numbers to determine the absolute risk (probability) of any one patient developing an epidural hematoma.  It should be noted, that thrombocytopenia refers simply to how many platelets are available, but tells us nothing of platelet function which may be normal, reduced or even increased.  Indeed, in pre eclampsia, platelet function is often impaired.  However, in general we know that the risk of epidural hematoma with neuraxial anesthesia is about 1:250,000 in all comers.  In a meta analysis reviewing 7509 neuraxial procedures, most epidural hematomas occurred in patients with platelet counts < 50,000 x 10^6/L. Of women with platelet counts < 100,000 x 10^6/L there were a total of 33 epidural hematomas, and 5 of these occurred in women with platelet counts between 44,000 and 91,000. However, ALL five of these had other ongoing issues [1 with AVM, 1 was coagulopathic on top of the low platelet count, 2 had HELLP syndrome, and 1 had full blown eclampsia).

In another study, 1524 patients received neuraxial anesthesia with no epidural hematomas noted. The authors, however, estimated the upper limits of the 95% CI for the risk of spinal epidural hematoma stratified by platelet count.

Unfortunately, it is not clear exactly how to use this information in clinical practice except to say that it appears risk is relatively low when platelets are above 70K.

Thromboelastography (TEG) or rotational thromboelastometry (ROTEM) have been studied as it relates to neuraxial anesthesia with thrombocytopenia. These studies were able to show no spinal epidural hematomas in patients with thrombocytopenia AND normal parameters on the TEG or ROTEM. However, other studies in oncologic patients with thrombocytopenia have reported no correlation between TEG and ROTEM parameters and clinical bleeding unless platelet levels were below 50,000 x 10^6/L.
The platelet function analyzer (PFA)-100 test platelet function. Time to platelet plug formation is measured and labeled closure time (CT). An abnormal CT may be found in patients with counts <100,000 x 10^6/L, anemia, or significant qualitative platelet defects. However, at the end of the day, the consensus statement from the Society for Obstetric Anesthesia and Perinatology Interdisciplinary Consensus statement on Neuraxial Procedures in Obstetric Patients with thrombocytopenia can not recommend any of the above tests to determine the safety of neuraxial anesthesia.
Platelet transfusion:
A 1 unit apheresis transfusion is expected to raise the platelet count between 30,000 to 50,000 x 10^6/L, although the end result is often variable depending on the disease in question.  In particular, in HELLP or pre eclampsia, the end result may be much less than what was expected after transfusion.   In ITP, transfusion of platelets alone is likely ineffective and requires concomitant treatment with IVIG and/or corticosteroid therapy. It should be noted that platelet transfusions in platelet consumption disease such as ITP is short lived.
It is currently recommended [1] that the anesthesiologist confronting a parturient with thrombocytopenia should determine whether the patient has a known etiology for the thrombocytopenia.  In addition, it is critical to determine if there is a history of easy or prolonged bleeding with the thrombocytopenia.  In particular, the clinician should be confident that the etiology of the thrombocytopenia is not related to DIC or other highly morbid and evolving conditions.  If it is suspected or confirmed that this is a case of gestational, autoimmune (idiopathic) thrombocytopenia or related to confirmed diagnosis of hypertensive disorder of pregnancy, then verifying that a recent platelet count is above 70,000 x 10^6/L would allow the clinician to have a rather high confidence that neuraxial anesthesia is safe.  With a platelet count between 50K and 70K, a more careful cost benefit analysis should be carried out.  If the platelet count if less than 50K, the guidelines recommend avoiding neuraxial anesthesia.
The SOAP guidelines can be summarized in this algorithm which I found very helpful. 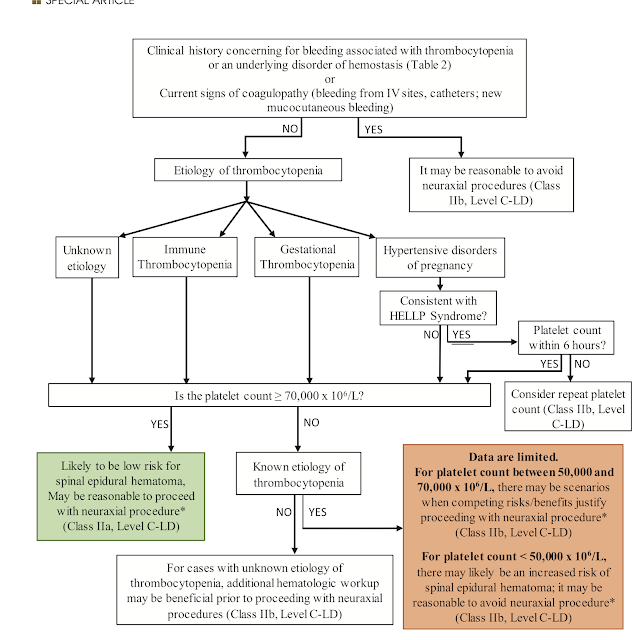