In anesthesiology, these precepts should be kept firmly in mind in our attempts to improve “quality.” Anyone who speaks out against measures that are taken under the banner of improving “quality of care” or “patient safety” risks coming across as reckless, heartless, or both. Yet the pursuit of “quality” in health care has a track record of implementing changes and policies that haven’t been subjected to any rigorous scientific study, in effect “prioritizing action over evidence” (N Engl J Med 2007;357:608-13).

In anesthesiology, we love our gadgets. We especially like gadgets that generate numerical values we can track. It’s no wonder that quantitative nerve stimulators measuring thumb movement via acceleromyography are gaining in popularity. They give us a ratio of neuromuscular recovery that we can document and trumpet as evidence of high-quality care, blessed by the Anesthesia Patient Safety Foundation (APSF) in its most recent recommendations for patient monitoring (APSF Newsletter 2022;37:7).

A recent review article in Anesthesiology concluded that “the use of quantitative monitoring may reduce the risk of hypoxemic events and episodes of airway obstruction in the PACU, decrease the need for postoperative reintubation, and attenuate the incidence of postoperative pulmonary complications” (Anesthesiology 2022;136:345-61).

Note the use of hedging verbs such as “may” and “attenuate.” The authors, Drs. Murphy and Brull, are not claiming that the use of quantitative nerve stimulators should be considered an absolute standard of care or a guarantee of improved outcomes. That’s because they are scientists and understand the hazards of confusing association with causation.

From the trenches of clinical care, is quantitative monitoring turning out to be an unmixed blessing? Hardly, especially if your clinical practice involves trainees. The problem isn’t the technology. The problem is with failure to understand the limits of the technology and the consequences that arise from uncritical interpretation of the data that the monitor generates.

The electronic health record now badgers us to document quantitative neuromuscular monitoring, regardless of whether the arms are tucked or tightly secured. If the thumb can’t move, the monitor won’t be reliable. A resident may assume the patient is adequately relaxed even if it isn’t true, failing to appreciate subtle signs of return of neuromuscular function such as an increase in peak inspiratory pressure or a change in the end-tidal CO2 waveform. This works until the patient actively bucks on the tube. Our surgical colleagues may be justifiably irritated if they have already remarked on inadequate relaxation only to be told that the patient has no twitches and therefore must be paralyzed.

Conversely, when the monitor demonstrates barely one twitch, the resident may decide to give more muscle relaxant when it isn’t clinically necessary or even appropriate. This in turn may lead to the patient’s being profoundly paralyzed at the end of the case. If the patient received a drug that can be reversed with sugammadex, there may be no problem. However, on one recent morning I took over from the night call team the care of a patient who required a full gram – 1,000 mg – of sugammadex to reach full recovery. What was the need to give 100 mg of rocuronium during a renal transplant?

What we’re seeing here are unintended consequences and a steep slide toward mediocrity in the management of muscle relaxation. In the interest of avoiding a citation from the quality-improvement committee for inadequate reversal, residents are steered away from using cisatracurium, even in cases of complete renal failure, and are getting little experience in the use of neostigmine.

If a patient moves or attempts to breathe over the ventilator, the solution is more rocuronium – not appropriate deepening of anesthesia, improvement of ventilatory parameters, or correction of acid-base status. As TIVA – total intravenous anesthesia – increases in popularity (for reasons unclear to me), the dependence on profound muscle relaxation increases proportionately. 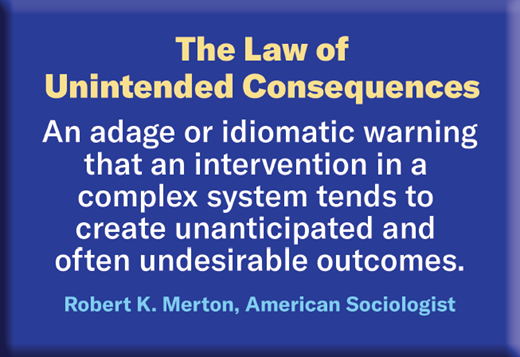 What will happen one day if we have a shortage of rocuronium or sugammadex? Our PACUs will be full of patients on ventilators. In today’s era of supply chain misadventures, drug shortages are not a merely theoretical concern (asamonitor.pub/3KZSCz0).

It’s a good thing – isn’t it? – that errors are now considered system problems, not individual failings. The idea is that we shouldn’t hesitate to report adverse events as these will be reviewed with an eye to correcting system problems, not accusing people. (I’m not so sure that argument is watertight now that a nurse has been convicted of negligent homicide for a medication error.)

Yet there is no question that behavior alters when it is observed and reported on (often referred to as the “Hawthorne effect,” so named after Western Electric’s Hawthorne manufacturing plant where pioneering productivity studies were done in the 1920s) (asamonitor.pub/3Pb3Yn4). If the consequences of behavior must be reported, then the behavior will never be quite the same as it might have been without oversight.

Let’s take the example of esophageal intubation. If unrecognized it may be catastrophic, but when immediately recognized we used to think of it as something that simply happened from time to time, especially when working with trainees. Even in the hands of an experienced anesthesiologist, an occasional esophageal intubation can happen if the view during laryngoscopy isn’t ideal or the tube bumps against the arytenoid cartilages. Pull out the tube and reintubate – no harm, no foul.

In my own practice, I’ve noticed that I’ve become less likely to put in central lines than I was even 10 years ago. It has become such a time-consuming production. The potential need to report even a minor or insignificant complication seems like more aggravation than it’s worth. Is this a change that’s in patients’ best interest? Maybe, in the sense that I can get some comparable information, maybe even better information, from a minimally invasive monitoring system like the FloTrac®. But it isn’t a change that was made intentionally, after thoughtful study. It’s a behavioral change due to external forces, not an improvement to point to with pride.

Our fault or not?

Anyone who has worked with me or has read articles I’ve written on deep extubation knows that I’m a proponent of extubating deep whenever it’s appropriate, which in my hands is often (Cureus 2020;12:e8196). If I didn’t intubate the patient awake or use a rapid-sequence induction due to aspiration risk, there must be a compelling reason for me not to do a deep extubation. Residents are eager to learn how to use this technique safely, and they have often asked me why it isn’t used more frequently, at least by Americans.

Though I can’t speak for other anesthesiologists, I suspect that the rationale for awake extubation may come down to fear of criticism and blame more than any scientific evidence of improved quality or safety.

Potential sequelae of deep extubation are clearly anesthesia-related events that would be ours to own and to manage:

Potential sequelae of tumultuous awake extubation, on the other hand, aren’t viewed as direct anesthesia complications, though they may be precipitated by anesthesia (mis)management:

All of these have happened to my personal knowledge and weren’t considered anesthesia-related adverse events. It is only human nature to avoid blame and take the path of least resistance, which too often is poorly controlled awake extubation.

The quest for quality

The quest to improve quality is a worthy one. Anesthesiology has an enviable record of safety and of continuous improvement due to the efforts of so many anesthesiologists over many years. But we should never lose sight of the potential for unintended consequences, as explained in the classic New England Journal of Medicine article by Auerbach and colleagues, “The Tension between Needing to Improve Care and Knowing How to Do It” (N Engl J Med 2007;357:608-13).

Another excellent read is Greenhalgh’s analysis in the British Journal of Medicine, “Evidence based medicine: a movement in crisis?” She and her colleagues point out that inflexible rules and technology-driven prompts may produce care that is management-driven rather than in the best interests of the patient, and that evidence-based guidelines often map poorly to complex multimorbidity (BMJ 2014;348:g3725). Jureidini and McHenry go even further in their very recent 2022 BMJ editorial, “The illusion of evidence based medicine,” stating that “evidence based medicine has been corrupted by corporate interests, failed regulation, and commercialisation of academia” (BMJ 2022;376:o702).

Too often, the reporting of one or two complications, even if minor, is considered “evidence” that warrants a new policy or protocol as a recipe to prevent reoccurrence. But every misjudgment should not be treated as a critical error requiring systemic intervention.

Especially in large academic institutions, we should beware of the mindset that “the way we do it” is “the standard of care.” This leads only to mindless conformity and to tolerance of mediocrity if it is consistent with compliance. Isn’t it obvious that this attitude is contributing to physicians’ feelings of futility and burnout in their clinical work?

The patient in front of us deserves to have our best judgment and experience brought to bear in making clinical decisions, regardless of any pathway, protocol, or local custom. Isn’t that the care we would want for ourselves?