Although capnography remains the gold standard for monitoring ventilation in patients undergoing general anesthesia and monitored anesthesia care (MAC), the technology is more challenging in nonintubated patients. In these situations, a noninvasive respiratory volume monitor may be helpful. One such monitor has been found to provide reliable measurements when capnography data are unavailable, and seems unaffected by end-tidal carbon dioxide (CO2) challenges such as nasal cannula placement, dilution with oxygen and mouth breathing.

“In patients who are not ventilated and have a nasal cannula or a face mask, capnography is not always accurate,” said Sujatha Pentakota, MD, an instructor in anesthesia at Brigham and Women’s Hospital, in Boston. “In those situations, we often rely on pulse oximetry, which is a very late indicator of respiratory depression, or subjective assessment. Given the shortcomings of pulse oximetry in these situations, we wanted to compare capnography with a newly developed respiratory volume monitor in these situations in patients receiving propofol-based sedation.”

The monitor—ExSpiron (Respiratory Motion Inc.)—provides continuous monitoring of minute ventilation, tidal volume and respiratory rate. The monitor has a sensor that goes across the patient’s chest. 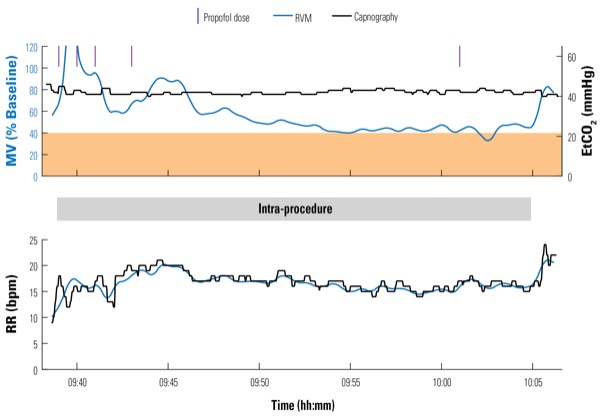 Thirty-two patients (19 women; mean age, 49.4±16.4 years; body mass index, 26.1±6.3 kg/m2) were enrolled in this observational study; all were undergoing colonoscopy. The respiratory volume monitor and capnograph recorded simultaneous data. All patients underwent propofol-based MAC according to the institution’s standard of care, with variable use of midazolam and fentanyl. Baseline minute ventilation, tidal volume and end-tidal CO2 were determined during normal breathing before sedation.

These results, the researchers said, demonstrate that the respiratory volume monitor provides reliable measurements when capnography data are unavailable. What’s more, the novel device is not subject to capnography’s limitations of nasal cannula placement, oxygen displacement and mouth breathing. “So we think this would be a very good way to monitor patients who are getting opioids but don’t have an intubated airway,” Dr. Pentakota said.

“In sum, we believe the respiratory volume monitor provides useful data that is similar to that provided by capnography, but has certain advantages that may make it a useful alternative to capnography.”

Session co-moderator J. Ross Renew, MD, an assistant professor of anesthesiology at Mayo Clinic in Jacksonville, Fla., asked about the monitor’s widespread applicability. “I’ve used this monitor before,” Dr. Renew said. “Are there specific patient populations in which it doesn’t necessarily work as well?”

“It can be difficult to place the sensor accurately in obese patients, especially obese women with large breasts and men with very hairy chests,” Dr. Pentakota said. “But I’ve found that in these cases the sensor can be placed both laterally and posteriorly. This helps quite a bit.”