A large analysis of rates of postdural puncture headache (PDPH) following labor analgesia/anesthesia in the United States closely replicates findings from previous smaller studies. The analysis also revealed that conservative treatment strategies were common among these women, with much lower rates of repeat epidural blood patch and follow-up care for PDPH than has been described.

“Depending on geographic location, between 70% and 80% of women get labor epidural analgesia or neuraxial anesthesia for cesarean delivery,” said Carlos Delgado, MD, an assistant professor of anesthesiology and pain medicine at the University of Washington, in Seattle. “And if there’s accidental dural puncture, the rate of PDPH is as high as 50%.

“The most beneficial intervention for PDPH is an epidural blood patch,” he added. “It can be quite successful, but depending on where you practice, patients may require a second blood patch as much as 17% of the time.”

So far, most of the data on PDPH and epidural blood patches comes from single-institution studies and academic centers. Since neither of these sources may accurately reflect real-world national practices, the investigators turned to the Truven MarketScan Commercial Claims and Encounters database, which contains data from de-identified inpatient and outpatient health insurance claims.

“This database is interesting because it offers quite a bit of coding and cost data,” Dr. Delgado said. “Nevertheless, it isn’t a clinical database, which is one of the limitations of this analysis. So we are relying on people to adequately code PDPH, as well as the epidural blood patch and the day it happened.”

The researchers used Current Procedural Terminology codes to identify vaginal deliveries, cesarean deliveries and epidural blood patch procedures occurring between Jan. 1, 2008, and Sept. 30, 2015. A variety of outcomes were analyzed, including: 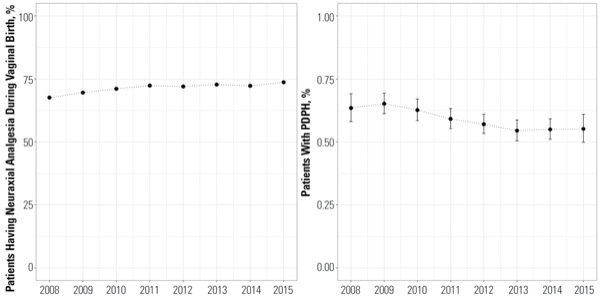 “Interestingly, we saw that there was an increase in the use of neuraxial anesthesia over time,” he said. “This is not particularly surprising, because we’ve been seeing that in the rest of the literature as well.” 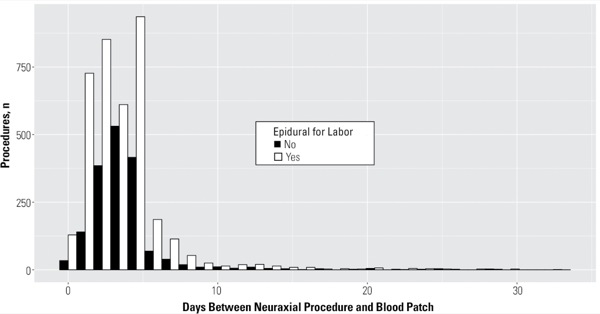 “The interesting thing we found here was that only 6.6% of patients required a second blood patch, which is quite a bit lower than what’s been previously reported in the literature, which ranged between 10% and 20%,” Dr. Delgado said. Follow-up care for PDPH was documented in 10.6% of patients after their initial epidural blood patch. “This included outpatient visits or exams related to PDPH, or a second epidural blood patch.”

“We found it quite interesting that 60% of women with PDPH required a blood patch, but 40% required just conservative care. Interestingly enough, we saw a decreased incidence of repeat blood patches compared to the literature, which likely represents academic practices or are linked to efficacy.”

“I’m curious about the Truven MarketScan,” commented session moderator Elizabeth M. Lange, MD, an assistant professor of anesthesiology at Northwestern University’s Feinberg School of Medicine in Chicago. “Does it include both academic insured payors and private community hospitals?”

“Yes,” Dr. Delgado replied. “As long as the patient is privately insured, the database doesn’t discriminate between those two.”

“The limiting factor of this database is that it’s just an administrative database,” Dr. Delgado replied. “So there’s a lot of clinical questions that it can’t answer.”

“In my practice, we have started to notice a higher incidence of delayed presentation of PDPH, with patients and their providers contacting the anesthesia service around postpartum day 10,” Dr. Lange commented. “In these instances, if the symptoms are not consistent with PDPH, we have a low threshold for imaging.”