Letter to the editor regarding how multiple brands of rapid infusers will continue to infuse at the same rapid rate when unplugged, but unheated. We recommend the introduction of safety mechanisms to prevent dangerous amounts of cold fluid from being infused inadvertently. 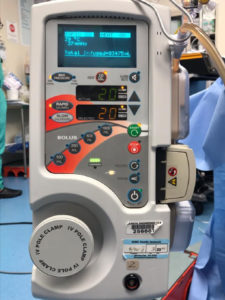 The ThermaCor® 1200 Rapid Infusion (Smisson-Cartledge Biomedical, Macon, GA) is a rapid heated fluid infuser, which utilizes dry, conduction temperature-controlled heating when plugged into an AC input voltage source.¹ When unplugged, the device makes a single beep, and the lit indicator on the infusion system that states “HEAT ON” is replaced by a flashing “HEAT OFF” message (figures 1 and 2). The nominal fluid outlet temperature with the heater on is 37°C when running at 1000mL/min. However, when the infuser is unplugged from an AC power source, the heater also turns off.¹ Despite the heater turning off, the device will continue to infuse at the same rapid rate using a lithium-ion battery pack.¹ Similarly, the Belmont® Rapid Infuser, FMS2000 (Belmont Instrument Corporation, Billerica, MA) will continue infusing up to 50mL/min without heat when unplugged.²

We experienced an incident during a trauma surgery, which required rapid transfusion of fluids and blood products, where the ThermaCor® 1200 was inadvertently unplugged. In the middle of this high acuity surgery, the beep to indicate that the infuser was unplugged was too quiet to be noticed by the anesthesiology team. This incident occurred at the height of the COVID pandemic and the patient’s SARS-CoV-2 status was unknown at the time of arrival to the operating room (OR). The OR policies to reduce viral transmission were followed throughout the case, including donning surgical hoods and face shields that might have impeded the providers’ ability to visualize the “HEAT OFF” signal. 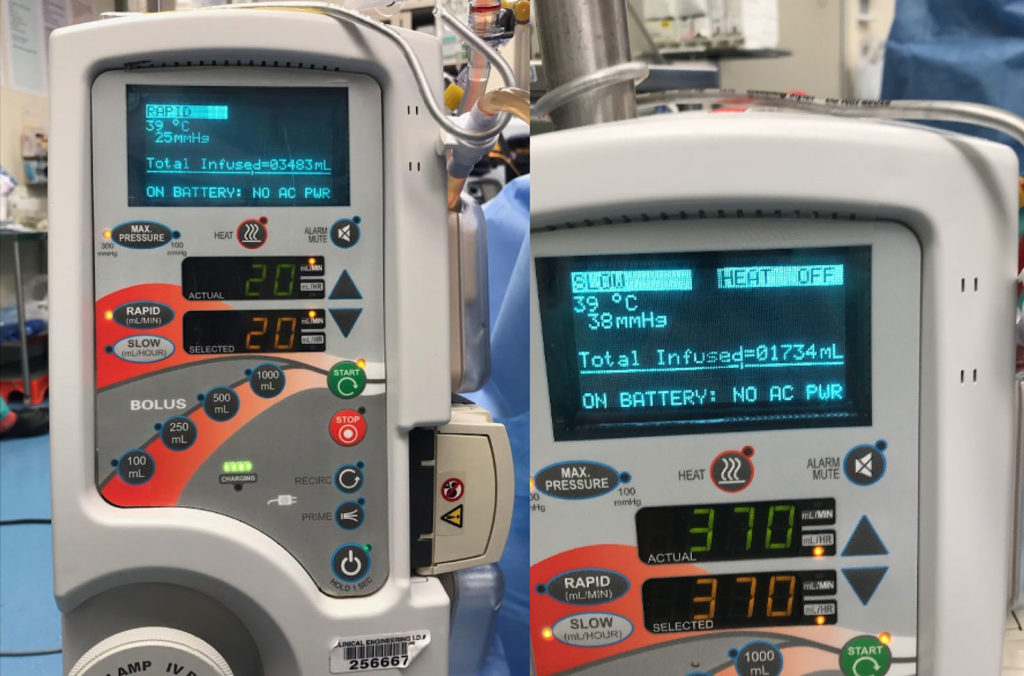 Figure 2: After the rapid infuser is unplugged, the display screen no longer states “HEAT ON” and instead clarifies “ON BATTERY: NO AC PWR,” and flashes “HEAT OFF.” (Note: Photos obtained after the actual clinical event.)

As a result of the unnoticed “HEAT OFF” alert, a large volume of unheated blood was transfused into the patient. The patient developed sinus bradycardia which progressed to cardiac arrest. Osborn waves were apparent upon review of the EKG. Heated rapid infusers are used to prevent the known risks of acute hypothermia such as coagulopathy and cardiac arrhythmias.³ Fortunately, the patient was resuscitated and survived. Given this event we believe there should be protective measures in place to prevent rapid infusion of cold fluids. While there may be clinical scenarios where an unplugged rapid infuser is required, such as during emergency transport of a patient, there should be a requirement for acknowledgment of the unplugging by the provider. It is not uncommon while resuscitating a patient to not look at the screen of a rapid infuser for several minutes or enough time for the patient to receive a significant volume of cold fluid. Therefore, the flashing “HEAT OFF” indication may not be a useful notification. To prevent future similar adverse events, we would recommend a louder, more persistent beeping to alert the provider that the infuser has been unplugged, as well as an acknowledgment screen that prompts the provider to respond to the unplugged device prior to continuation. Education of the end user would also help to prevent a similar outcome.

The authors have no conflicts of interest.

While Smisson-Cartledge Biomedical (SCB) understands the potential issue raised in the letter, please know that the ThermaCor® 1200 Rapid Thermal Infuser was designed with patient safety as the highest priority, and we are very pleased to hear that there was no permanent injury to the patient. While not preferable that unwarmed fluids were delivered, if no fluids had been delivered the outcome might have been worse. In the scenario presented, there are four items to consider: 1) the unit inadvertently became unplugged, 2) the heating was turned off after it was inadvertently unplugged, 3) the user notification and alarm regarding heat and AC Power properly activated after the unit became unplugged and 4) the training and experience of the operator. 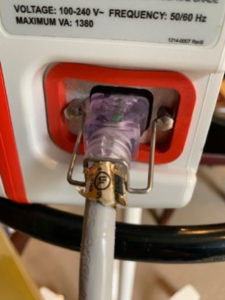 Figure 1: Depicts a three-prong grounded plug held in place by a safety latch to prevent the accidental unplugging of the power cord.

It would certainly be SCB’s preference that all capabilities—including heating—be available while the unit is on battery power, and we continue to make development efforts in this regard. However, the current limitations in battery technology will not permit any rapid infuser to both infuse and heat while on battery power. Therefore, the ThermaCor® 1200 Rapid Infuser, like all rapid infusers on the market, prioritizes functions while on battery power. The design challenge becomes whether to stop the device at the loss of AC Power or continue to infuse life-saving blood or fluids without heat. After much input from the user community (e.g., emergency medicine physicians, surgeons, anesthesia professionals, nurses, etc.), it was highly recommended to continue infusing because stopping blood or fluid delivery to a critically ill patient was deemed unacceptable and, in many cases, could result in immediate patient injury or death. As a result, SCB designed the ThermaCor® Rapid Infuser to have full infusion capabilities including discrete bolus delivery even when running on battery backup while notifying the user that AC power is no longer available and heating has stopped. We continue to search for solutions that would make the heating function available as well. It should also be noted that, even when the ThermaCor® Rapid Infuser switches to battery and active heating is disabled, blood or fluids passing through the device continue to be “passively warmed” for a period of time. That is, the heat exchanger continues to retain significant heat and transfers it to the blood and fluids coming in contact with it, so there is not an abrupt change to infusing cold fluids.

This brings us to the third point. How should the device properly notify the user when the AC power is disconnected? The ThermaCor® 1200 Infuser accomplishes this in multiple ways. First, the device has a single audible alarm that sounds the instant the device becomes unplugged or AC Power fails. In the early design, consideration was given to having a continuous alarm, but since the device could be on battery for two hours or more, having a device continuously alarming was deemed unacceptable and distracting to clinicians. In addition, there are concerns expressed by the health care industry about “alarm fatigue” and a push to have fewer “distractions” in the operating room. 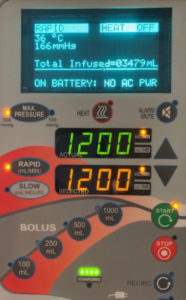 Figure 2: Shows the rapid infuser’s display on the battery supply. See bottom display line “ON BATTERY: NO AC PWR”. Also, notice that in the top right hand corner, it states “HEAT OFF” that continuously flashes on/off.

Beyond the instant audible alarm, on the Information Display (figure 2) in the top right, text which normally displays “HEAT ON,” immediately changes to “HEAT OFF” with loss of AC Power, and continuously flashes on and off at more than one time per second to catch the user’s attention. Next, on the Information Display, on the bottom line where only Alarm Information is displayed, in all capital letters is “ON BATTERY: NO AC PWR,” informing the user of the changed state of the device. SCB developed this “plain text” format to make it as easy as possible for the user to understand the power status of the unit and alarms, instead of codes utilized by other rapid infusers. In addition, the LED, located next to the Heat button at the top center of the panel, turns off, signifying that heat is off, and an LED in the Power Cord Icon, located on the bottom of the panel, turns off, further signifying that there is no AC Power. As always, the temperature of the outflow fluid is displayed on the top left of the display. Once AC Power is restored, a single audible alarm sounds and the heat automatically turns back on and all displays will return to normal.

Finally, and probably most importantly, all facilities utilizing the ThermaCor® Rapid Thermal Infuser receive intensive training on the use of the device, with specific emphasis on the device’s capabilities while on battery power. When an operator is infusing fluids at high flow rates, it is always important to monitor the device to ensure that it is programmed and functioning as expected. All the points that we have stated above are reviewed and emphasized during our training and should be reviewed and reinforced with any new user. Understanding the operation, capabilities, and limitations of any technology that is critical to a patient’s health and safety is vitally important.