Berend Mets, MB ChB, PhD, a professor and the chair of Anesthesiology and Perioperative Medicine at Penn State University College of Medicine, in Hershey, recently published “Waking Up Safer? An Anesthesiologist’s Record,” which is available through SilverWood Books, Bristol, England, and on Amazon.

Written specifically to inform the lay public about anesthesia, this “anesthesiologist’s record” tells the story of the specialty. Drawing on personal experience while tracing historical and scientific developments—such as the first anesthetic, in 1846—Dr. Mets chronicles the stories of innumerable notable individuals, such as Drs. William Morton, Virginia Apgar and Christiaan Barnard from the past, and Drs. Archie Brain, Atul Gawande and Mehmet Oz from the present—all while illustrating the practice of anesthesiology along the way.

Case History (ca. 1987) Illustrating the Ever-Present Fire Hazards of an OR

On call at night as a locum registrar in England, I was informed that emergency surgery for a ruptured abdominal aortic aneurysm had been scheduled. When a patient suffers such a ruptured aneurysm, with the excessive blood loss this entails, surgery can rarely save the day. A week earlier, surprisingly, I encountered a similar patient, not quite as sick, and on calling my consultant—safely at home—I was told, “Get on with it,” so I did. With good results, I must add. 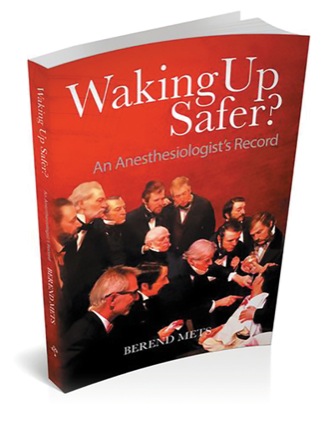 Today, suspecting the same response, I got on with it, summoning the senior house officer to help with this all-too-difficult case, and having everything ready by the time the patient was emergently transferred to the operating theatre, at around 2 am in the morning. Placing an arterial line quickly, we sent off an arterial blood gas analysis sample to the laboratory, fearing extreme acidosis of the blood, indicating that this patient was indeed terminal.

We planned to induce anesthesia, the surgeon standing poised over the patient, ready to make a quick incision to get into the abdomen as rapidly as possible. Placing a lifesaving aortic clamp, deftly, around the aorta would stop further bleeding. As is often the case in such patients, the abdomen is full of blood and tense and distended, and this tamponades (compresses) the aorta. Although burst, this stems somewhat the blood leaking from the ruptured aneurysm. We induced, he incised, releasing the tamponade, and the bleeding from the ruptured aorta recurred unabated—the patient’s blood pressure crashing as the surgeon struggled to see, and clamp, the aorta through the torrent of blood. Administering copious quantities of blood and fluids, we kept the patient alive, against all odds, while the surgeon completed the complex procedure.

Extreme acidosis was indeed present, as we had feared, and was getting worse as the surgeon closed the abdomen, ending the case. Planning to transfer the patient to the intensive care unit for further monitoring, we were told that a bed was not ready. The surgeon suggested that we transfer the patient to the recovery room instead. This was not a good idea as our patient was becoming increasingly unstable as the acidosis continued to progress—so I said so—and not a minute too soon. Looking up at the EKG monitor, I saw the start of a few irregular heartbeats, then runs, and then ventricular fibrillation. The saw-tooth pattern was readily apparent on the green electronic EKG trace, heralding completely chaotic heart action and cardiac arrest.

The treatment: defibrillation, using two highly charged electronic paddles placed over the heart. One on the patient’s sternum and the other over the rib cage on the left, making quite sure that the two do not touch for fear of the 1,000-volt charge sparking between the paddles. I applied electrode gel to the chest quickly, covering the areas where I would place the paddles, and asked the nurse to press the charge button on the defibrillator. Placing the paddles, I asked everybody to stand back—fearing electrocution of bystanders—as I discharged the paddle electrodes on the patient’s chest: 200 joules of electric energy released to re-stabilize the cardiac rhythm. Stand back! Discharge! The patient heaved slightly from the discharged shock. Looking up at the monitor, the EKG showed a straight line and then a few disorganized beats.

Giving some IV epinephrine, we tried again. I placed the paddles again over the gel on the patient’s chest: Stand back! Discharge! Another heave, to no avail; ventricular fibrillation persisted. External cardiac massage was the next step, for one or two minutes, as we readied ourselves to provide another shock. We repeated this process over and over ineffectively. Worried, I started monitoring the patient’s pupil size, looking for fixed dilated pupils—unresponsive to light—a sign of imminent brain death. Which was the situation here.

We tried once more. By now there was quite a lot of gel already on the patient’s chest, so I did not need to put on more before I applied the paddles. Stand back! Discharge! Bang! A blinding flash and an almighty explosion illuminated the scene, smoke filling the room, as 1,000 volts leaped between the paddles through the gel now smeared across the patient’s chest. With the smoke clearing, and slightly blinded by the explosive flash, I saw nurses running towards the operating theater exit doors—running to get a fire extinguisher. And someone was heard to mutter haltingly, through the smoky haze, “Now he really is dead.” And, unfortunately, he was. Despite our very best efforts to the contrary.

“Dr. Archie Brain (1942-), a dapper, always well-dressed man with a mischievous glint in his eye, never planned to go into medicine. Born in Japan to a father who was a knighted diplomat, he had a penchant for the arts, studying linguistics at Oxford before becoming fascinated by science and invention.

Upon completing medical training at St Bartholomew’s in London, he got into anesthesia quite by accident. The job he was interviewing for had been taken, so he was offered an anesthetic one instead. “I might as well have a go, why not?” After six weeks he was hooked. “I just loved it.” Becoming a lecturer in anesthetics at the London Hospital in 1980, he started work on some of his planned inventions, contriving to establish what was really missing in anesthetic practice that would make it safer.

He remarked, “All this holding of facemasks does seem to me to be a bit awkward,” at a time when he was doing a lot of dental anesthesia using a Goldman nasal cone mask. With his artistic eye he recognized a match between the triangular shape of the glottic opening of the larynx and that of the skull bones surrounding the nose, and formulated a plan to see whether the Goldman cone could cover the larynx (it covered the nose nicely, so why not the larynx?). In so doing he invented the laryngeal mask airway. Visiting London’s Institute of Laryngology, he borrowed pathological specimens, putting them in his suitcase—smelling of formalin—to carry them home on the Underground, and tested his prototypes on his kitchen table over weekends. Connecting a Goldman nose cone to a sawed-off endotracheal tube, he tried it on himself: “I coughed and spluttered a bit but I could breathe through it. It was a very exciting moment.” Then, when he had summoned up enough courage to do so, he tried the prototype on one or two patients under anesthesia, fearing that he might hurt the patients. “It was really a very exciting moment, because they just breathed happily through this. And then I tried squeezing it [the anesthetic bag] a bit, and then I found I could actually also ventilate [the patient].”

The so-invented Laryngeal Mask Airway (LMA, Teleflex) became commercially available in 1987, and it is fair to say that this airway device was to prove to be an inflection point in anesthetic safety, revolutionizing anesthetic practice. There was now an alternative to holding or attaching a mask to the patient’s face—the norm for short anesthetic cases.

The LMA is placed simply, without the need for laryngoscopy. After anesthetic induction, the patient’s mouth is opened and the soft pear-shaped device is gently pushed over the tongue and seated over the larynx—noted by the easy air exchange that occurs through its plastic connecting tube when it is in the right place. The connecting tube, similar in design to the proximal side of a conventional endotracheal tube, is attached to the anesthetic breathing system for anesthetic delivery and gas exchange.

The LMA can also serve as an easier alternative to endotracheal intubation, neither requiring laryngoscopy nor muscle paralysis to place, while causing much less cardiovascular and respiratory tract reflex responses.

An “intubating” laryngeal mask airway has also been developed, which can be used in an emergency situation when the airway cannot be easily secured using alternative means, which was also designed by Archie Brain. Archie tells me that he is now most pleased when he hears stories of how the LMA has helped save yet another patient’s life.

Excerpted from “Waking Up Safer? An Anesthesiologist’s Record” by Berend Mets. © 2018 Berend Mets. Used with permission of the publisher, SilverWood Books, Bristol, England.