Twitter is a powerful tool for ASA (@ASALifeline) and has the power to drive substantial change in our field, such as improving engagement in conferences and enhancing resident physician recruitment (Anesth Analg 2020;130:333-40; ASA Monitor 2021;85:40). It is important to analyze social media strategies to assess whether an individual or organization is providing value through their messaging. To identify topics ASA members value, who ASA’s influencers are, and areas for potential ASA audience growth, we explored whether specific tweet topics and the society’s social network structure impact tweet engagement.

How can we analyze topics from thousands of ASA tweets? In the era of big data, we often characterize data as structured or unstructured. Structured data, such as patient risk factors, demographic variables, or outcomes, drives most traditional statistics we’ve learned in our evidence-based medicine curricula and is the engine for the vast majority of ongoing studies in anesthesiology. Unstructured data includes things like speech, text, images, and videos. It doesn’t fit well into traditional statistics but often carries much richer information. This is precisely where natural language processing, a branch of artificial intelligence, showcases its power.

Using the Twitter Application Programming Interface (API) (asamonitor.pub/3NpZR5d), we downloaded all tweets sent by ASA between October 2011 and September 2021 (11,196 tweets). Queries return tweet text and features such as date and time and whether tweets include media. Then, we downloaded all tweets sent by anyone on Twitter who mentioned @ASALifeline between January 2020 and September 2021. All accounts that sent or were mentioned within these tweets were cross-referenced with the users ASA mentioned during that period.

Another key concept is influencers. There is no standard definition, and user mentions and follower count may not adequately quantify influence (JMIR Public Health Surveill 2017;3:e14). A more robust approach is to consider the position and connectivity of a user within a specific network’s structure (West J Emerg Med 2017;18:281-7). We measured connectivity through eigenvector centrality, which was the basis for the search algorithm that established Google as the premier search engine in the early 2000s. The key idea is that if your followers also have lots of followers, you have high potential to spread your message.

We used a natural language-processing technique to organize the 11,196 tweets sent by ASA into topics. The algorithm discovers abstract categories based on word similarity; it is up to the user to label the categories (a big data technique that falls into the category of “unsupervised learning”). We then labeled each tweet with its topic, allowing us to use logistic regression to explore the associations between tweet topics (using “Meetings & Workshops” as the reference topic) and high engagement after controlling for inclusion of hashtags or media, time of day, and weekday versus weekend. Finally, we identified the top 100 influencers by eigenvector centrality and compared proportions of high-engagement tweets sent to the top 100 influencers versus non-influencers.

Over the study period, total ASA followers increased from 2,500 to more than 26,000. The most frequent hashtags were #ANES__ (where __ is a placeholder for the year of the ASA annual meeting), #jobs, #ASAWLC, #ASAPM, and #anesthesiology. Hashtags with the highest average engagement rate were #MedStudentTwitter, #MedTwitter, #HealthCareHeroes, and #COVID19. 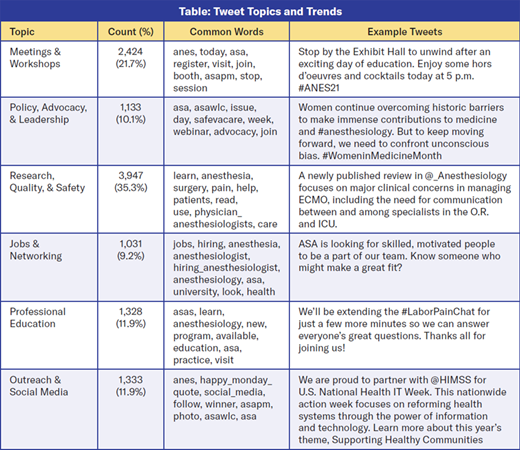 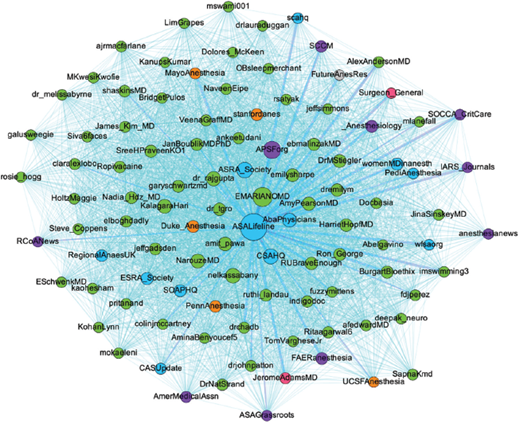 ASA mentioned 42 of these influencers: 19 (27%) of the individuals, nine (82%) of the professional societies, eight (80%) of the medical organizations, three (60%) of the anesthesiology practice groups, both political figures, and the medical student group. Seventy of the individuals were staff anesthesiologists, and one was a non-physician researcher. Tweets that mentioned influencers were more likely to have high engagement than tweets mentioning non-influencers (35.4% vs. 23.6%, p-value < 0.001). Only four of the top 100 influencers appeared in the top 100 users by follower count.

Although it isn’t surprising that certain topics drive engagement, it is important to identify these topics to help provide more value to ASA and its social media community. A previous investigation explored tweet topics at the American Society of Regional Anesthesia and Pain Medicine annual meeting using a four-category system defined a priori (Reg Anesth Pain Med 2017;42:283-8), and another surmised that tweet topics affect reach and should be explored to inform engagement strategies (Anesth Analg 2020;130:333-40). This analysis builds on that work as it discovered tweet topics with no a priori expectation and found that they are independently associated with engagement. ASA social media users engaged most with Research, Quality, & Safety; Policy, Advocacy, & Leadership; and Outreach & Social Media, suggesting that tweets on these topics add value to our community.

Social network structure plays an important role in amplifying ASA’s message. Tweets mentioning influencers were more likely to result in high engagement (35.4% vs. 23.6%, p-value <0.001), but ASA mentioned fewer than half of the top 100 influencers, including just 27% of the individuals who were influencers. ASA could bolster its mission of “Advancing the Practice and Securing the Future” by targeting more individuals. Targeting individual influencers within and beyond ASA could connect different communities and could garner widespread support in political campaigns supporting physician anesthesiologists, raising public awareness of safety and quality issues, and helping recruit diverse medical students into anesthesiology. Importantly, influencers must be selected carefully, as we found that the top ASA social media influencers frequently were not the most popular by total follower count. The most engaging hashtags (#MedStudentTwitter, #MedTwitter, #HealthCareHeroes, and #COVID19) underscore that ASA is providing value to groups outside of our field. Campaigns that target specific groups through mentions and hashtags are an area for future investigation in anesthesiology and may be a very powerful tool to mold ASA’s brand and target its messages.