Ever since the first pacemaker was implanted in 1958, the world has witnessed a consistent uptick in cardiac device therapy (Miller’s Anesthesia, 7th edition, 2009). The term cardiac implantable electronic device (CIED) refers to any permanently implantable cardiac pacemaker or any artificial implantable cardioverter-defibrillator (AICD). A pacemaker is essentially an impulse generator connected to leads that carry the electrical signals to the patient’s heart. Pacemakers are of different types: single-chamber with a single lead implanted in the right ventricle (RV); dual-chamber with two leads – RV and right atrium (RA); and biventricular with three leads: – RA, RV, and coronary sinus to pace the left ventricle. Indications for pacemakers include bradyarrhythmias, atrioventricular blocks, and sinus node dysfunction.

To understand normal pacemaker behavior, one needs to be familiar with pacemaker nomenclature or codes. The North American Pacing and Electrophysiology/British Pacing and Electrophysiology Group (NASPE/BPEG) pacemaker codes (Table) clarify how a pacemaker functions (Pacing and Clinical Electrophysiology 1987;10:794-99). The first position of this code indicates the chamber(s) being paced. The second position indicates the chamber where the electrical rhythm of the heart is being sensed. An additional designation, O, has been used when pacemaker discharge is not dependent on sensed electrical activity. The third position refers to how a pacemaker responds to a sensed signal: O represents no response to an underlying signal (asynchronous mode); I means the pacemaker output is inhibited; T refers to triggering of pacemaker output; and D indicates a dual response where the pacemaker will both trigger or inhibit in response to sensed rhythm. The fourth position serves to clarify whether an adaptive rate modulation (R) is present. The fifth position indicates whether multisite pacing or anti-tachycardia functions are active.

Temporary transvenous pacemakers are placed through the internal jugular vein with the electrode in contact with the RV myocardium, when the cause is likely reversible such as medications, toxins, cardiac trauma, myocardial infarction, and infection. Similarly, epicardial pacemaker systems use leads that are directly attached to the epicardial surface of the heart, typically for temporary pacing following cardiac surgery. Leadless systems are a self-contained implant that have the electrode as well as the pulse generator embedded in a single device that is implanted directly in the heart (Circulation 2014:129:1466-71); they only have RV pacing capabilities and are not able to deliver cardioversion or defibrillation.

Cardiac resynchronization therapy (CRT) involves synchronizing the pacing of the RV and the left ventricle (LV), which improves the hemodynamics and the ejection fraction due to remodeling. The Cardiac Resynchronization in Heart Failure (CARE-HF) trial demonstrated a 36% relative reduction in mortality in CRT patients compared to medical optimization (European Heart journal 2006; 28:1928-32). CRT is of two types: CRT-pacemaker (CRT-P) and CRT-defibrillator (CRT-D).

A pacemaker that can also treat ventricular tachyarrhythmias via defibrillation and anti-tachycardia pacing is called an AICD. The AICDs typically have pacemaker abilities; however, pacemakers do not necessarily have AICD capabilities. The AICD system is made up of three prime components – a pulse generator, pacing electrodes, and defibrillation electrodes (New Engl J Med; 2003; 349:1836-47). A subcutaneous AICD is used in younger patients with scarred vascular system, where the ICD lead is tunneled in the parasternal position and the generator is commonly placed between the latissimus dorsi and serratus anterior. It is important to note that these subcutaneous devices do not have any pacemaker function and hence are unable to deliver therapies such as overdrive pacing.

Periprocedural management of a cardiac implantable electronic device (CIED) requires critical observation and a detailed history and physical examination. In 2020, ASA published practice advisories with an intent to assist decision-making in areas of patient care (Anesthesiology 2020;132:225-52). A chest radiograph should be evaluated for the number and position of leads. A recent interrogation (typically within the last three to six months) of the CIED must be available to ensure proper functioning of the device. The physician should also determine if the patient is pacemaker-dependent by reviewing the CIED evaluation record and an electrocardiogram. If there is any risk of electromagnetic interference (EMI), the mode should be changed to asynchronous mode, using a programming machine (preferable) or application of a magnet (in emergency), especially if the surgical site will require cautery use superior to the umbilical level. If the patient has an AICD and there is risk of EMI, the defibrillation function of the AICD must be suspended by programming/magnet. Since the defibrillator has been turned off, defibrillation/pacing pads should be applied to the patients’ chests so that one can still facilitate backup pacing or external defibrillation in case of an emergency.

Procedures using electrocautery units (ECUs), lithotripsy, magnetic resonance imaging (MRI), radiofrequency ablation, or electroconvulsive therapy (ECT) all have the potential to cause EMI-related damage to the CIED. With any reprogramming of a CIED, continuous electrocardiography monitoring and pulse oximetry, as indicated by ASA standards, should be implemented and a separate defibrillator with pacing functions should be immediately available. If possible, a bipolar electrosurgery scalpel should be used. If a unipolar ECU must be used, short bursts of diathermy should be utilized, and care should be taken in positioning the grounding electrode (“bovie pad”) so that the electrical impulse is directed away from the CIED, resulting in less interference (Anesthesiology 2005;103:186-98). In a similar fashion as ECUs, reprogramming of the CIED should be performed if the radiofrequency ablation devices are being used above the umbilicus. Radiofrequency identification devices (such as scans for retained objects) can cause interference and malfunction of CIEDs and should be avoided. MRI has significant potential for causing CIED malfunction/heating. The anti-tachycardia functions should be disabled and an asynchronous pacing mode instituted if the patient is pacemaker-dependent (Journal of the American College of Cardiology 1995 25:11A). ECT requires reprogramming of pacemaker-dependent patients and those with a CIED with anti-tachycardia functions. Lithotripsy beam direction should be avoided along the path of the CIED components to avoid damage and malfunction.

Application of a magnet in an AICD disables anti-tachycardia therapies and does not alter pacemaker function, whereas in a pacemaker CIED, it changes pacing to an asynchronous mode (Anesthesia & Analgesia 2013; 117:292-94).

Asynchronous pacing modes in a patient who is not pacemaker-dependent and has a robust native rhythm may trigger the “R-on-T” phenomenon, resulting in ventricular tachyarrhythmias. Routine application of the magnet, in lieu of reprogramming, is not recommended if the time to reprogram the device would not result in harm to the patient (Anesth Analg 2013;117:292-4). Hemodynamic monitoring continues in the postoperative phase of care as well, until the CIED has been reprogrammed to baseline settings. 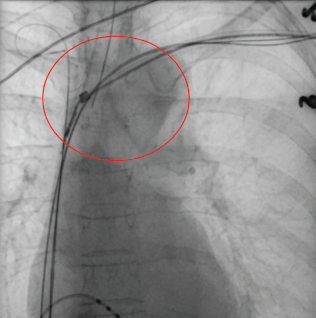 Pacemaker placement or pacemaker lead extraction, albeit simple procedures, are not without risks. When a pacemaker is being placed or extracted, the anesthesiologist must be aware of potential intraoperative complications that include bleeding (at the skin site and internal), vascular injury, hemothorax, pneumothorax, failed re-insertion and possible cardiac injury. Whatever may be the technique employed, be it general anesthesia or sedation, there can be significant attendant risks. 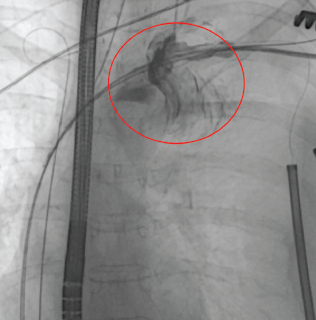 Described in the Figures above is a case wherein a lead extraction was fraught with complications that were optimally diagnosed and managed. 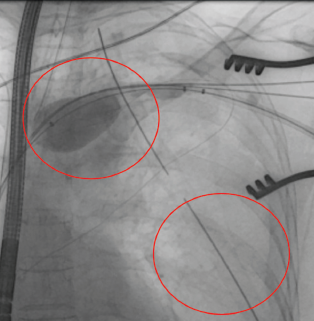 Figure 3: A compliant balloon inserted in the innominate vein stopped the bleeding. A chest tube placed next drained the hemothorax with resolution of hypotension. After deflating the compliant balloon, there was no further bleeding, and the patient did not require surgery for the laceration. Photos courtesy of Thomas Tadros, MD, and Usha Tedrow, MD, Department of Cardiology, Division of Electrophysiology, Brigham and Women’s Hospital, Boston, Massachusetts.

Even though the most common indication for CIEDs include bradyarrhythmias, recent data suggests that these will expand to noncardiac diagnosis. As we see an incline in the number of patients receiving CIEDs, the need to understand them becomes even more important. The decision-making process should involve careful consideration of factors related to the patients, the environment, and the devices so that a tailored approach to provide safe patient care can be devised.