A pilot study has found that the concentration of volatile anesthetic gas can be accurately measured transcutaneously and in real time using a novel device worn on the wrist.

Despite the device’s promising early results, the investigators recognized the need for more research, as it yielded wide variation between patients, a phenomenon they said may have been caused by environmental factors interfering with the signal emanating from the skin sensor.

“The impetus here is not to replace infrared spectroscopy, which is a very sophisticated and very expensive device,” said Ernesto A. Pretto Jr., MD, MPH, a professor of anesthesiology at the University of Miami. “Instead, the impetus is based on the fact that 5 billion people in the world—some two-thirds of humanity—do not have access to safe surgery and safe anesthesia.

“So, there have been ongoing efforts to translate technology from high-resource countries to low-resource nations,” Dr. Pretto said. “But we’re not going to get there if we use the same sophisticated and expensive model of care.” 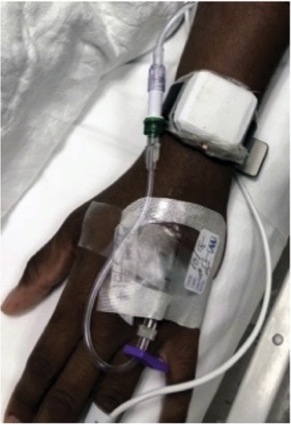 Figure. A miniaturized potentiostat, integrated with a micro-fuel cell sensor, can detect volatile anesthetic vapors emitted from a patient’s skin.

To help bridge this gap, the researchers worked with electrical and chemical engineers at Florida International University, in Miami, to develop a miniaturized potentiostat integrated with a micro-fuel cell sensor that can detect volatile anesthetic vapors being emitted from a patient’s skin (Figure). The fuel cell is contained in the wearable noninvasive platform, which measures transcutaneous isoflurane vapors.

“We designed the device for isoflurane because it’s the most commonly used volatile anesthetic in the world today,” Dr. Pretto told Anesthesiology News. “But it can be reconfigured for any volatile anesthetic.” The device detects isoflurane vapors in perspiration and insensible loss through skin, and then sends the data via Bluetooth technology to a smartphone.

To test the accuracy of the novel platform, Dr. Pretto and his colleagues enrolled 10 volunteers into the trial, each of whom had been previously scheduled for elective surgery under general anesthesia with isoflurane. Each patient was outfitted with the device preoperatively, which was subsequently removed in the PACU. The researchers collected a variety of data, including patient age, weight, height and body surface area, as well as end-tidal isoflurane concentrations from infrared spectroscopy and transdermal isoflurane concentrations from the wearable platform.

As Dr. Pretto reported at the 2019 annual meeting of the International Anesthesia Research Society (abstract E200), seven patients completed the trial. The study found a good correlation between isoflurane measurements made with the transcutaneous device and infrared spectroscopy.

However, the study also revealed wide interindividual variability, with correlation coefficients ranging from a high near 0.9 to a low near 0.2. Dr. Pretto acknowledged that more testing and fine-tuning of the device is required to determine the best anatomic location for placement during surgery.

“I think we can improve upon the correlation because there were some discrepancies between patients, and we need to find out what external factors might play a role,” Dr. Pretto explained. “What’s more, the variability we observed between patients can be due to external factors such as temperature, humidity, and whether the patient had a warming blanket on top of the sensor.”

Dr. Pretto sees a potential for widespread clinical applications, even though the development of the transcutaneous device is in very early stages. “Beyond developing countries,” he said, “the device can be used in disaster situations, in combat casualty care and wherever portability is important. It’s nice that it can be worn on the wrist, and you can’t carry around an anesthesia machine with infrared spectroscopy; it’s just not practical. Ultimately, it might even prove useful in outpatient centers and other remote hospital locations, such as an MRI unit.”

An Affordable Sensor Is Feasible

Jeff E. Mandel, MD, MS, found the concept of transcutaneous measurement of volatile anesthetic concentration interesting. “Analysis of exhaled samples assumes that an alveolar sample is available, which may not be the case during adverse events,” said Dr. Mandel, an assistant professor of anesthesiology and critical care at the University of Pennsylvania, in Philadelphia. Dr. Mandel is also the president-elect of the Society for Technology in Anesthesia.

“The sensor must have sufficient temporal resolution to be able to differentiate inspired and expired concentrations,” Dr. Mandel noted. “The gaseous samples must be dehumidified prior to analysis or the optical pathway can be obscured. All of these [requirements] make these sensors more expensive and difficult to maintain. Transcutaneous measurement eliminates these issues, making an affordable sensor feasible.

“The prospect of using such a system in physiologic closed-loop control of anesthetic agent delivery is particularly intriguing,” Dr. Mandel added.