Authors: Brian C. Davis, MD and Jasmohan S. Bajaj, MD
Anesthesiology News
Alcohol use is deeply ingrained in American culture. More adults in this country report drinking regularly than say they voted in the last election, own a pet, or attend religious services—in some cases, by significant margins. And the problem is worsening.

In the United States, more people are consuming alcohol, with the share of adults who reported drinking in the last year up from 65% in 2001-2002 to 73% in 2012-2013. The data also illustrate rising percentages of high-risk or binge drinking behavior, defined as more than four standard drinks for women, or more than five for men, on any day at least weekly. Roughly 13% of Americans met these criteria in the period 2012-2013, an increase of 30% over the previous decade. Rates of high-risk drinking rose faster in women, people over the age of 65 years, minorities and individuals of a lower socioeconomic status.1

The increasing use of alcohol correlates with other studies evaluating the public health costs of alcohol consumption. In 2010, the total annual costs of drinking were estimated at $249 billion, an increase from $223.5 billion in 2006.2 The majority of the costs were linked to binge drinking.

Deaths related to alcohol use also are on the rise. The CDC estimates that about 88,000 people per year die as a result of direct (alcoholic liver disease [ALD]) and indirect factors (cancers, motor vehicle crashes, falls, homicides, suicides) associated with drinking.3 The most recent estimates reported 34,865 deaths in 2016 from alcohol-induced causes.4 The age-adjusted death rate was 9.5 per 100,000 people in this country, an increase of 26% from 2000. 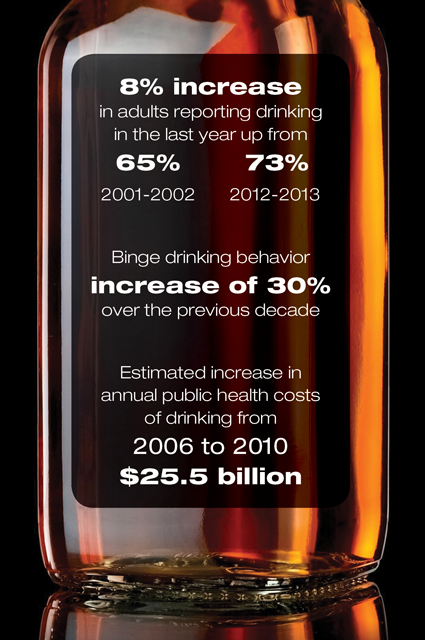 While the age-adjusted death rate was more than two times higher in men than women, the annual increases in mortality are rising faster in women, which corresponds with rising rates of binge drinking among women. In addition, a recent analysis of CDC data showed that mortality rates from cirrhosis are rising, particularly among people aged 25 to 34 years, which is driven by sepsis or peritonitis related to alcoholic cirrhosis.5 The number of deaths more than doubled in young Native Americans, Asian/Pacific Islanders and whites.

To stem the rise in ALD-related mortality, a concerted effort across multiple levels within the health care system is imperative. Policymakers should tighten the control of alcoholic beverages and taxation policies, and increase funding for mental health and substance abuse programs. Primary care providers should screen all patients for alcohol use disorder and offer early referrals to substance abuse counseling, addiction medicine or hepatology specialists, if evidence of liver disease is present. Ultimately, novel treatments for both alcohol abuse and ALD are urgently needed.

Given these grim statistics for a preventable problem, what can be done to counter this public health epidemic at the clinical level? All providers should become comfortable in discussing alcohol use with patients. That starts with knowing what constitutes a standard drink. The National Institute on Alcohol Abuse and Alcoholism (NIAAA) defines a standard drink as 14 g of pure alcohol, which is equivalent to a 12-ounce can of beer with 5% alcohol, a 5-ounce glass of wine containing 12% alcohol, or a 1.5-ounce shot of liquor at 40% alcohol.6

The NIAAA recommends avoiding alcohol for individuals who are going to drive or operate machinery; take medications that interact with alcohol; have a medical condition, such as liver disease, that may be exacerbated by alcohol; or pregnant or trying to become pregnant.7

The exact safe amount of alcohol to consume is unknown, as no randomized clinical trial has been performed to determine a safe or beneficial amount of alcohol for the general population. A recent large, multicenter randomized NIAAA clinical trial to assess the health benefits of moderate drinking was canceled after investigative reporting revealed funding was solicited from the alcoholic beverage industry.8

Based on the findings of a recent global meta-analysis of alcohol use, a “healthy” amount of drinking may not exist. From a public health perspective, the safest amount to drink to minimize individual risk is 0 g of alcohol per week. This conclusion is based on an analysis suggesting the potential health benefits of reduced ischemic heart disease and diabetes are offset by increased risks for cancer.9 The World Health Organization identifies alcohol as a Class 1 human carcinogen based on numerous studies linking alcohol consumption to increased risks for oropharyngeal, esophageal, breast, liver and colorectal cancers.10

A moderate amount of evidence suggests screening for alcohol use disorder in adults is beneficial and recommended by the U.S. Preventive Services Task Force (USPSTF).11 The USPSTF advises using either the Alcohol Use Disorders Identification Test-Consumption (AUDIT-C) or Single Alcohol Screening Questionnaire as an initial screening tool; both include simple questions that can be administered in five minutes or less. If the screening tools are positive, the full AUDIT can be administered (Tables 1 and 2).12 A positive AUDIT score should lead to referral to an addiction medicine specialist for further treatment. The NIAAA has a helpful website to guide patients at https://alcoholtreatment.niaaa.nih.gov.

The American College of Gastroenterology (ACG)13 and the European Association for the Study of the Liver14 published clinical practice guidelines on ALD in 2018. The ACG recommends that people who consume a heavy amount of alcohol (defined as more than three drinks per day for men and more than two per day for women) should be counseled that they are at increased risk for developing ALD and offered resources to help cut down on or quit drinking.

Patients with other chronic liver diseases, such as viral hepatitis or non-alcoholic fatty liver disease, should minimize their intake or avoid alcohol entirely. Baclofen and brief motivational interviewing have low levels of evidence in preventing alcohol relapse.

In patients with a positive AUDIT score and abnormal liver enzymes, referral to a gastroenterologist or hepatologist—in addition to an alcohol addiction specialist—should be offered. Noninvasive testing with ultrasound or elastography can be used to assess for fibrosis; liver biopsy may be an option but is not routinely recommended in these patients.

In patients with alcoholic hepatitis (AH), management strategies consist of alcohol cessation, early enteral nutrition to increase caloric intake, treatment with corticosteroids (if no contradictions, moderate level of evidence), and consideration of referral to a liver transplantation center in highly selected patients. The Model for End-Stage Liver Disease (MELD) score, Maddrey discriminant function (MDF) and Lille model are helpful in assessing severity of disease, and have moderate prognostic ability.

Patients with severe AH (MELD >20; MDF >32) should be hospitalized to assist with alcohol cessation, monitor for withdrawal, and rule out underlying infections. Although the FDA has not approved any drugs for AH, corticosteroids (40 mg daily of prednisone or prednisolone, or 32 mg per day of methylprednisolone) are often given off-label for 28 days followed by a gradual taper once infections have been ruled out. The Lille score (www.lillemodel.com/ score.asp) can be calculated on day 7; if the score remains high (>0.45), corticosteroids are often stopped, as risks of therapy outweigh benefits, and referral to a liver transplantation center in highly selected candidates is considered. An infusion of N-acetylcysteine can be given for five days while awaiting cultures or in conjunction with steroids due to a possible association with reduced risk for developing hepatorenal syndrome.15 A recent multicenter study involving early liver transplantation in AH demonstrated a one-year survival rate of 94% and a three-year survival rate of 84%. Sustained alcohol use after liver transplantation occurred in 10% and 17% of patients at one and three years, respectively, and was associated with higher mortality.16 Palliative care should be offered to patients with severe AH who continue to consume alcohol or are not deemed to be transplant candidates (see article, “Study Finds Strong Benefits Of Transplant in Alcoholic Patients”).