A 22-year-old woman presented to the OR for a rectal examination and rectal fistula repair. She had a body mass index of 35 kg/m2 and a history of hypothyroidism, depression and migraines. Upon presentation, her hypothyroidism had resolved and levels of thyroid-stimulating hormone and free thyroxine were normal. Her medications consisted of ibuprofen, oxycodone, sumatriptan and venlafaxine. She received 2 mg of IV midazolam on the way to the OR. In the OR, standard monitors were placed and vital signs were normal. General anesthesia was induced with lidocaine 60 mg, fentanyl 50 mcg, propofol 120 mg and succinylcholine 60 mg, and a 7.0-mm endotracheal tube was placed on the first attempt. Anesthesia was maintained with sevoflurane.

Immediately after the patient was placed in the high lithotomy position, bradycardia ensued with a heart rate in the 30s beats per minute, which was treated with glycopyrrolate 0.2 mg IV. The patient developed supraventricular tachycardia and hypertension, with values reaching 220 mm Hg systolic over 110 mm Hg diastolic. Esmolol IV in 10-mg increments was administered with a total of 50 mg IV, with no response. Blood pressure decreased after administration of labetalol 20 mg IV and the short surgical procedure was completed. The patient resumed spontaneous breathing, but immediately after discontinuation of sevoflurane she developed acute pulmonary edema, severe hypotension and ST segment depression.

A norepinephrine infusion was started and the patient was transferred intubated to the ICU. The ECG showed findings consistent with acute coronary ischemia (inferior Q waves, flattened T waves in lateral leads and prolonged QT interval). A chest CT scan showed opacification of the pulmonary arterial vascular system, consolidation and ground glass opacities affecting all lung lobes. An echocardiogram showed moderate to severe mid-left ventricular hypokinesis, mild tricuspid regurgitation, severely reduced left ventricular systolic ejection fraction of 38%, restrictive grade III diastolic dysfunction, and elevated left ventricular filling pressure. The N-terminal pro-brain natriuretic peptide (NT proBNP) was elevated at 456 pg/mL. Based on these findings, the patient was diagnosed with Takotsubo stress cardiomyopathy. On the first postoperative day (POD), the patient was weaned off the norepinephrine infusion and was extubated later that day. A repeat ECG and echocardiogram the next day, POD 2, showed normal findings, and the patient was discharged without sequelae. 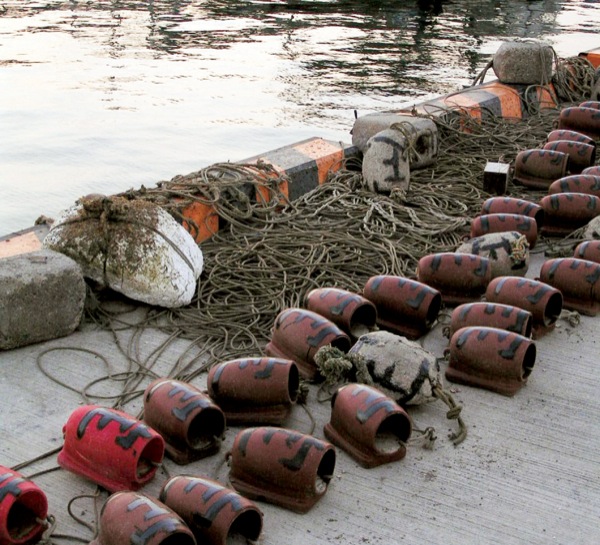 Figure. The Japanese octopus traps after which this disease is named.

The pathophysiology of TCM is still not fully understood; however, it seems that a catecholamine surge caused by severe emotional or physical stress is the common denominator in the majority of cases.6,7 The term “broken heart syndrome” reflects the association of the syndrome with profound emotional stress. Women of postmenopausal age are most commonly affected, but TCM is also reported in younger patients, including pregnant women.6,8

Templin et al analyzed data from the International Takotsubo Registry, including 1,750 patients; 89% were female with a mean age of 66.8 years. The authors reported a significantly higher incidence of TCM in patients with neurologic or psychiatric disorders.3 A possible genetic predisposition was suggested based on case reports of familial involvement.9,10 Serotonin–norepinephrine reuptake inhibitors (SNRIs) have been involved in triggering TCM.11 The symptoms of TCM mimic acute coronary syndrome (chest pain, shortness of breath, sweating, dizziness, nausea/vomiting, weakness and palpitations) and may not be identified under general anesthesia. An ECG may show ST segment elevation and depression, T-wave inversion, QT interval prolongation, abnormal Q waves and other changes.2,3 Apical or left mid-ventricular ballooning, akinesia or hypokinesia with compensatory hypercontractility of the basal wall are the characteristic echocardiographic findings along with a significant decrease in the ejection fraction (observed in approximately 90% of patients with TCM).3,12

Cardiac biomarkers are elevated in the vast majority of patients with TCM. Troponin levels are typically increased but to a lesser extent than in patients presenting with acute myocardial infarction. Level of NT proBNP was identified as a reliable predictor of short- and long-term complications.13

Treatment is mainly supportive, with angiotensin-converting enzyme inhibitors/angiotensin receptor blockers, beta blockers and diuretics.14 Ueyama showed in an animal model that beta blockade may be particularly beneficial in treating TCM.15

The incidence of TCM developing in the perioperative period is one in 6,700 cases. Multiple types of surgical procedures have been reported in patients developing perioperative TCM, including gastrointestinal, cardiothoracic, orthopedic and transplant surgeries as well as cesarean delivery.17,18 Although TCM is most frequently associated with general anesthesia, it has also been reported with regional anesthesia and sedation. Agarwal et al reviewed 93 articles describing 102 patients with perioperative TCM. The majority of cases (58%) developed in the postoperative period. Preoperative occurrence of TCM has also been reported, most likely triggered by the patient’s anxiety.19 Intraoperative triggers reported to cause TCM are mainly related to intensive catecholamine discharge, such as laryngoscopy, intubation, extubation and light levels of anesthesia. Isoflurane has been shown to lessen the apical akinesia in animals with TCM induced by intraperitoneal injection of isoprenaline.20

In the patient described here, the ECG and echocardiographic pathognomonic signs, along with elevated NT proBNP levels, allowed for a quick diagnosis without the need to perform an unnecessary cardiac catheterization.

The following points about TCM are most noteworthy: