As the problems associated with excessive blood utilization have become apparent, many hospitals around the country are turning to blood management programs as the answer, but the optimal ways to reduce unnecessary red blood cell transfusions remain unclear.

While focusing on evidence-based, restrictive hemoglobin triggers is the most common approach, recent analysis indicates that promoting single-unit red blood cell (RBC) transfusions may be an even more effective strategy to reduce unnecessary transfusions. Based on data collected over a three-year period from three community hospitals, a single-unit transfusion initiative called “Why give 2 when 1 will do?” was shown to be an independent predictor of decreased blood utilization, while compliance with a hemoglobin trigger was not. According to the authors, however, both strategies have the potential to reduce unnecessary transfusions when used as part of a comprehensive blood management program.

“Establishing a blood management program can save a tremendous amount of money for hospitals and provide better clinical outcomes for patients,” said Steven M. Frank, MD, professor of anesthesiology and critical care, and director of the blood management program at Johns Hopkins School of Medicine, in Baltimore. “For hospitals that are ready to start such a program, focusing on the transfusion of one unit rather than two may be the most effective strategy to achieve those outcomes.”

As Dr. Frank reported, recent studies by the Agency for Healthcare Research and Quality and the Joint Commission have shown that blood transfusion is not only the most common procedure performed in U.S. hospitals (HCUP Statistical Brief #165. October 2013. Agency for Healthcare Research and Quality, Rockville, Md. www.hcup-us.ahrq.gov/?reports/?statbriefs/?sb165.pdf) but also one of the top five overused procedures (Proceedings from the National Summit on Overuse. September 24, 2012. The Joint Commission. www.jointcommission.org/?assets/?1/?6/?National_Summit_Overuse.pdf).

“What’s apparent from previous prospective, randomized trials is that clinical outcomes were either the same or better using lower hemoglobin thresholds for red blood cell transfusions, which suggests that giving more blood than necessary is actually not helpful and may even be harmful,” Dr. Frank said. “Moreover, although it’s been recognized that single red blood cell units are often adequate to treat the signs and symptoms of anemia, this practice has not been fully adopted.”

To determine the optimal methods of reducing unnecessary RBC transfusions, Dr. Frank and his colleagues examined data from three community hospitals in the Johns Hopkins health system before and after initiation of a patient blood management program. The first step of the program was to promote a hemoglobin threshold of 7 or 8 g/dL instead of the historical standard of 9 or 10 g/dL throughout the health system.

The second step was a campaign called “Why give 2 when 1 will do?” that encouraged single-unit RBC transfusions in patients who are hemodynamically stable and not actively bleeding. Data were analyzed at monthly intervals to determine the relative effect of the respective efforts. Univariate and multivariate analyses were used to identify independent effects of these two interventions on overall RBC utilization.

As Dr. Frank reported at the 2017 annual meeting of the International Anesthesia Research Society (abstract 1292), investigators evaluated the data a year after implementation of the program. Univariate analysis showed that both the increase in single-unit transfusions (from 38.0% to 70.9%; P<0.0001) and the decrease in RBC orders with hemoglobin trigger at least 8 g/dL (from 45.7% to 25.0%; P<0.0001) were associated with falling RBC utilization (Figure). After controlling for each of the interventions in a multivariate analysis, however, investigators found that the single-unit transfusion was an independent predictor of decreased RBC unit utilization, while hemoglobin thresholds were not. 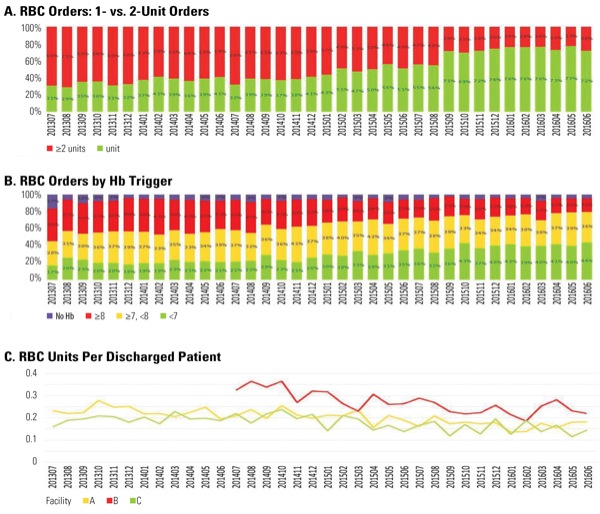 “With these two combined efforts, blood utilization decreased by nearly 30% per patient among these three hospitals that had not had blood management programs,” said Dr. Frank, who noted that utilization fell from 0.254 to 0.185 units per patient (P=0.0009).

Despite the success of the “Why give 2 when 1 will do?” campaign, investigators cautioned that hospitals with high baseline rates of single-unit transfusions may not experience the same effect on utilization. Dr. Frank also reported initial resistance from trauma surgeons and hematologists when the single-unit policy began. “There were some concerns about undertransfusion, which is why patients with active bleeding and hemodynamic instability were recognized exceptions to the single-unit recommendation.”

The moderator of the session, Jean-Francois Pittet, MD, professor of anesthesiology and perioperative medicine at the School of Medicine of the University of Alabama at Birmingham, shared insights from his own institution’s implementation of a blood management program.

“Prior to starting our program, there were surgeons giving two units of blood systematically to these patients,” Dr. Pittet said. “We made it so that at hemoglobin triggers of 7, the use of more blood has to be justified in the chart or electronic medical record, which is subsequently reviewed by colleagues. As a result of this program, we also observed a 30% to 40% decrease in the number of units.”

Dr. Pittet added, “Having to justify the use of additional blood is important. It’s not to punish people, but if someone systematically gives more blood than necessary, there should be accountability.”