Transitioning to a dexmedetomidine-based sedation strategy should decrease mortality rates in post–cardiac surgery patients, according to a new study, and delirium in patients receiving dexmedetomidine was also found to be reduced.

“At our institution, we use dexmedetomidine as the first-line sedative medication for patients in the CTICU [cardiothoracic ICU] because we have noted that it provides excellent sedation with minimal side effects,” said Nathan Clendenen, MD, MS, a cardiac anesthesiologist and an assistant professor of anesthesiology at the University of Colorado School of Medicine, in Aurora. “Previous work has demonstrated that dexmedetomidine induces a sedative state that more closely resembles physiological sleep, which may explain some of its clinical benefits.”

In research presented at the 2019 annual meeting of the Society of Cardiovascular Anesthesiologists (SCA), investigators conducted a retrospective cohort analysis of patients who underwent invasive monitoring with a pulmonary artery catheter between 2011 and 2018. In total, 1,587 patients who stayed in the CTICU for at least two days were included. 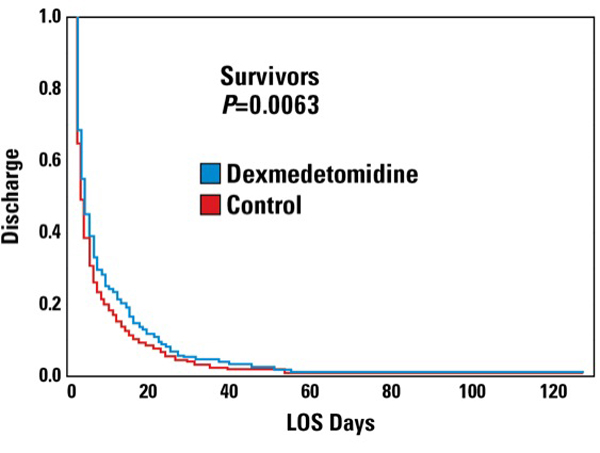 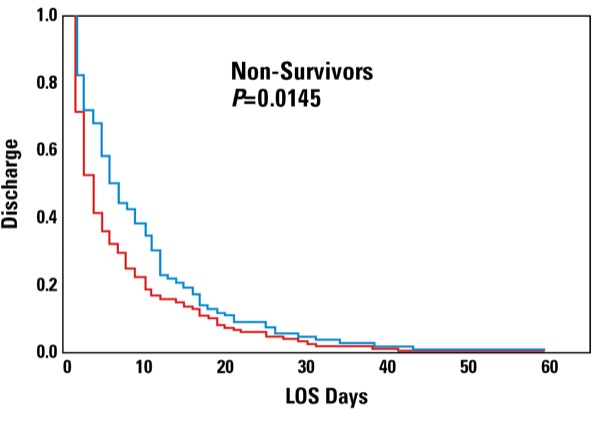 Figure. Kaplan-Meier curves comparing lengths of stay in surviving and nonsurviving patients with and without dexmedetomidine.

Dr. Clendenen commented on the clinical implications of the study. “Our study supports an association between sedative choice and clinical outcomes for patients, which has two key implications for current and future research: Clinical studies involving the CTICU should consider standardizing the sedative protocols to avoid confounding factors when attempting to assess a novel intervention, and the postoperative period is a critical time that likely plays a key role in determining how patients fare after surgery.

When asked about his practice of anesthesiology at the University of Colorado, Dr. Clendenen said, “Our practice at the University of Colorado is to personalize each patient’s care to their clinical needs, and if they require sedation, we commonly use dexmedetomidine given the clinical benefits mentioned above, and our current research demonstrates that it may be associated with better outcomes in CTICU patients.”

In a separate interview, Dirk J. Varelmann, MD, a cardiac anesthesiologist at Brigham and Women’s Hospital and an assistant professor of anesthesia at Harvard Medical School, both in Boston, provided further information on dexmedetomidine.

“Dexmedetomidine is increasingly used in cardiac surgery patients. It can provide light to moderate sedation to separate the patients from the ventilator. A meta-analysis of randomized controlled trials has shown that dexmedetomidine reduced the incidence of postoperative delirium in patients after cardiac surgery. It also reduces the duration of mechanical ventilation. Similarly, in a Chinese population, the perioperative use of dexmedetomidine in cardiac surgical patients was associated with a reduced incidence of atrial fibrillation. However, it had no influence on short-term or long-term [one-year] mortality,” Dr. Varelmann said.

Dr. Varelmann concluded, “I think that without propensity matching, it is hard to interpret the results. A randomized controlled study—preferably double-blinded—would shed more light on the effects of dexmedetomidine on mortality and duration of hospitalization.”