Available reports suggest that an anterior mediastinal mass causing more than 50% narrowing of the trachea and compressing the great vessels can cause further narrowing of the airway and cardiovascular collapse after the administration of muscle relaxants.1,2 Accordingly, either inhalation induction of general anesthesia or awake intubation is used to avoid muscle relaxation.3,4

A 68-year-old woman with recurrent large B-cell lymphoma presents following multiple rounds of chemotherapy and palliative radiation. The patient developed progressive shortness of breath over a three-month period. The patient also complained of a choking sensation, hoarseness, dysphagia, and orthopnea along with increasing neck size.

A CT scan showed a large anterior mediastinal mass measuring 9.3 cm. The mass encased the great vessels and the aortic arch, narrowing the tracheal luminal diameter to 7 mm (Figure 1A and B). The patient was scheduled for a rigid bronchoscopy for placement of a tracheal stent.

A. Axial view.
B. Sagittal view. 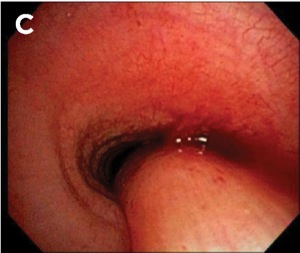 The patient was taken to the bronchoscopy suite and placed in a sitting position. Preoxygenation with non-rebreather face mask was started using standard American Society of Anesthesiologists monitoring. Additionally, bispectral index (BIS) and noninvasive arterial blood pressure monitoring were used. Propofol infusion of 250 mcg/kg per minute and 50 mcg of fentanyl were given. As the BIS reading dropped to the 60s, PPJV was initiated, with tidal volume in the range of 500 mL, a peak airway pressure of 20 cm H2O and an inspiratory–expiratory (I:E) ratio of 1:4 to avoid air trapping.

As the vital signs and oxygen saturation remained stable, the patient was gradually lowered to a supine position, at which the stability of the vital signs and ventilation were reassessed and deemed stable, and 120 mg of succinylcholine was given intravenously. Ventilation and hemodynamics were unchanged after muscle paralysis, an 11.2-mm rigid bronchoscope was inserted without difficulty, and PPJV was commenced.

Airway examination showed that the positive pressure generated by jet ventilation was associated with an increase in the diameter of the airway and adequate chest rise. However, during the expiratory phase, the airway diameter decreased to the narrowed baseline. As a result, we elected to increase the expiratory time to allow for adequate exhalation. Neuromuscular relaxation was maintained during the procedure using 5 mg of cisatracurium.

Bronchoscopic airway inspection revealed 70% to 80% obstruction of the trachea and main carina, 10% obstruction of the proximal right main stem bronchus and 60% obstruction of the left main stem (Figure 1C). A CRE balloon dilatation catheter (Boston Scientific) was used in the trachea. The patient was then extubated and reintubated using a 13.2-mm rigid bronchoscope through which a silicone Y stent was deployed (Figure 2A-C). The rigid bronchoscope was then removed and a laryngeal mask (LM) airway was placed. Muscle relaxation was reversed and the patient was extubated. The patient’s dyspnea and stridor resolved immediately after the procedure. 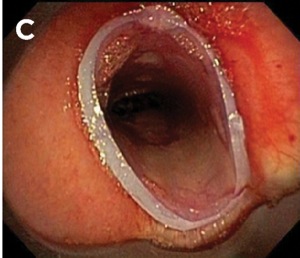 A 74-year-old man with advanced, poorly differentiated squamous cell carcinoma of the esophagus presented with acute worsening of shortness of breath shortly after undergoing an upper endoscopy. The patient complained of retrosternal chest discomfort and was noted to have wheezing and stridor. A CT scan of the chest revealed a large mediastinal mass, suggestive of a mediastinal abscess. The tracheal lumen was narrowed by approximately 80%. There were bilateral pleural effusions and a mild to moderate pericardial effusion (Figure 3A and B).

A. Axial view.
B. Coronal view. 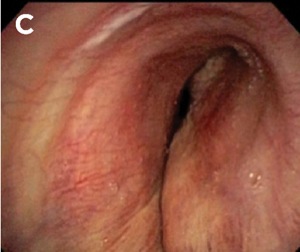 The patient was positioned, monitored, and preoxygenated in a similar manner to case 1. Anesthesia was induced with a propofol infusion at the rate of 200 mcg/kg per minute. Bag-mask ventilation was difficult due to the inability to create an adequate mask seal. As a result, an LM airway was inserted. PPJV through the LM airway was adequate, with tidal volumes of 500 to 800 cc at a peak airway pressure of 18 cm H2O and an I:E ratio of 1:4.

The patient was gradually lowered to a recumbent position, and adequate ventilation and hemodynamics were confirmed. Airway examination showed 80% obstruction of the trachea (Figure 3C) with an increase in airway diameter with PPJV and subsequent return to the narrowed baseline during the expiratory phase. The patient’s hemodynamics and ventilation remained stable before 6 mg of cisatracurium was administered. The LM airway was removed, the patient was intubated without difficulty using a 12-mm diameter rigid bronchoscope, and PPJV was initiated.

The trachea was dilated using the barrel of the rigid bronchoscope and a self-expanding hybrid metal stent was deployed into the lower trachea (Aero Tracheobronchial Stent System, 18 × 60 mm; Merit Medical) (Figure 4A-C). The rigid bronchoscope was then removed and an LM airway was placed. The muscle relaxation was subsequently reversed and the patient was extubated. The patient reported marked improvement in his dyspnea following the procedure. 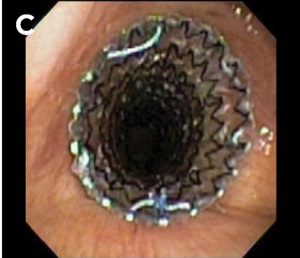 These cases illustrate that safe use of TIVA, including the judicious use of muscle relaxants, in patients with mediastinal masses compressing the tracheobronchial tree is possible. Key elements are:

Difficulty with bag-mask ventilation in patients with an anterior mediastinal mass is generally attributed to the narrowing of the airway; however, in our experience, particularly in patients with extrinsic airway compression, this is not the case. Under direct bronchoscopic vision, the airway diameter is actually noted to enlarge when PPJV is administered. The airway diameter is even larger when positive pressure is given in a paralyzed patient, as muscle relaxation enhances airway and lung expansion. This suggests that at least some of the difficulties reported in bag-mask ventilation of these patients may be due to air trapping and consequent hyperinflation.

It is also important to note that our back-up plan in both of these cases was to insert the rigid bronchoscope under local anesthesia if difficulty in ventilation or hemodynamic instability were encountered during induction.5,6 Additionally, pediatric patients are known to have more collapsible airways than adults, and the aforementioned technique was not examined in the pediatric population.7,8 The anesthesia technique described in these case reports was used in cases where airway stenting was planned and should not be used in other procedures, such as mass biopsy or central line placements, where a rigid bronchoscope and airway stent are not available.9,10