With opioid-related deaths exceeding more than 70,000 in the past year alone, it’s hard to be optimistic about the opioid epidemic. A recent study of a prescription drug monitoring program, however, suggests the tide may be turning—in Texas, at least.

Analysis of the state-level database, which contains records of all controlled substance prescriptions filled within Texas, showed evidence of reduced opioid prescribing since 2017. As Texas’ population grew by 1.4% annually, the median number of controlled substance doses prescribed decreased by 0.09% per year, authors of the study reported.

“At the very least, these data would suggest that we are making headway in decreasing the total amount of opioid prescribing,” said John C. Alexander, MD, MBA, an associate professor in the Department of Anesthesiology and Pain Management at the University of Texas Southwestern Medical Center, in Dallas. “I think all the awareness has finally started to make an impact, and hopefully, this will lead to decreased addiction and opioid-related overdose deaths.”

“The opioid epidemic has been on the forefront of the national consciousness the last few years,” said Dr. Alexander, who noted that deaths from opioid overdoses are outpacing deaths from motor vehicle accidents as a cause of death for the first time. “It’s an immense public health problem.”

For this study, Dr. Alexander and his colleagues analyzed Texas’ prescription drug monitoring program for descriptive statistics related to opioid prescribing habits. The researchers obtained aggregate data for monthly gross numbers of controlled prescriptions on a month-to-month basis per county from April 2015 through May 2018. Using linear regression modeling for analysis, the researchers then integrated the prescribing data with demographic information from the U.S. Census, including ethnicity and income data, to explore what population-level characteristics drive rates of controlled substance prescribing.

As Dr. Alexander reported at the 2019 annual spring meeting of the American Society of Regional Anesthesia and Pain Medicine, the median number of controlled substance doses prescribed per month in Texas was approximately 200 million from April 2015 through May 2018. Over that time period, Texas’ population grew 1.4% annually, but opioid prescribing decreased by 0.09% per year. Although opioid prescribing rates were highly variable geographically across the state, said Dr. Alexander, they have decreased overall since 2017. 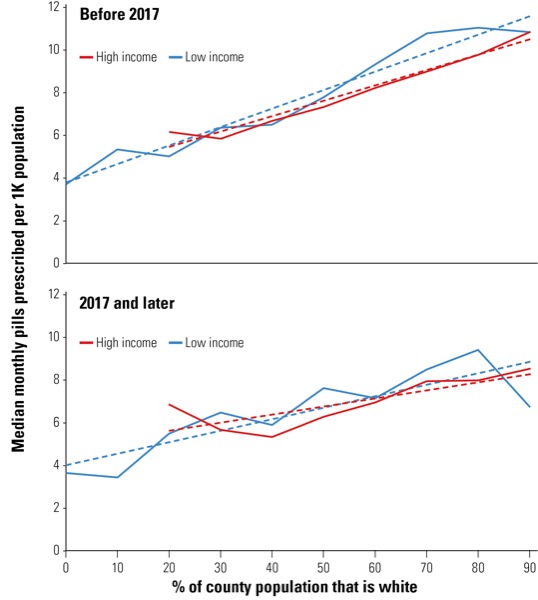 Figure. Effect of white ethnicity and income on opioid prescribing.

Although the data showed no association between opioid prescribing and income alone, when combined with ethnicity, researchers observed an even stronger correlation between controlled substance prescribing and white populations with lower income status prior to 2017. Since 2017, however, these correlations were no longer observed, said Dr. Alexander, especially in poorer counties with the highest proportion of white residents.

“It took a long time, but it looks like the medical community is starting to realize we were contributing to the problem, not the solution,” Dr. Alexander concluded. “That being said, we still want to use opioids appropriately for the right patients in the right settings so that we can help treat pain.”

Michael Kim, MD, a clinical assistant professor of anesthesiology at Keck School of Medicine of the University of Southern California, in Los Angeles, said that the opioid epidemic has caused prescribers to become “hyperaware” of the potential ramifications of their decisions, which, in turn, has led to changes in prescribing practice.

“At the end of the day, the ultimate goal for us is to help patients get over acute periods of pain,” Dr. Kim said. “Once we’ve gotten patients over that acute period, we should not continue to prescribe purely for fear that they ‘might’ have pain when their entire hospital stay has dictated that they have not needed it and we know that response goes down over time.

“Unfortunately, the notion of pain as the ‘fifth vital sign’ is still ingrained in some providers,” Dr. Kim continued. “By closely examining risk factors for opioid misuse and continuing to raise awareness, however, we can actively break this cycle.”