Authors: Jacqueline M. Leung, MD, MPH; Daniel J. Cole, MD, FASA
ASA Monitor March 2021, Vol. 85, 1–12.
Postoperative delirium is a geriatric syndrome associated with prolonged hospital length of stay and worsened functional and cognitive status after hospital discharge. Despite its prevalence, its pathophysiology is incompletely understood. Delirium is a complex interplay between patient vulnerability and precipitating factors. Although surgery is not a prerequisite for the occurrence of delirium, the prevalence of postoperative delirium after major surgery in the older patients is high, ranging from 10%-60% (Psychiatr Clin North Am 1996;19:429-48). Understanding the pathophysiology of postoperative delirium may also lend insight into revealing the mechanism underlying neurodegeneration such as Alzheimer’s Disease, as postoperative delirium typically occurs in patients with prior cognitive impairment.

Given the powerful effects of general anesthetics on the brain and the numerous medications surgical patients are exposed to during and after surgery, some have hypothesized that anesthetics may be toxic to the brain, manifested as adverse postoperative cognitive changes, including delirium. Specifically, are we often “overdosing” our patients and unnecessarily exposing them to the potential adverse effects of general anesthetics?

Recent advances in anesthesia research have focused on neurotoxicity and neuroinflammation as potential mechanisms in postoperative cognitive changes, but a comparable animal model of postoperative delirium is not feasible, therefore the exact pathophysiology of postoperative delirium is still unknown. However, if the hypothesis that “excessive anesthetics” is harmful to the patient is proven true, then a device that would monitor such “overdose” would be immensely helpful during surgery.

Recently, it has been proposed that use of a processed electroencephalogram (EEG) monitor during surgery may be associated with a lower rate of postoperative delirium. Several studies speculated that patients who were monitored with processed EEG may have a lighter anesthetic depth as estimated by processed EEG, which may lead to lower rates of postoperative delirium. Subsequent studies reported that patients with more EEG burst suppression as monitored by processed EEG during surgery were more likely to experience delirium (BMC Anesthesiol 2015;15:61; Anesth Analg 2016;122:234-42; Anesthesiology 2020;133:280-92). A burst suppression pattern on EEG is typically associated with a severe reduction in the brain’s neuronal activity and metabolic rate.

Given these reports, there was a lot of excitement as to whether processed EEG should be routinely used during surgery, particularly in older surgical patients. The hypothesis is that anesthetics particularly in excessive doses may be toxic to the brain, manifested as postoperative delirium. Therefore, a monitor that can detect “anesthetic overdose” as evidenced by burst suppression may be reduced through a down titration of the anesthetic, typically a volatile agent. In fact, some suggest that processed EEG should be incorporated in a delirium reduction clinical pathway. So, is this recommendation, in fact, evidence-based?

“…are we often ‘overdosing’ our patients and unnecessarily exposing them to the potential adverse effects of general anesthetics?”

Leung et al. (Anesthesiology 2018;129:417-27) conducted a meta-analysis that included five studies in a quantitative postoperative delirium analysis, with data pooled from 2,654 patients (Mayo Clin Proc 2010;85:18-26; J Neurosurg Anesthesiol 2013;25:33-42; J Anesth Clin Res 2012;3:6; Br J Anaesth 2013;110 Suppl 1:i98-105; Anesth Analg 2014;118:809-17). The use of processed EEG-guided anesthesia was associated with a 38% reduction in odds for developing postoperative delirium [Odds ratio (OR = 0.62; p<0.001; 95% confidence interval (CI) 0.51 to 0.76]. Including the data published more recently by the Electroencephalography Guidance of Anesthesia to Alleviate Geriatric Syndromes trial (JAMA 2019;321:473-83) resulted in the accompanying forest plot. The aggregated OR computed between processed EEG monitoring and postoperative delirium for all six studies using the fixed-effects model was 0.66 (p<0.001; 95% CI, 0.55 to 0.77; I2=40%) (Figure). However, if excluding the one study by Sieber et al. that had a slightly different study goal in which patients undergoing hip fracture surgery and spinal anesthesia were monitored with processed EEG with the bispectral index (BIS) and randomized to receive either deep (BIS, approximately 50) or light (BIS, ≥80) sedation, the relationship between the use of processed EEG and reduced incidence of postoperative delirium was no longer significant (Anesth Analg 2020;131:712-9). 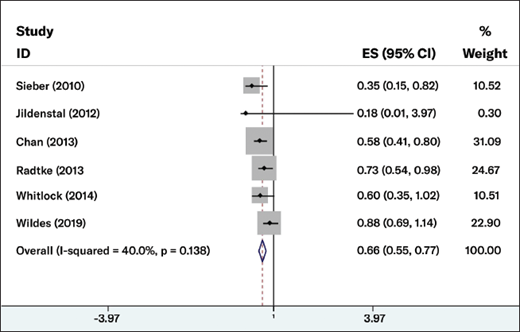 Forest plot of odds ratios (OR, solid dots) for postoperative delirium in the trials of processed electroencephalogram-guided (high target) vs. routine (low target) anesthesia. The gray squares are shown in size proportional to weight assigned in metaanalysis. The aggregated odds ratio is shown as the vertical dotted line. Associated 95% confidence intervals are indicated by the solid bars and lateral tips of the diamond.

Therefore, whether the use of processed EEG will reduce the occurrence of postoperative delirium through a reduction in burst suppression remains unknown as it is likely that this hypothesis will be proven true only in patients who are cognitively vulnerable, a much-needed future investigation.