The quadratus lumborum and posterior transversus abdominis plane (TAP) blocks can be used interchangeably after laparoscopic gynecologic surgeries, a Japanese research team concluded. Although visual analog scale (VAS) pain scores were lower in patients who received the quadratus lumborum block at some time points, the demand for postoperative fentanyl and other analgesics was similar between groups.

“Both the posterior transversus abdominis plane block and quadratus lumborum block have been developed as ultrasound-guided regional anesthetic techniques for postoperative pain control after abdominal surgery,” said Yuki Aoyama, MD, clinical fellow in anesthesiology at Shimane University Hospital, in Izumo, Japan. “Although their effects have been demonstrated in recent clinical reports and trials, there is still a lack of data regarding the sensory blocks and the mechanism of analgesic effects.” As such, the study’s primary goal was to observe the blocks’ analgesic effects and sensory blocks after gynecologic laparoscopic surgery.

A total of 40 patients (ASA physical status I-II, aged 30-79 years), all of whom were undergoing gynecologic laparoscopic surgery, completed the prospective double-blind study. Patients were alternately divided into two groups to receive either the TAP (n=20) or quadratus lumborum block (n=20) after induction of general anesthesia and tracheal intubation. Blocks were performed with the patient in a supine or slightly wedged position.

Patients undergoing the TAP block had a 21-gauge needle inserted from the lateral abdomen between the iliac crest and costal margin, which was advanced to between the internal oblique and near the posterior end of the transverse abdominal muscle. Needle insertion was similar in quadratus lumborum block patients, but then advanced to reach the posterior aspect of the quadratus lumborum. Each group received a bilateral block with 20 mL of 0.375% levobupivacaine for each side.

General anesthesia was induced with propofol, 4 mcg/kg of fentanyl and rocuronium, and then maintained with 0.1 mcg/kg per minute of remifentanil (Ultiva, Mylan) and propofol to maintain bispectral index levels between 40 and 60. Postoperative pain control was achieved with IV patient-controlled fentanyl.

The researchers collected a variety of postoperative data, including VAS pain scores at rest and while coughing, cutaneous blocked sensory levels as determined by loss of cold and pinprick sensation, postoperative fentanyl consumption, use of other analgesics, and adverse events such as nausea and vomiting. All data were collected at six, 12, 24 and 48 hours after the blocks were performed.

As Dr. Aoyama reported at the 2017 annual meeting of the American Society of Anesthesiologists (abstract BOC05), VAS scores for pain at rest were significantly lower (P<0.05) in quadratus lumborum block patients at both 12 and 48 hours after block placement, but not at six or 24 hours (Figure). On the other hand, the two blocks yielded comparable results for VAS while coughing, postoperative fentanyl consumption and demand for other analgesics. 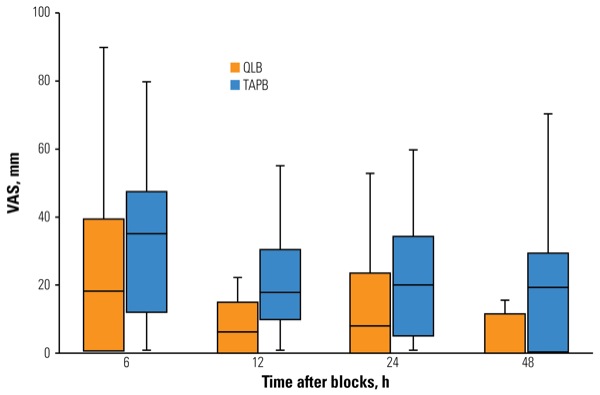 “We also studied postoperative dermatomal sensory assessment,” Dr. Aoyama said. “We found that the median dermatomal number of sensation loss was smaller than three in both groups for 12 hours after both blocks.” Of note, only four patients in the quadratus lumborum block group developed a sensory dermatomal level higher than T10.

“We found that neither the quadratus lumborum block nor TAP block produced cutaneous sensory blockade consistently, or as extensively as shown in previous studies,” she said. “We conclude that these two blocks may be used interchangeably in patients undergoing laparoscopic gynecological surgery.”

But not all of Dr. Aoyama’s audience members thought there was benefit in using either block. “I think the bigger question here is whether we should be performing these blocks at all,” said Richard E. Harris, MD, a retired anesthesiologist living in Idaho. “And while your patients get the block, do you have any data with respect to these blocks versus no block? Should we go down this road or just use multimodal analgesia?”

“Although we wanted to study using the same group of patients comparing no block with the study blocks, we had difficulty getting [institutional review board] approval, so we couldn’t do it,” replied study co-investigator Shinichi Sakura, MD. “But we’re happy to find that it actually works. And sometimes the gynecologic surgeon didn’t know anything about this block at all, but the effect was very obvious. So I’m very positive about these blocks.”