We report profound lip and tongue swelling and hypotension in a 71-year-old woman after anesthesia induction. There was no bronchospasm, urticaria, or rash, so anaphylaxis was not initially suspected. She was treated with phenylephrine, ephedrine and boluses of fluid. When hypotension was refractory to these interventions, she was treated for anaphylaxis with epinephrine, diphenhydramine, and dexamethasone. She had an elevated tryptase level (>7 times), consistent with the diagnosis of anaphylaxis. Subsequent allergy testing was inconclusive. This case report presents an association of isolated lip and tongue swelling with anaphylactic reactions.

A perioperative anaphylactic reaction is rare, with a reported incidence of 1 in 6,000 to 1 in 20,000.1 When it happens, anesthesiologists and nurse anesthetists may fail to diagnose the condition due to its variable presentation or coexisting hypotension induced by induction drugs. Multiple etiologies for objective signs of anaphylaxis, such as hemodynamic collapse, high airway pressures, and wheezing, are present in the perioperative milieu. Skin findings may be obscured by surgical drapes, and subjective reports of dyspnea and abdominal symptoms are often impossible to obtain from an anesthetized patient.

A preoperative nuclear medicine stress test was negative for inducible ischemia; preoperative lab test results were remarkable only for elevated blood urea nitrogen and creatinine levels; she had no known drug allergies; and her physical exam was otherwise unremarkable. Midazolam was administered prior to transfer to the OR, and induction of anesthesia was achieved with lidocaine, fentanyl, propofol, rocuronium, and sevoflurane.

During arterial line placement, the patient became mildly hypotensive, which was briskly responsive to phenylephrine boluses. Next, a latex Foley was placed and cefuroxime given. Central access was obtained with difficulty in the right subclavian artery on the second attempt, following 3 unsuccessful attempts at right internal jugular access. After the subclavian central venous catheter ports were drawn back and then flushed with normal saline, the patient became progressively hypotensive and unresponsive to both phenylephrine and ephedrine boluses.

There was immediate concern about tension pneumothorax. Bilateral breath sounds were present without wheezing; ultrasound was used to confirm bilateral sliding signs were present to further exclude pneumothorax. A stat chest x-ray was obtained. Peak airway pressures were normal. The patient’s blood pressure dropped to 45/30 mm Hg and sevoflurane was turned off, but the patient was then noted to have an enlarged tongue, raising concern for anaphylaxis (Figures 1 and 2). The Foley was immediately removed while epinephrine was administered in 3 boluses of 10 mcg each, and dexamethasone and diphenhydramine were administered, which rapidly improved hemodynamics. 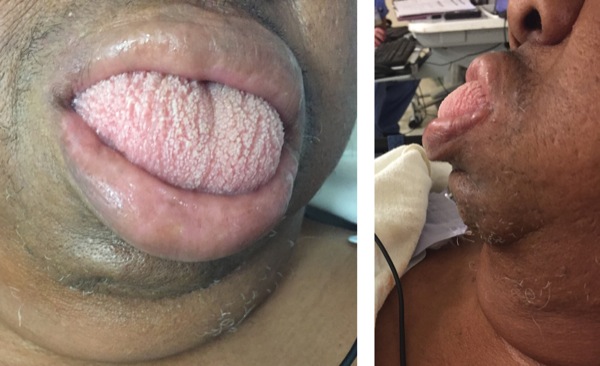 Figures 1 and 2. Views of lip and tongue swelling from the case.

The case was canceled, and the patient was extubated in the PACU following reduction in tongue swelling. The patient was admitted to the surgical ICU for observation. She was reintubated for dyspnea and airway edema 6 hours later, with use of propofol and rocuronium, and without recurrence of hypotension. She was extubated the next day and discharged home on the third day of admission without complication.

There are multiple etiologies for isolated tongue swelling, including mechanical trauma, venous/lymphatic outflow obstruction, anaphylaxis, and localized application of chemicals. None but anaphylaxis is associated with hypotension.3

The authors reported no relevant financial disclosures. The corresponding author is Dr Banik, at rkbanik@umn.edu.