A 76-year-old woman with a medical history of hypertension and oral cancer status post-left mandibulectomy, glossectomy and radiation required surgical correction of an olecranon fracture after a ground-level fall.

During the patient’s preoperative evaluation, she was found to be edentulous, with a Mallampati classification of IV, and with a short thyromental distance, micrognathia and small interincisor gap. These findings identified her as a potential difficult mask ventilation and intubation case. Preoperatively, various methods to secure this patient’s airway were discussed. One option was to use a laryngeal mask; this choice was not possible for this particular patient, however, because of her significantly decreased mouth opening. It was decided that an endotracheal tube was the best option, and we proceeded with a sedated fiber-optic intubation.

The patient was taken to the operating room and sedated with midazolam, fentanyl, low-dose ketamine, low-dose propofol and a dexmedetomidine drip. Mask ventilation was attempted but was difficult due to the patient’s micrognathia and previous mandibulectomy, so she was never paralyzed. Spontaneous ventilation was maintained throughout the induction and intubation. Fiber-optic intubation was attempted but was unsuccessful because of the patient’s very anterior larynx. Intubation was attempted with a Miller 2 blade with a grade IV view. Next, the decision was made to use the Doerges difficult airway blade for C-MAC video laryngoscopes (KARL STORZ). An adult blade was tried, but it was too large to fit into the patient’s mouth. It was decided to proceed with the pediatric Doerges blade. Using this, the patient was successfully intubated. She tolerated surgery well and was extubated fully awake at the end of the case without complications. 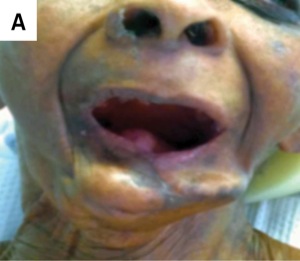 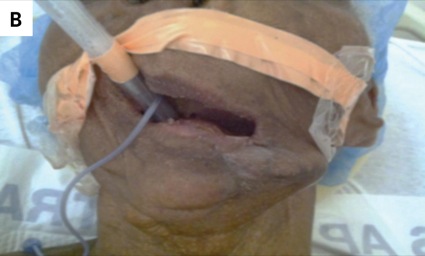 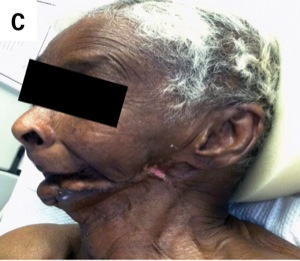 This patient had two of the five predictors of a difficult mask ventilation: lack of teeth and age greater than 55 years, giving her a sensitivity of 72% and a specificity of 74% for a difficult mask ventilation (Figure). She also had many indications of a difficult intubation: prominent overbite, inability to protrude the mandible incisors anterior to the maxillary incisors, interincisor distance less than 3 cm when the mouth is fully opened, inability to visualize the uvula, and a thyromental distance less than three fingerbreadths.

There are five categories of difficult airway:

This patient fell into four of the five categories. We adequately prepared for managing her airway. We considered various airway interventions, including supraglottic airway, awake intubation, video-assisted laryngoscopy and fiber-optic–guided intubation. We had equipment for difficult airways in the room prior to the arrival of the patient and we provided supplemental oxygen throughout the procedure. Because of our preparation and planning, we had various methods available for backup and she was successfully intubated.

Because the surgery involved the upper extremity and the patient was identified as a difficult airway preoperatively, alternative anesthetic management, such as regional nerve block with IV sedation, may have been used. However, if the block was suboptimal and necessitated intraoperative intubation, the risks might have outweighed the benefits. Thus, we decided to proceed with general anesthesia and endotracheal intubation.

In conclusion, successfully managing a difficult airway begins with assessing the patient for risk factors and recognizing a potential difficult airway preoperatively. When one is identified, it is important to have multiple plans for securing the airway, including backup plans, and have extra help available. With adequate preparation and planning, the risk for respiratory morbidity and mortality decreases significantly.