A study of perioperative IV acetaminophen in patients undergoing minimally invasive spine surgery has found no effect on postoperative pain. However, that finding does not rule out its use for other surgeries, particularly more painful spine surgeries.

According to a retrospective analysis of 187 patients undergoing minimally invasive diskectomy, decompression or laminectomy at a single institution, results showed no difference in intraoperative/postoperative opioid use or pain scores in patients receiving IV acetaminophen compared with those who did not receive the analgesic agent (Figures 1-4). 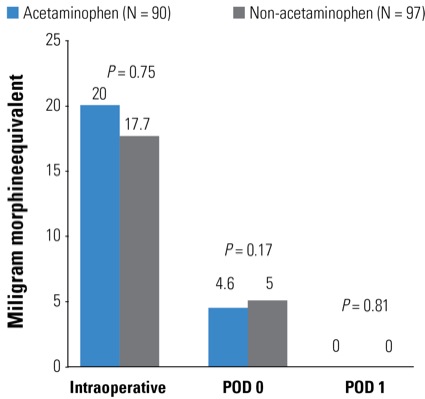 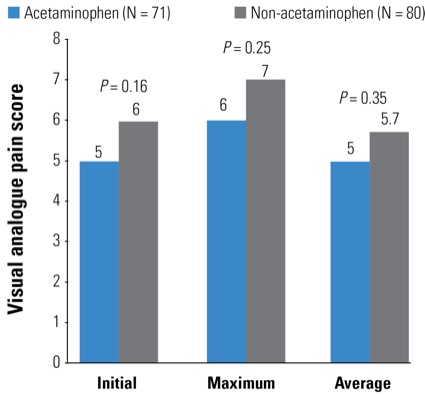 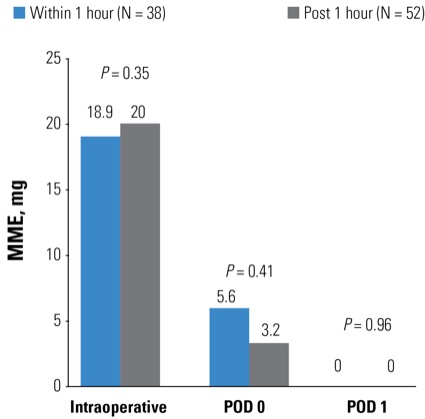 Figure 3. Opioid use in patients receiving acetaminophen within one hour of incision and more than one hour after incision.

Figure 4. Postoperative pain scores in patients receiving acetaminophen within one hour of incision and more than one hour after incision.
“Although previous literature supports the benefit of including multimodal analgesia as part of an intraoperative pain management plan, our results failed to identify a measurable effect of perioperative acetaminophen alone on opioid requirements or pain scores,” noted Eugenia Ayrian, MD, an associate professor of clinical anesthesiology and the chief of neurosurgical anesthesiology at Keck School of Medicine of the University of Southern California, in Los Angeles. “While intravenous acetaminophen may benefit a carefully selected subset of patients undergoing surgery, prospective carefully standardized studies need to be done to determine which patients will have the greatest benefit.”
As Dr. Ayrian explained, previous studies have demonstrated a rationale for the use of IV acetaminophen in multimodal analgesic regimens to reduce postoperative pain. In order to explore its effect in spine surgery, which is often accompanied by severe pain, Dr. Ayrian and her colleagues initiated a trial to prospectively randomized patients undergoing minimally invasive spinal fusion surgery who received 24-hour IV acetaminophen versus oral acetaminophen versus no acetaminophen.

However, due to the high cost of IV acetaminophen, a shortage of remifentanil and the disapproval of the research committee, the trial was stopped before completion.

Dr. Ayrian and her colleagues sought retrospective data from patients undergoing minimally invasive nonfusion procedures (diskectomy, decompression or laminectomy) to explore the effect of IV acetaminophen on intraoperative and postoperative opioid use and postoperative pain scores. The researchers compared the total dose of opioid administered during and after surgery (24 hours) in patients receiving and not receiving IV acetaminophen.

At the 2019 annual meeting of the American Society of Regional Anesthesia and Pain Medicine, lead author of the study, Marie LeClair, MD, an anesthesiology resident at the University of Southern California, reported data that showed no significant effect of IV acetaminophen on median opioid use or pain scores. Total intraoperative morphine milligram equivalents (MME) was 20 mg in the acetaminophen group versus 17.7 mg in patients not receiving acetaminophen (P=0.75), and total postoperative days 0 and 1 MME showed no significant difference between groups (P=0.17 and P=0.81, respectively).

The authors acknowledged several limitations with this retrospective study, including the lack of standardized analgesia. Despite the absence of effect on postoperative pain control, however, Dr. Ayrian reported that IV acetaminophen is still being used, albeit less frequently, at her institution.

“We used to give it to patients right away in the intraoperative setting, but because of the high cost, we decided to reserve IV acetaminophen for the recovery room,” Dr. Ayrian said. “Now, we no longer keep it in the cart, so if we want to give it to patients we have to request the pharmacy to release the medication. However, it is still used in post-anesthesia care after minimally invasive spine surgeries and any other types, especially for elderly patients that cannot take opioids.”

Zeeshan Sardar, MD, a spine surgeon at the NewYork-Presbyterian Och Spine Hospital, in New York City, told Anesthesiology News that the most effective use of IV acetaminophen is likely in patients undergoing spine surgeries that typically have a lot of postoperative pain associated with them.

“It is not surprising that IV acetaminophen did not show a benefit for patients undergoing minimally invasive diskectomy, decompression or laminectomy,” said Dr. Sardar, who noted that these surgeries are often performed as outpatient surgeries where patients stay less than 24 hours in the hospital after the procedure. “Since these patients tend to have low levels of pain, they end up using minimal amounts of opioid pain medications after the surgery. Therefore, adding additional pain medications such as IV acetaminophen doesn’t show an impact after these minor surgeries.

A.N. Shamie, MD, a professor and the chief of orthopedic spine surgery at David Geffen School of Medicine at UCLA, in Los Angeles, underscored the differences in the specific surgeries selected for analysis that may have accounted for the study’s negative outcomes.

“These are all very different patients,” said Dr. Shamie, who noted that a better definition of “minimally invasive” could have been provided, as well as the patients’ opioid needs before surgery. “Nevertheless, this study raises important questions in the field of pain management.

“Helping patients use less opioids is a valuable area of research,” Dr. Shamie concluded. “IV acetaminophen needs to be studied prospectively in a randomized, placebo-controlled trial, but we should limit the study patients to smaller surgeries and bigger surgeries and see if acetaminophen has a different effect on microdiskectomy versus laminectomy.”