The external validation of the model shows a compelling area under the receiver operating characteristics curve (AUC) of 0.95 for predicting hypotension 5 min before the event.  However, the corresponding receiver operating characteristics curve presented in the index publication’s figure 3 (reprinted and adapted here as fig. 1) looks highly improbable. This receiver operating characteristics curve presents the sensitivity (true predictions of hypotension out of all hypotensive events) and corresponding specificity (true predictions of nonhypotension out of all nonhypotensive events) for all possible thresholds (“alarm limits”) of Hypotension Prediction Index. The receiver operating characteristics curve in the index publication shows that a specific (yet unspecified in the publication) threshold is associated with a specificity of approximately 100% and a sensitivity greater than 60%.  When the specificity is 100%, there are no false predictions of hypotension. Therefore, the positive predictive value (true predictions of hypotension out of all predictions of hypotension) is also 100%. This means that Hypotension Prediction Index values above this threshold are always associated with future hypotension. We find it difficult to imagine that it is possible to predict with approximately 100% certainty that hypotension will occur while maintaining a reasonable sensitivity. Herein, based on the data selection described in the index publication and a computer simulation illustrating the consequence of that data selection, we present the hypothesis that the index publication and several reported validation studies of the Hypotension Prediction Index may contain a systemic statistical bias influencing its predictive abilities. 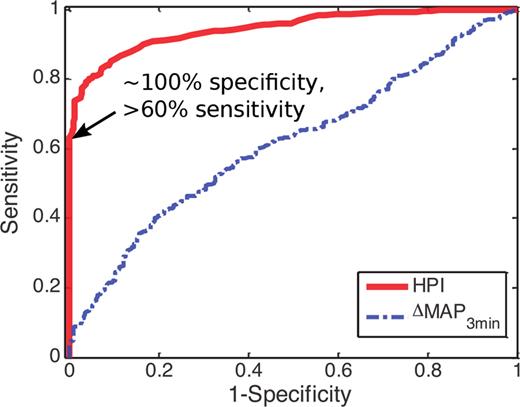 Data Selection May Be Biased

A probable explanation for the reported high specificity can be found in the methods section of the index publication: 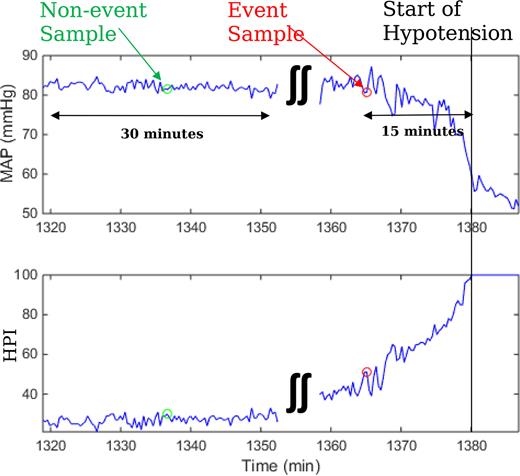 Illustration of the selection of hypotensive events and nonhypotensive events, and the samples corresponding to each type of event (reprinted from the model development paper’s supplementary fig. 2 ). A nonevent sample is the center of a 30-min section where all data points have a mean arterial pressure (MAP) greater than 75 mmHg. HPI, Hypotension Prediction Index.

The likely existence of a significant selection bias in the development and validation of the Hypotension Prediction Index is the key message of this discussion.

Visualization of the Selection Problem 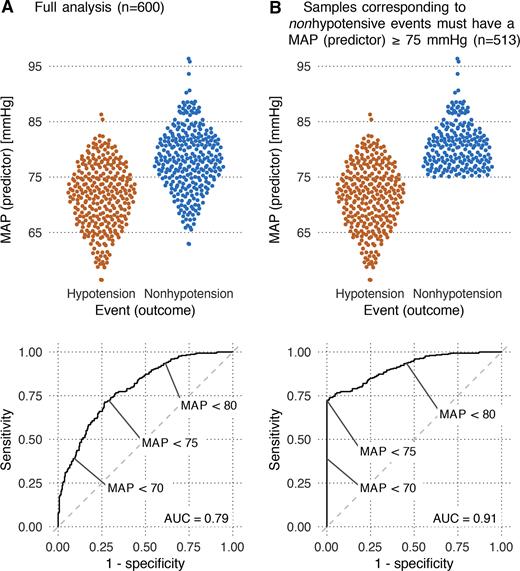 Hypotension Prediction Index Should Be Revalidated

A recent paper appropriately suggested that a complex and proprietary algorithm like the Hypotension Prediction Index should be compared to a simple model that represents current clinical practice (as opposed to ΔMAP).  The authors suggested a linear extrapolation from the current MAP value and the MAP value 1 min earlier (“LepMAP”). The study did not compare LepMAP and Hypotension Prediction Index directly, but when, in a secondary analysis (termed B-analysis), the authors applied a data selection to match that of the index publication, they found an AUC of 0.93 for LepMAP’s prediction of hypotension 2 min into the future, with receiver operating characteristics curves that were skewed toward high specificity. In the study’s A-analysis, which did not enforce the index publication’s selection, they compared the predictive ability of LepMAP to that of the concurrent MAP, and found that they were not statistically different, although the concurrent MAP’s AUC had higher point estimates. However, the paper does not address that the B-analysis creates a selection bias.

The Case–Control Design Itself Is Problematic

The process of representing clinical data as outcomes and predictors for a risk prediction problem has recently been introduced as the framing of the problem.  A clinically relevant framing for investigating the Hypotension Prediction Index’s ability to predict hypotension could be as follows: When the Hypotension Prediction Index gives an alarm, how often does hypotension actually occur, e.g., 3 to 10 min later (i.e., positive predictive value); and when hypotension occurs, was there an Hypotension Prediction Index alarm 3 to 10 min earlier (i.e., sensitivity)? This way, all false-positive predictions will be counted—not just the ones corresponding to selected “nonevents.” We acknowledge that it is not trivial to decide what constitutes a single prediction, and we do not contend that the suggested framing is the single best solution. In the end, it is the model developers’ responsibility to make sure that an algorithm is developed and validated to truly address the targeted clinical problem.