Nociception monitors are becoming more popular, but do they work? According to the results of a Dutch study, the answer is yes, at least for one model.

“As anesthesiologists we are well versed in nociception, which we measure in various ways every day,” said Albert Dahan, MD, PhD, a professor of anesthesiology at the institution. “However, these new monitors also measure nociception using the combo of several end points: heart rate, heart rate variability, the plethysmogram, skin conductance, skin conductance variability and their derivatives.”

Previously, the investigators performed a validation trial (Anesthesiology 2015;123[3]:524-534), where they examined the ability of a nociception monitor to detect autonomic signals. “We found the device to be a reliable measure of mild and severe nociceptive events,” Dr. Dahan said.

In the current study, the investigators sought to determine whether nociceptive monitoring—coupled with nociception-guided administration of opioids during surgery—would affect opioid use and hemodynamic stability in patients scheduled for elective major surgery under total IV anesthesia. The study used the Nociception Level Index (NOL) device (Medasense Biometrics, Israel), which displays values between 0 and 100; 0 is the absence of nociception and 100 represents maximal nociception. Note that the NOL device is not commercially available in the U.S.

“In our studies, we try to keep the level between 10 and 25,” Dr. Dahan explained. Values above 25 suggest increased nociception requiring supplemental opioid administration; those below 10 during surgical stimuli suggest opioid overdosing.

A total of 80 patients with ASA physical status levels I to III (aged 18-80 years) were enrolled in the study, all of whom were scheduled for major abdominal surgery under general anesthesia without epidural analgesia. Each participant received a standardized anesthetic regimen comprising remifentanil-propofol anesthesia using a target-controlled infusion (TCI) system. All patients received rocuronium and were antagonized with sugammadex (Bridion, Merck).

Patients were randomly assigned to receive either standard of care (n=40; 20 women; median age, 59 years) or nociception-guided analgesia (n=40; 16 women; median age, 59 years). In the nociception-guided group, TCI remifentanil was reduced when values fell below 10 and increased when they exceeded 25 for two minutes or more, in 0.5- to 1.0-ng/mL increments. In the standard of care group, TCI was left to the discretion of the attending anesthesiologist; propofol was titrated to bispectral index (BIS) values of 50±5. 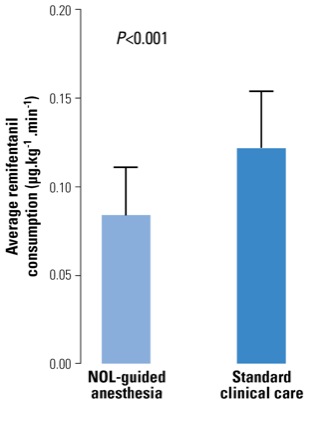 With respect to hemodynamic stability, hypotensive events (mean arterial pressure <55 mm Hg for one minute or more) were found to occur more frequently in the standard of care group (n=11; 28% of patients) than in the nociception-guided group (n=2; 5% of patients; P=0.01) (Figure 2). BIS values were comparable between treatment groups. 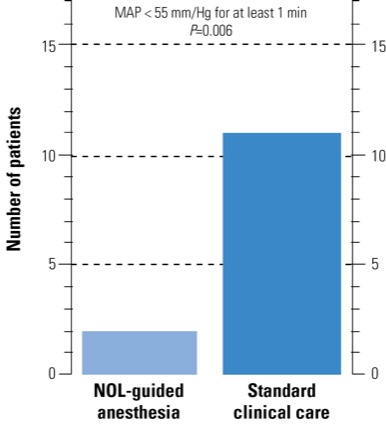 “When we looked at moderate hypotension, there was a big difference between groups in absolute terms, with far fewer hypotensive events in the NOL-guided group,” Dr. Dahan added. Propofol and rocuronium consumption were not different between treatment arms, he noted.

Although there were no observed differences between groups with respect to pain scores, the study was not designed to detect such distinctions. “As part of the study, we administered morphine approximately one hour before the end of surgery,” Dr. Dahan said. “So we really didn’t see a difference in postoperative pain levels because we were preemptive about it.”

These results help demonstrate the potential of such devices to affect intraoperative opioid consumption and hemodynamic stability in patients undergoing elective major surgery. “We showed that NOL-guided anesthesia caused a reduction in remifentanil consumption of more than 30%, plus a reduction in the number of inadequate anesthesia events,” Dr. Dahan said. “What’s more, nociceptive events were better controlled in the NOL-guided group.”