The National Institutes of Health (NIH) has made additional funds available to Invistics Corp., based in Atlanta, to make its software even more effective at detecting drug diversion in anesthesiology.

The company received its first NIH grant, a little more than $1 million, in 2017. The supplemental amount received last December and this July is a matching grant, for a total of over $2 million to date.

Dozens of U.S. hospitals currently use Invistics’ Flowlytics software to detect diversion in anesthesiology and other areas like nursing and pharmacy, according to the company’s founder and CEO, Tom Knight.

“Drug diversion in anesthesiology is a major problem and has been going on since the very beginning of the profession,” Knight said. “Our evidence indicates that drug diversion continues to grow in parallel with our nation’s opioid crisis.”

The software scans existing hospital data to detect when diversion occurs among employees or non-employee clinicians at the facility, including anesthesiologists, certified registered nurse anesthetists and surgical technicians with access to anesthetic agents.

“We are looking at data on what that employee or clinician entered into various systems, such as an electronic medical administration record (EMAR) during a surgery or some other procedure,” Knight said.

As an example, fentanyl is often stored in a locked automated dispensing cabinet (ADC) near the OR. At the start of a shift or case, the anesthesiologist is authorized to remove a given number of vials of the drug, which is tracked by the hospital. The amount of fentanyl administered in the OR also is recorded, in the EMAR. The remaining amount in the vial (often referred to as “waste”), however, often is the target of theft through pocketing the vial instead of returning it to the original ADC, where the vial is entered into the system.

“It is very common for anesthesiologists to steal the waste because they are typically using that narcotic, even addicted to it,” Knight said. “They might need fentanyl to avoid withdrawal or they have a substance use disorder. On occasion, they might be selling the waste for profit or other benefits.” A person can pocket narcotics for years without being caught, Knight noted.

Invistics software pulls the data that were entered in both places, the ADC and the EMAR (Figure). “We can calculate that there should have been waste, but no waste was reported,” Knight said. 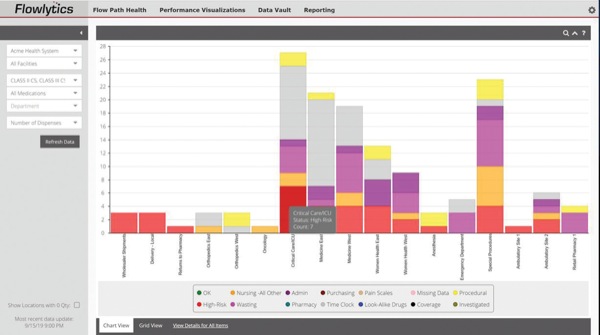 Most anesthesiologists who steal narcotics, however, use a more sophisticated method—falsifying records. “Not only can our software detect clear errors in the documentation, but it can detect falsification of the documentation,” Knight said.

One routine way to falsify records occurs at the end of a case, before the patient leaves the OR. Instead of the waste being pocketed and undocumented by the anesthesiologist, he will still put the waste in his pocket and then claim to have administered that amount to the patient.

“Our software is really good at detecting that pattern because there is no reason that you would give a patient that much of the medication one minute or two minutes after the procedure is completed,” Knight said. “The software can look for suspicious patterns of administration over the course of the procedure.”

The software is also helpful in comparing an individual anesthesiologist’s drug quantity per kilogram of patient weight with that given by other anesthesiologists performing a similar surgical procedure.

Part of the additional NIH funding will be earmarked toward identifying drug diversion in the PACU, for which the software can detect patterns in a patient’s pain scale. “The pain scale reading may not be appropriate for the amount of medication the patient has been administered,” Knight said. “For example, if I’m stealing and not giving my patient the pain medication, she is going to wake up in incredible pain in the PACU.”

The software can be accessed on a computer, smartphone or tablet, displaying a dashboard that indicates if an anesthesiologist may be diverting. “The color and the size of the box become redder and larger as the software becomes more confident it has caught someone diverting drugs,” Knight said.

Hospital diversion investigators use the software to know when they should investigate diversion. “But everyone is assumed innocent until evidence is collected,” Knight said. If the anesthesiologist is found to have been stealing the medication, either because they admitted to the theft or an adjudication process concludes theft occurred, the goal is to provide help so the person can begin recovery.

“Unfortunately, in anesthesiology, it is not a high percentage who admit guilt, unlike nursing,” Knight said. “Because anesthesiologists have invested decades in their education and are in a very prestigious and high-paying job, admitting that they may be addicted to the medications that they handle every day could result in them losing their job, damage their reputation and even lead to jail time.”

Knight said anesthesiologists have also been trained how to handle very strong and addictive narcotics, hence they believe they are immune to their addictive and dangerous effects.

“Our additional funding will allow us to improve the accuracy of our detection in anesthesiology, so that we are able to detect diversion sooner and detect diversion that would have otherwise gone undetected,” Knight said. “The National Institute on Drug Abuse also considers our software as a groundbreaking method to prevent diversion from occurring, and hopefully deter people from ever starting.”