Continue BMV between attempts, call for help and remember each attempt mandates a different approach.

1. If SpO2 permits allow a maximum of 3 attempts.

2. For direct or Macintosh videolaryngoscopy optimize

3. If there is hold up at the glottic inlet when using a bougie, rotate ETT counterclockwise.

4. For hyperangulated videolaryngoscopy, pull back if glottis is occupying more than the screen’s upper half.

5. Manage hold up after the glottic inlet with partial retraction of stylet (~ 3cm) and/or rotation of ETT clockwise.

If BMV fails at any point move to failed oxygenation protocol:

Continue BMV between attempts, call for help and remember each attempt mandates a different approach.

Failed intubation is an emergency mandating action, but as long as the patient can be oxygenated there is time. Failed oxygenation is a crisis mandating immediate action and there is time pressure.

The number of laryngoscopy and intubation attempts is associated with an increase in morbidity and mortality. Three attempts is a suggested limit. However, it may be appropriate to abort attempts earlier (<3 attempts) based on predicted likelihood of success or patient condition.

Placement of a polyvinyl tube does not define success so don’t persist. The goal of airway management is to maintain end organ oxygen delivery whether it be by BVM (bag valve mask), SGA (supraglottic airway), ETT (endotracheal tube) or ESA (emegency surgical airway).

The method of intubation should be based on the skill set of the clinician, predicted difficulty, and availability of equipment. Regardless of the plan A device choice, the clinician must be equally skilled with their plan B device option. 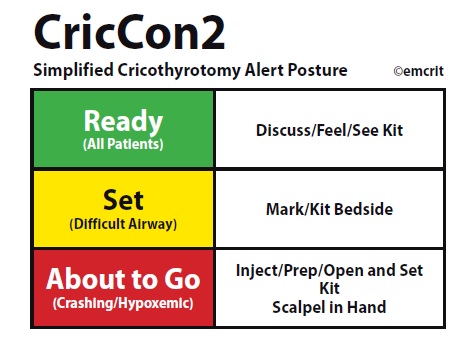 For all patients rescue oxygenation equipment should be chosen and within reach, the neck assessed for landmarks and procedure roles assigned (CricCon2 green).

For high risk patients equipment should be out of packaging, the neck landmarks marked and the decision to act defined and communicated (CricCon2 yellow).

For the crashing patient a single primary supraglottic approach can be attempted with emergency surgical airway (ESA) in assigned clinician’s hands (CricCon2 red).

While reversal of neuromuscular blockade with sugammadex is rapid (~4 min to 90% TOF) critically ill patients in a failed oxygenation scenario are not likely to return to their already compromised preintubation state. A partially awake patient may make rescue conditions even more difficult.