Sugammadex is a synthetic cyclodextrin derivative that encapsulates aminosteroid muscle relaxants, especially rocuronium, to reverse their effect. Sugammadex (Bridion®, Merck Sharp & Dohme B.V., a subsidiary of Merck & Co., Inc.) was first released in the European Union in 2008 and then in Japan in April 2010. Sugammadex has been widely used since its release in Japan. Total sales of sugammadex in Japan reached $51,880,000 in 2010, more than four times that in Spain ($11,376,000), which was second in sales worldwide (data obtained from MSD K.K. (a subsidiary of Merck & Co., Inc.).1Sugammadex use in Japan has continued to grow with a total of 11,053,680 vials sold over the seven years since its release (© 2018 IQVIA/IMS-JPN (Japan) JPM (Japan Pharmaceutical Market), calculation based on JPM from April 2010 to June 2017 (reprinted with permission). It is not possible to accurately count the number of patients who have received sugammadex because multiple vials may be used on a single patient. Assuming that only one vial was used in most cases, sugammadex was administered to approximately 10% of the total Japanese population during the eight-year period since its release. Atvagoreverse® (a mixture of neostigmine and atropine) was used to reverse the effects of muscle relaxants in Japan before the release of sugammadex. The incidence of neostigmine is not exactly elucidated in the literature. However, there are only a few isolated case reports despite decades of its routine use to reverse neuromuscular blockade. While a dose of Atvagoreverse® (6 ml) costs about $6 US Dollars, a 200 mg dose of sugammadex costs about $90. Despite this enormous difference in price, sugammadex has rapidly become popular due to its reliability in reversing the effects of aminosteroid muscle relaxants. Other contributing factors for its wide use in Japan include unique features of Japan’s nationwide health insurance system that substantially reduces the patient’s financial burden and the aggressive promotion by the local pharmaceutical company. Consequently, many Japanese anesthesia professionals are unlikely to consider price when they select drugs to use during anesthesia.There have been several reports on anaphylaxis caused by sugammadex in Japan.1-4According to the adverse events database of the Japanese Pharmaceuticals and Medical Devices Agency (PMDA—an agency similar to the Food and Drug Administration that handles pharmaceuticals and medical devices), 284 cases of sugammadex-induced anaphylaxis were reported between April 2010 and June 2017. Of these cases, 268 cases were reported by MSD, while the remaining 16 cases were reported directly by medical institutions. In accordance with government regulations, all the cases reported by MSD were critical, while the cases reported directly by medical institutions included noncritical cases. Of the total 284 cases, there were 157 cases reported as anaphylactic shock, 88 cases reported as an anaphylactic reaction, 4 cases reported as anaphylactoid shock, and 35 cases as an anaphylactoid reaction. The variety of names used to describe allergic reactions in the reports are likely due to variations in the definition of anaphylaxis in Japan. In the past, allergic events involving IgE were called anaphylaxis, while those not involving IgE were called anaphylactoid reactions. The use of the term “anaphylactoid reaction” is no longer recommended.5Based on the number of PMDA reported cases and total number of doses sold, the incidence of sugammadex-induced anaphylaxis is estimated to be approximately 1 in 40,000 cases (0.0025%). 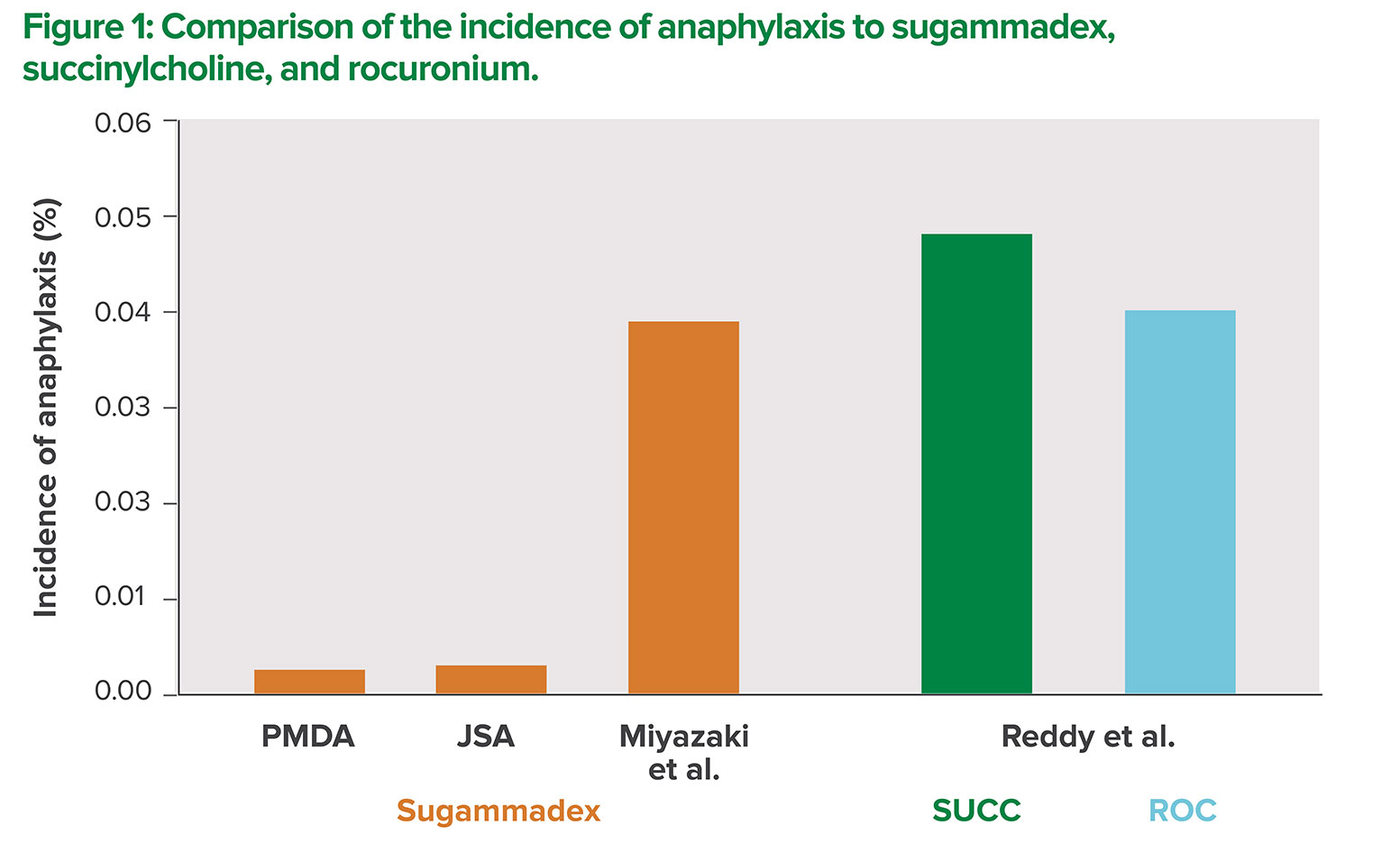 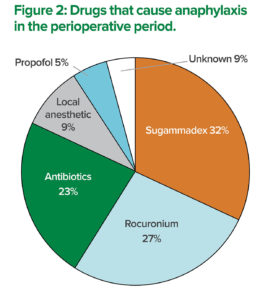 The total percentage exceeds 100%, because a patient with multiple causative agents was included.