“In the past, gender bias has been a potential issue that has affected how medical students, residents and fellows are evaluated, trained and provided feedback as well,” said Mallory E. Bugel, MD, a clinical assistant professor of anesthesiology at the University of Pittsburgh Medical Center. “Some studies have shown that female trainees have received more critical feedback than their male counterparts, are graded differently, and are actually provided less independence in their training than their male counterparts.

To elucidate this relationship, the investigators turned to a 360-degree tool used at their institution as part of its pediatric anesthesiology fellowship evaluations. There, fellows are evaluated using a 9-point Likert scale (1=unsatisfactory; 9=superior) by PACU nurses, preoperative nurse practitioners, anesthesia technicians, administrative staff and other fellows.

The trainees are rated on qualities related to professionalism and communication, not patient care or medical knowledge. The tool also tracks the sex of the evaluator.

As Dr. Bugel reported at the 2018 annual meeting of the American Society of Anesthesiologists (abstract A3095), average global scores were higher for women than men from both female and male evaluators. The global score from male evaluators was higher for female fellows, but this was of borderline significance (P=0.05) (Table).

The global score for each fellow was broken down into seven competencies: 1) communicates clearly, 2) respect for others, 3) kindness, 4) completes responsibilities, 5) knows limits of abilities, 6) accepts responsibility, and 7) patient advocacy (Figure). When graded by female evaluators, female fellows had higher scores than their male counterparts on patient advocacy (8.55 vs. 8.27; P=0.046) and knowing limits of abilities (8.66 vs. 8.37; P=0.019). 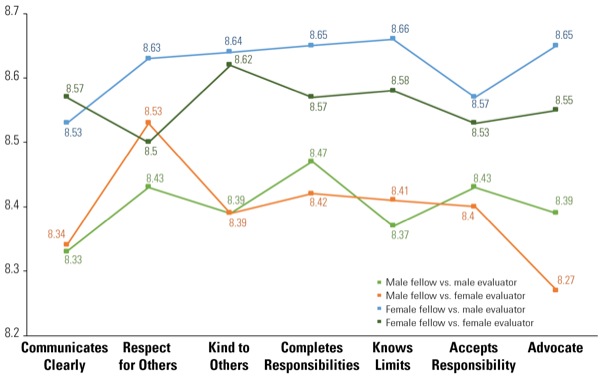 Figure. Scores for male and female fellows across 7 domains.

“While not all individual competency scores were statistically significantly higher for females than males, they certainly seemed to trend that way,” Dr. Bugel said.

Although these results are limited to one institution using one tool, the researchers nevertheless were encouraged by their findings, which suggest that gender bias may not be as prevalent as thought in this specific population.

“It’s interesting because this is not the hypothesis we would have come up with,” Dr. Bugel said. “It was actually the opposite of what we thought would happen.

“Gender can have a significant impact with respect to how people are trained and provided feedback,” she added. “However, in the data that we reviewed, it seemed that female fellows were actually ranked higher than their male counterparts among several qualities we examined.

“In the future, we plan on performing more assessments to see if this trend continues,” Dr. Bugel said.

For Amy Pearson, MD, an assistant professor of anesthesia at University of Iowa Health Care, in Iowa City, the study offered a refreshing twist on typical sex-based research. “While most studies of gender bias in trainee evaluations focus on evaluations of residents by faculty, this study is interesting in that it focuses on evaluations of fellows by other health professionals.

“Women scored higher than men on communal traits such as kindness and knowing limitations,” Dr. Pearson added. “It would be interesting to see if this trend remained for more agentic traits, such as decisiveness, self-assertiveness and independence.”