There does not appear to be a significant association between induction method and serious perioperative respiratory adverse events (PRAEs) in a large cohort of overweight children with sleep-disordered breathing (SDB) following general anesthesia.

Many of the risk factors for serious PRAEs are not readily modifiable—including the finding of asthma, SDB, a recent urinary tract infection or obesity—unlike the choice of induction.

“PRAEs are common, but fortunately, many are easily managed by trained pediatric anesthesiologists,” said Olubukola Olugbenga Nafiu, MD, an associate professor in the Department of Anesthesiology at University of Michigan Hospitals–Michigan Medicine, in Ann Arbor, who presented the findings at the 2019 annual meeting of the Society for Pediatric Anesthesiology/American Academy of Pediatrics. “Several risk factors have been identified.”

Given that the prevalence of overweight, obesity and SDB in the pediatric surgical population are rising—as well as the fact that many practitioners prefer the use of an endotracheal tube for managing the airway of obese children during anesthesia—the study authors hypothesized that IV induction would be associated with lower odds of serious PRAEs in the study population. 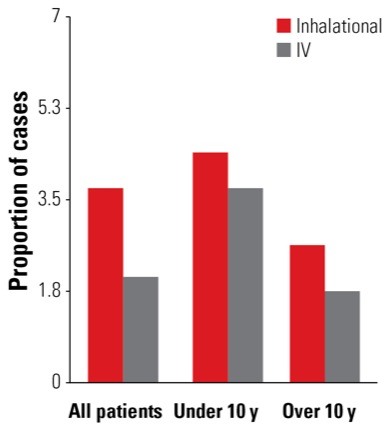 “Since choice of induction is a modifiable risk factor,” said Dr. Nafiu, “our goal was to determine whether use of inhalational or IV induction would make a difference to the occurrence of serious PRAE (i.e., laryngospasm and bronchospasm) among overweight/obese children, a group known to be at risk for PRAE.”

Dr. Nafiu and his colleagues studied a retrospective cohort of 2,110 children aged 2 to 17 years who had a body mass index greater than the 85th percentile for age and sex. Additionally, patients had a history consistent with SDB: habitual snoring or a diagnosis of obstructive sleep apnea.

Patients underwent general anesthesia with an endotracheal tube for various elective non-otolaryngological procedures between 2007 and 2014. The researchers noted the method of induction for general anesthesia, and tracked rates of serious PRAEs.

The team found that serious PRAEs occurred in 2.6% of patients. “On univariate analysis, inhalational induction appeared to be advantageous,” Dr. Nafiu said (Figure). “However, once patients were stratified into age groups, the induction technique was no longer a significant factor,” a finding that Dr. Nafiu noted contradicts previous findings.

Upon multivariate logistic regression analyses, decreasing age, bronchial asthma and increasing duration of surgery were found to be independent predictors of severe PRAEs.

However, induction technique was not, a result that Dr. Nafiu said requires future prospective studies for further investigation.