A 49-year-old, 95-kg man presented for a total thyroidectomy and radical neck dissection due to a cancerous goiter. His medical history was significant for hypertension treated with beta-blockers, and type 2 diabetes mellitus. General anesthesia was induced with fentanyl, propofol, and succinylcholine. Endotracheal intubation was successfully performed with a 7.0 endotracheal tube (ETT) with embedded laryngeal surface electrodes for intraoperative neuromonitoring (IONM) of the recurrent laryngeal nerve. Neuromuscular blocking agents were avoided during maintenance of anesthesia to enable adequate IONM. 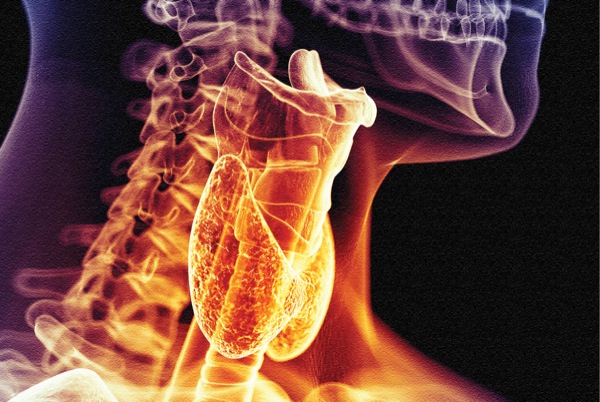 The surgery and anesthesia were uneventful, and the patient was successfully extubated. Ten minutes after arrival to the PACU, the patient developed dyspnea, stridor, decreased oxygen saturation to 85%, and a rapidly progressing right neck hematoma.

The surgical stitches were opened to evacuate the hematoma at bedside, and the patient was rapidly transferred to the OR in a head-up position. He remained hemodynamically stable. Two milligrams of midazolam and 50 mcg of remifentanil bolus were administered for sedation, and endotracheal intubation was performed under awake video laryngoscopy using a GlideScope (Verathon). The bleeding was stopped and the hematoma evacuated. At the end of the procedure, a 14 Fr Cook Medical Airway Exchange Catheter (AEC) was inserted 22 cm through the ETT, and the ETT was removed. The AEC was successfully removed after 60 minutes with no further complications.

Cervical hematomas are a rare post-thyroidectomy and parathyroidectomy complication, with a reported incidence of 0.4% to 0.7%.1,2 In addition to neck swelling and ecchymosis, patients may present with respiratory distress, stridor, severe neck pain, and dysphagia. Coughing/straining and hypertension at extubation may contribute to the development of postoperative neck hematomas. Examples of strategies to attenuate hemodynamic responses and coughing/straining at extubation include:

Surgical factors associated with an increased risk for post-thyroidectomy neck hematomas include male gender, age older than 45 years, black race, bleeding disorders, inflammatory thyroid disease, thyroid malignancy, partial thyroidectomy, history of thyroid surgery, and a dominant nodule greater than 3 cm.2,9,10 According to Lang et al,2 73% of neck hematomas developed within 6 hours of surgery, and 27% between 6 and 24 hours after surgery. Emergency surgical evacuation and surgical exploration are required in cases of rapidly growing hematomas and suspected arterial bleeding. Airway impairment may result from soft tissue swelling compressing the trachea. If possible, awake intubation with maintenance of spontaneous breathing is preferred. To avoid further airway compromise, the surgical stitches should be opened to decompress the hematoma before intubation.

Recurrent laryngeal nerve (RLN) injury is one of the major post-thyroidectomy complications, with a reported incidence of 0% to 11%.12 The injury can be transient or permanent, unilateral or bilateral, with paresis or paralysis of the RLN. Unilateral RLN injury can cause hoarseness, dysphonia, and dysphagia. Bilateral RLN is a very rare complication with a reported incidence of 0.4%, presenting with inspiratory stridor and dyspnea after extubation and requiring prompt reintubation.13

IONM is frequently used to monitor the RLN during surgery; however, the efficacy of this technique for avoiding RLN injury is controversial.14 Lynch and Parameswaran15 reviewed various methods of managing an RLN injury. Voice therapy showed some benefit to vocal fold motility and successful glottal closure, but the results were inconclusive due to a lack of controls. Laryngoplasty aimed at medializing the vocal cords is considered the gold standard for permanent vocal cord paresis or paralysis. This is best used in patients with major symptoms (eg, dysphonia, dysphagia) and greater than 2 mm of glottic insufficiency on phonation, as lesser symptoms mark a patient as a better candidate for injection or speech therapy.

Arytenoid adduction surgery, which is accomplished via suturing traction of the arytenoid cartilage, is an irreversible treatment that is often combined with laryngoplasty, presenting a higher rate of complications. The more recent cricothyroid subluxation procedure, which lengthens the affected cord and is performed along with laryngoplasty, has insufficient evidence for efficacy. Finally, there are various methods of reinnervation, with or without grafting, that show broadly positive outcomes in case series but are without large data sets.Tracheomalacia

Tracheomalacia is a very rare post-thyroidectomy complication. Long-standing tracheal compression by a large goiter can, however, lead to tracheal ring softening or destruction, with a reduction of the tracheal cross-sectional area to 50% and consequent tracheal collapse after thyroidectomy, requiring tracheostomy.16

Hypocalcemia is a frequent complication after thyroidectomy due to damage to the parathyroid glands or blood supply to the parathyroid glands. The reported incidence of transient and permanent post-thyroidectomy hypocalcemia is 27% and 1%, respectively.17 Risk factors for developing post-thyroidectomy hypocalcemia include thyroid cancer, Graves’ disease, total thyroidectomy, neck dissection, and low-volume surgeons.17-19 Treatment with 1 g of 10% calcium gluconate infused over 20 minutes (and transitioned to oral calcium) is necessary in symptomatic patients and those with corrected serum calcium concentrations less than 7.5 mg/dL.18 Common clinical signs of acute hypocalcemia include perioral paresthesias, muscle spasm (particularly carpopedal spasm), hyperventilation, diaphoresis, laryngospasm, bronchospasm, seizures, and hypotension. QT interval elongation can be detected on ECG.

Michael Goldenberg is a medical student at Penn State College of Medicine, in Hershey, Pennsylvania; Dr Vaida is a professor of anesthesiology and perioperative medicine, and obstetrics and gynecology; the vice chair of research; and the director of obstetric anesthesia at Penn State Health Milton S. Hershey Medical Center, in Hershey, Pennsylvania.

The author and reviewer reported no relevant financial disclosures.