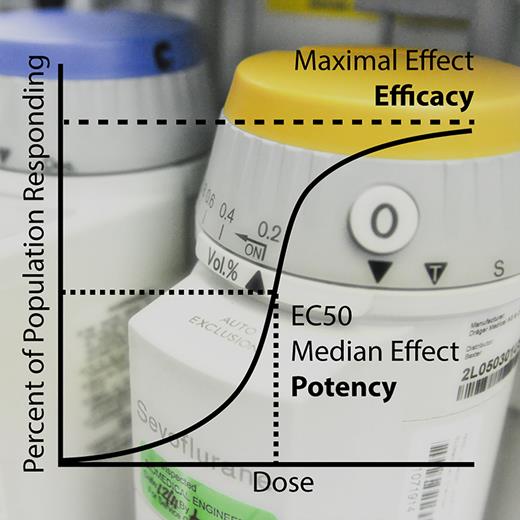 Anesthesiology is a specialty grounded in basic and clinical pharmacology. These domains have concepts and vocabularies that are useful to scientists and clinicians, in their understanding and application of pharmacology. Potency (drug dose or concentration producing a given effect) and efficacy (maximum drug effect) are two concepts that ground pharmacology. One of the venerated concepts and terms in anesthesiology is “MAC.” MAC is a nom de plume for potency and EC50 (vide infra). Among the entire pharmacologic armamentarium, inhaled anesthetics are the only drugs for which potency has a special name, and inhaled anesthetics are the only ones in anesthesiology—indeed in all of medicine—that are dosed as a fraction of their EC50. As we celebrate the 60th anniversary of MAC, it is useful to examine what it means and what it stands for.

Last month in Anesthesiology, Dr. Larry Saidman, former Editor-in-Chief of Anesthesiology, recounted in a Classic Papers Revisited article  his role in the first study to determine MAC in humans.  He and Dr. Edmond “Ted” Eger II anesthetized 68 surgical patients with halothane to produce a light plane of surgical anesthesia, recorded the end-tidal halothane concentration, and observed whether the patients showed a muscular response to surgical incision. The halothane concentration at which half the patients responded with movement and half did not (the “transition point”) was termed the MAC.  As described by Dr. Saidman, “The discovery of MAC in humans was revolutionary for clinical and research purposes in that it allowed the pharmacologic effects of inhaled anesthetics to be compared against each other at a similar anesthetic depth.” Classic pharmacology.

This month in Anesthesiology, Drs. Jan F. A. Hendrickx and Andre M. De Wolf explicate the foundations of MAC, the underlying physiology and pharmacology, the clinical application, and the terminology in a Clinical Focus Review. They explore definitions and determination of MAC, types of MAC (MACawake, MACunconsciousness, MACimmobility, MACBAR), factors affecting MAC, fraction of a MAC delivered to a patient (fMAC), relationship between fMAC and clinical effect, and drug interactions or other factors affecting fMAC. They also present pragmatic approaches to using MAC and fMAC in clinical care. This comprehensive and lucidly written review provides both text and illustrations to visualize and reinforce the concepts. It is recommended to trainees as well as experienced clinicians.

Astute readers will detect that while this essay has described MAC, it has not yet defined it. For this, we need a bit of pharmacologic grounding (fig. 1). There are two types of dose (or concentration)–response curves. Graded dose-response curves describe drug response along a continuous scale (0 to 100% of maximal response—termed efficacy) in a single unit (e.g., cell, organ, animal, or human). Quantal or population dose-response curves describe the fraction of a population of units responding with an all-or-none response (e.g., awake or not). The amount of drug needed to produce 50% of a maximum effect in one unit is the ED50 or EC50. The amount of drug needed to produce a quantal response in 50% of a population is the ED50 or EC50 (also known as the median dose or concentration). Both EC50 and EC50 describe drug potency (amount of drug needed for half-maximum effect), but they are clearly determined in very different ways. Now, back to MAC.

Drs. Hendrickx and De Wolf identify that the term “MAC” is thus plagued with semantic issues.  Should the “M” in MAC refer to “minimal” or “median”? In addition, while alveolar and end-tidal terms have been used interchangeably, they also point out that alveolar and end-tidal anesthetic concentrations (what we actually measure) may not be the same. They propose that MAC should be redefined (“backronymed”) as the “median alveolar concentration.” Excellent suggestion. Or even more precisely, perhaps should it be redefined as the “median end-tidal anesthetic concentration”: METAC? They also ask whether the acronym “MAC” should be abandoned altogether and replaced with the more universal EC50, because EC50 is conceptually and semantically more correct and aligns volatile anesthetic terminology with that of intravenous anesthetics and all other drugs. They suggest that MAC should not be abandoned, largely for practical reasons. This is because MAC describes anesthetic potency in a unifying manner across different anesthetics, allows the same anesthetic machine alarm limit (fraction of a MAC) to be applied to all volatile anesthetics, and is already hard-wired into anesthesia machine displays. Good point. Moreover, the use of MAC may contribute to patient safety.