The Doctors Company has studied anesthesia medical malpractice claims (written demands for payment) since 2007. Our first study involved 640 claims that closed from 2007–2012 and was published in the Journal for Healthcare Risk Management in 2014.

In June 2019, we repeated the study for 587 claims that closed between 2013–2018. The goals for these parallel studies were to determine whether the number of patient injuries had decreased and to identify any new trends in claims involving anesthesia care.

We segregated claims alleging tooth damage (272 claims) and reviewed them separately. Rates of claims and costs of claims (indemnity and expense) were compared between time periods for all anesthesiology claims. Pain medicine claims were also excluded from these studies.

Anesthesiology has led other specialties in reducing the risk of harm to patients since the mid-1980s, when the Anesthesia Patient Safety Foundation (APSF) was founded. Since then, clinical practice guidelines have been published by APSF and the American Society of Anesthesiologists (ASA), which have standardized some aspects of anesthesia practice.

When compared to the reduction in the number of claims filed per 100 FTEs in other specialties, the percent reduction for anesthesiologists was very small. Even if we associate fewer claims with fewer patient injuries, the best that can be said is that there has been only slight improvement.

Anesthesiology median indemnity was 19th out of 25 clinical services between 2013 and 2018.

Tooth damage claims continue to make up almost a quarter of all anesthesiology claims (22 to 23 percent). Although tooth damage claims are less expensive than most other types of anesthesia-related injuries, their processing and handling costs can impact the cost of medical malpractice insurance.

Tooth damage claims as a percentage of all anesthesiology claims:

of all anesthesia claims

of all anesthesia claims

Tooth damage claims are ubiquitous in situations where intubation is necessary. The numbers captured in our system are not fully representative of all tooth damage claims experienced by the physicians and organizations insured by The Doctors Company. Some groups and organizations choose to adjudicate these claims without submitting them to their professional liability insurance company.

Some patients have anatomy that creates challenges to intubation and other patients have poor dentition. It is essential to evaluate patients preoperatively to determine their dental condition and airway challenges. Plan for airway techniques least likely to damage teeth at risk. In cases of short neck, overbite, limited neck extension, and other anatomical challenges, anesthesia professionals can take precautions against tooth damage. In case of poor dentition and severe gum recession, patients need to be aware of risks to their teeth.

Factors that Contributed to Tooth Damage

The other primary factor determining the outcome of these cases was documentation (13 percent). The two areas of inadequate documentation were lack of descriptive preoperative clinical findings related to dentition, airway, and anatomy and informed consent listing tooth damage as a risk.

According to claims specialists, defense of tooth damage claims is more likely to be successful when anesthesia professionals document the preoperative condition of patients’ dentition, record descriptions of airways, and choose an appropriate intubation process.Anesthesiology Claims Excluding Cases with Tooth Damage

In cases excluding tooth damage, mean indemnity and expense increased by 12.5 percent and 36.0 percent respectively between the two time periods included in this study.

Median indemnity did not increase when the two time periods were compared. However, median costs for defense (expense) of anesthesiology claims increased by 37.1 percent.

When tracked by year, trend lines for mean and median indemnity and expense have increased over time.

Mean Indemnity and Expense for Anesthesiology Claims by Year

Median Indemnity and Expense for Anesthesiology Paid Claims by Year

The trend for more expensive anesthesia claims and suits continues. In 2009, only 19 percent of claims resulted in payment greater than $500,000, but by 2018, this category rose to 36 percent of anesthesiology claims. Most anesthesiology claims remain in the $1 to $499,000 range but the percentage of claims in this category decreased over the last 12 years, from 81 percent in 2009 to 64 percent in 2018.

The second study found the same types of injuries and at the same percentage of claims as in the first study. Along with a slight decrease in the frequency of anesthesiology claims, it appears that even with the introduction of new technology in recent years, the safety of anesthesia care has not changed in more than a decade. Maybe technology is not the only area where improvements can be made.

Note that the number differences may not be statistically significant. Also, patients may suffer more than one injury so the total is greater than 100 percent.

Across anesthesia claims (excluding tooth damage claims) there was not much change in the percentage of claims where these comorbidities impacted the patients’ clinical results. The greatest increase was seen in hypertension, from 3 percent in the earlier study to 9 percent in the 2013–2018 study.

However, there was a sizable impact of comorbidities—patients who suffered harm as a result of improper anesthesia management during surgery—when compared to all other anesthesia claims. 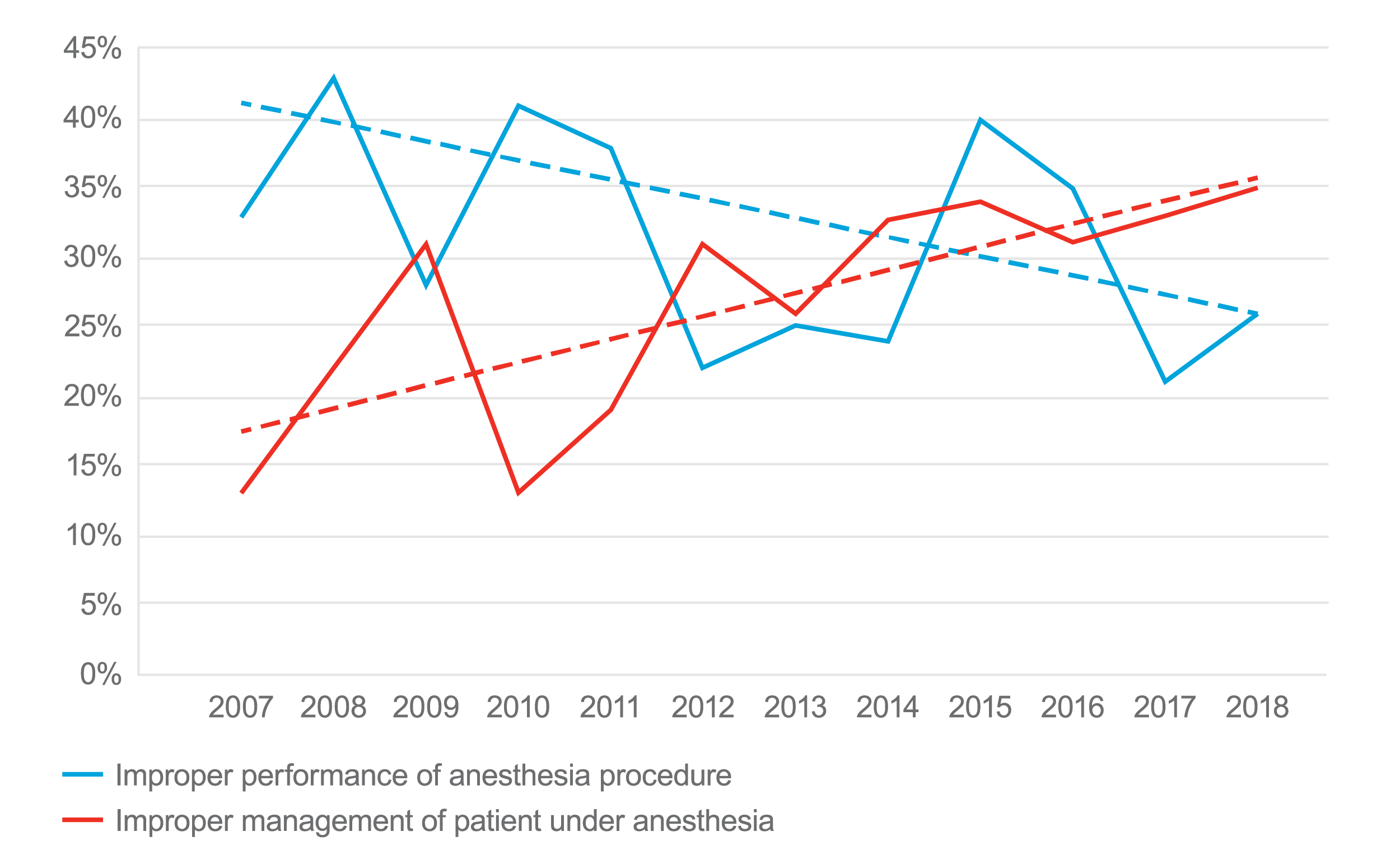 Twenty-four other case types made up the remaining 37 percent and 35 percent of anesthesiology claims in these two time periods.

Claims identified as improper management of patient under anesthesia were due primarily to respiratory, central nervous system, and cardiac complications. These complications were due to comorbidities that were present before the patient was taken to surgery.

Claims of this case type, with inadequate history and physical as a contributing factor, averaged more than two comorbidities per patient. In these cases, 67 percent of the patients had at least one comorbidity. This was two times higher than the percentage of claims with a comorbidity for the rest of the anesthesia cases where only about a third of cases had a comorbidity that impacted the outcome of care.

In claims of improper management of patient under anesthesia with inadequate history and physical as a contributing factor, obesity impacted patients’ care in almost three times as many cases as other anesthesia cases. Obstructive sleep apnea was six times more likely to impact the outcome. Hypertension was three times more likely to impact patient’s surgical results. The other comorbidities impacted care outcomes more than twice as frequently.

In these cases, anesthesia providers were managing conditions unrelated to the purpose of surgery but that ultimately were the cause of the patient harm. It appears that many patients were not healthy before surgery started.

A review of these cases revealed limited opportunities to conduct preoperative assessments. Older and sicker patients needed closer investigation but production pressures often limited testing and input from attending or referral physicians. These pressures also limited anesthesia professionals’ opportunities to recommend safer locations for anesthesia care (e.g., hospital operating room vs. ambulatory surgery or GI or cardiac labs) or to prepare for complications that might occur as a result of multiple comorbidities or complicated health histories.

This highlights the potential for harm in patients with comorbidities and who may not have had adequate history and physical examinations prior to surgery. This data raised the following questions:

Patients may suffer from a wide variety of comorbidities. Some may not be discovered without a thorough history and physical including family history of cardiovascular disease, respiratory conditions, allergies or bleeding disorders.

This also referred to the types of anesthesia and the routes of anesthesia that were selected for these patients. Reviewers pointed to patients’ conditions or comorbidities that should have prompted anesthesia professionals to consider other options.

Almost all factors related to patient monitoring were for inadequate monitoring of patients’ physiological status. Low mean arterial pressure and severe acidosis resulted in blindness. A drop in end-tidal CO2, likely due to an airway obstruction, was not noted and resulted in encephalopathy and death. Lack of documentation of breath sounds and slow response to drop in CO2 and heart arrhythmia resulted in anoxic brain injury. A patient’s oxygen levels dropped rapidly, and the low pulse oximeter readings were assumed to be due to equipment malfunction. It was later discovered that breathing circuit tubes had disconnected.

In the most recent study, improper performance of anesthesia procedure was the second most common case type, accounting for 27 percent of anesthesia claims. The factor identified most frequently by physician experts as having contributed to patient injury was technical problems that were known risks of the procedure (88 percent of the cases of this type). In these cases, patients were aware of the risks prior to surgery. Only 11 percent of these cases were due to poor technique.

Injection of anesthesia into a peripheral nerve or peripheral nerve blocks sometimes resulted in nerve damage from inadvertent injection into nerves. The frequency of these cases has decreased in recent years due to the use of ultrasound-guided needle placement. In a few of these cases, it was speculated that the injury came from the tourniquet. As with all cases, lack of or inadequate documentation (18 percent) may have impacted the quality of care and later, the ability of anesthesiologists to defend the care that they provided.

The following strategies can assist physicians and other providers in reducing risk and improving quality of care:

Rare situations don’t require extensive discussion since anesthesia professionals know how to provide high-quality care. However, the following circumstances from case reviews may be instructive, so they are included here:

The purpose of this study is to identify those rare circumstances that result in patient harm. Although anesthesia professionals provide excellent care for almost every patient, there is value in seeing those situations where circumstances prevented good care.Our hope is that this summary of data that arose from medical malpractice claims will serve as a reminder that excellent clinicians can find themselves in situations where they are fighting to save patients’ lives. This data shows that comorbidities can complicate the delivery of good anesthesia care. It reinforces the importance of thorough histories and physicals as a way of identifying potential problems and preparing to address them in the administration of anesthesia care.