In anesthesia practice, “during the late 1970s and early 1980s, the precordial stethoscope was the only useful continuous patient monitor.”1

Upon entering an anesthesia training program, residents were given a custom-molded earpiece that they wore everywhere, proudly pinned to their scrub tops. Then, in the mid-1980s, monitoring standards began to be officially recognized, with emphasis on ever-improving electronic monitors. By 1991, capnography and pulse oximetry were firmly established standards.2 The precordial stethoscope failed to hold the interest of trainees, so by the final year of residency, it was all but forgotten. Today, few practicing anesthesiologists ever use a precordial stethoscope.

As a group, oral surgeons seem to appreciate the usefulness of the precordial stethoscope for respiratory monitoring of their sedated patients. It is perhaps unfortunate for anesthesiologists that the term “precordial” overshadows the terms “pre-tracheal” and “suprasternal notch” in describing continuous stethoscope monitoring. While the ECG and the pulse oximeter are instantaneous detectors of derangements in the circulatory system, acute changes in respiratory function, for example upper airway obstruction, laryngospasm and wheezing, can go undetected for short but critical periods of time when relying on capnography, pulse oximetry and the intermittent application of a standard stethoscope.

When all is going well in the middle of an anesthetic, nothing can seem more boring and restrictive than the continuous monitoring of breath sounds through an earpiece. Nevertheless, every anesthesia practitioner is aware of those critical moments of airway uncertainty at the beginning and end of every general anesthetic. Continuous monitoring of the upper airway sounds during these two times can either be very reassuring or trigger more appropriate and timely interventions. For instance, occasionally stridor will be noted immediately after placement of a laryngeal mask (LM) airway, despite the presence of carbon dioxide on the monitor. One might wonder whether the LM airway is causing a partial upper airway obstruction that might lead to some variation of negative pressure pulmonary edema and postoperative hypoxemia.3

In my current practice, I always have the capability to use a pre-tracheal stethoscope placed in the suprasternal notch. A pediatric bell can be used, but much more conveniently, I use a piezoelectric bell with a wireless Bluetooth earpiece. This device is also useful during transport and early recovery of the patient. However, it is always reassuring to have a reliable, albeit less sophisticated, backup device in place. 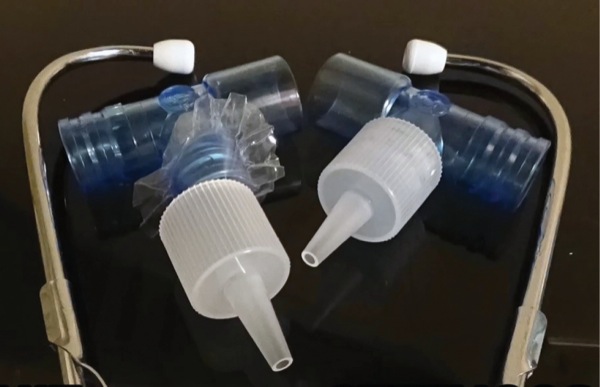 This special stethoscope can be easily fabricated by the least handy of practitioners and left attached more or less indefinitely to the exhalation connection of the anesthesia machine, similar to other devices such as a spirometer. The same anesthesia circuit can be used throughout the day as long as the bacterial/viral filter is changed between patients. With this stethoscope always at the ready, it is very conveniently deployed before induction of anesthesia and placement of an invasive airway; and then again, before emergence and removal of the airway.

Figure 2. View of connection for other end of the tubing.