A novel continuous popliteal-sciatic nerve block using a location immediately distal to the sciatic nerve bifurcation and deep to the paraneural sheath appears to offer no postoperative analgesic advantage over the traditional technique. Catheter insertion above the sciatic bifurcation and superficial to the paraneural sheath has been used more commonly.

According to Jacklynn F. Sztain, MD, an assistant clinical professor of anesthesiology at the University of California, San Diego School of Medicine, new research is challenging the traditional approach to these blocks. “Recent data suggest that in single-injection blocks, depositing the local anesthetic relative to the paraneural sheath can influence the block’s efficacy. Moreover, subparaneural injections have been found to have faster onset and higher success rates than their supraparaneural counterparts.”

Dr. Sztain and her colleagues hypothesized that postoperative analgesia with continuous popliteal-sciatic nerve block after foot or ankle surgery would be improved if the perineural catheter tip is inserted deep to the paraneural sheath and immediately distal to the bifurcation between the tibial and common peroneal branches. The traditional approach is insertion superficial to the paraneural sheath proximal to the bifurcation.

To test this hypothesis, the investigators enrolled 63 patients, each of whom was undergoing painful ambulatory foot or ankle surgery. All participants received an ultrasound-guided perineural catheter that was inserted either in the proximal or distal location in a randomized, subject-masked fashion. The infusion consisted of a single injection of 2% lidocaine through the catheter, followed by an infusion of 0.2% ropivacaine (6 mL per hour basal, 4-mL bolus, 30-minute lockout) for the duration of the study. 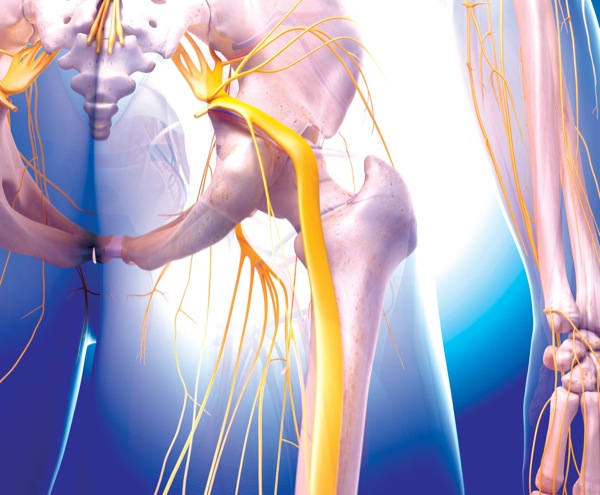 Patients were excluded from the trial if they had any type of neuropathy in the surgical limb, a history of chronic opioid use, renal insufficiency, a body mass index greater than 40 kg/m2 or local anesthetic allergies, or were pregnant.

The trial’s primary end point was average pain, measured on a numerical rating scale (NRS) of 0 to 10, in the two hours before a data-collecting telephone call at noon the day after surgery. Secondary end points included maximum pain score during those same two hours, opioid consumption in the PACU and following hospital discharge, fluid leakage at the catheter insertion site, and perceived numbness in the foot and toes.

The study also found no clinically meaningful or statistically significant differences between the treatment groups for any secondary end points (Table).

“So, our conclusion was that for subjects randomized to the two approaches who had a catheter inserted per protocol, there was no clinically relevant or statistically significant difference between the two groups with respect to any end point,” Dr. Sztain said.

“This trial found no evidence that continuous distal perineural sciatic nerve catheters provide any clinically relevant or statistically significant benefits compared to the traditional superficial proximal perineural catheter,” she added. “This is in contrast to what is found when you see single injections to the perineurium, distal to the bifurcation of the sciatic nerve.”

Session co-moderator Angela Selzer, MD, an assistant professor of anesthesiology at the University of Colorado School of Medicine, in Denver, questioned whether the study’s methodology considered the possibility of a negative finding. “When you have a negative study, oftentimes you think about whether you were adequately powered to find a significant difference. What type of difference were you looking for?”

“Our study was powered to find a difference in NRS pain scores of 2.5 between the two groups,” Dr. Sztain replied.

“I actually perform my single-shot blocks distally and my catheters proximally,” Dr. Selzer added. “So I’m happy that your findings support that part of my practice.”