Not Only Successful Intubations but Avoidance of Complications

Choosing an airway management technique based primarily on success rate is itself a form of outcome bias that may lead to inadequate planning or preparation.

Airway management in patients with oropharyngeal (OP) masses may be extremely challenging.1,2 Depending on its size and location, the lesion itself may be an obstacle and require that an endotracheal tube be maneuvered around the mass.3 In addition, OP masses may be friable and prone to bleeding, increasing the risk when using supraglottic airway devices and making bag-mask ventilation (BMV) more challenging. Patients with OP masses also are more likely to have abnormalities in neck or jaw mobility due to, for example, a history of chemotherapy or radiation to the head and neck.4 Finally, patients with airway masses are often older, which increases the difficulty of airway management due to anatomic and physiopathologic changes that occur normally as patients age, such as a floppy epiglottis or stiffer neck.5,6

When planning airway management for such a patient, the clinician must consider all of the above factors. Although the ultimate goal is a successful intubation, using success rate as the primary decision factor in choosing an intubation technique does not reflect the procedural difficulties and likelihood of adverse events that may occur with the chosen technique.7,8 An analogy related to soccer may clarify: A 1-0 win may not fully describe the near misses and other events that occurred during the game or in-game tactical management, and does not explain the amount of time spent attempting to score a goal versus defending one’s own net from a goal. Similarly, airway management (usually) ends with a “win” (i.e., successful intubation), but even if successful, process-related difficulties may occur, such as the need to alter patient positioning (add/remove pillows or change the height of bed), change to a different airway device, and/or make multiple attempts at directing and/or placing the endotracheal tube.

Difficulties during ventilation may include the need for continuous positive airway pressure (CPAP), two-person BMV, oxygen desaturation events, hypercarbia and hemodynamic instability. Because complications may increase with longer duration during airway management, the additional time required to change devices or use intubation aids may further increase the likelihood of an adverse event related to airway management.9

Historically, published literature primarily describes airway management techniques in terms of their success rate.8,10 However, as noted above, such an approach fails to fully describe the process and/or risks of airway management. Clinicians using their experience to choose an airway technique also should not fall victim to cognitive biases, which are particularly heightened when time is limited, as during a case of difficult airway management.11

Confirmation bias, or a tendency to seek only information that supports one’s beliefs, may occur during airway management when airway indexes that support a preferred management technique are overvalued in decision making.

Representativeness also may occur if a clinician targets a specific airway strategy based primarily on similarity to a previous episode. Choosing an airway management technique based primarily on success rate is itself a form of outcome bias that may lead to inadequate planning and/or preparation.

In light of the difficulty involved in airway management decision making in patients with OP masses, and assuming the favorable outcome of successful intubation in such patients, the following cases examine strategies to avoid potential procedural difficulties and/or complications during airway management.

A 57-year-old man weighing 73 kg with a history of smoking and a body mass index (BMI) of 22 kg/m2 presented with floor of mouth cancer for a right glossectomy and mandibulectomy. He was a Mallampati IV on physical examination with the other airway indexes (i.e., oral aperture, thyromental distance and neck range of motion) normal.

On the basis of this patient’s weight and airway examination, a decision was made to perform direct laryngoscopy with a Macintosh (Mac) 3 blade. After induction, a grade 4 view was obtained with the Mac 3 blade, and the decision was made to switch to a Miller 2 blade. The Miller 2 blade also was unsuccessful and led to a third attempt with a Miller 3 blade, which was successful. BMV required all five manual maneuvers, namely, CPAP greater than 20 cm H2O, two-person BMV, insertion of the oral airway, chin lift and jaw thrust. During intubation, the patient also became hypertensive, with a blood pressure of 144/111 mm Hg.

Although this patient was successfully intubated, unexpected difficulties occurred throughout the process of airway management, including multiple attempts to intubate by several personnel using various laryngoscope blades. As a result, BMV was required and proved challenging. Ultimately, these procedural difficulties led to unintended hemodynamic instability.

A 43-year-old man weighing 111 kg with a BMI of 37.1 kg/m2 with tongue cancer presented for a glossectomy and tracheotomy. His airway exam revealed a Mallampati III with a three-fingerbreadth oral aperture, two-fingerbreadth thyromental distance and limited neck range of motion.

The airway management plan was to perform asleep video laryngoscopy. After induction of anesthesia, multiple attempts were needed to visualize the vocal cords with the video laryngoscope. Several unsuccessful attempts were then made to place the endotracheal tube. An Ambu aScope was then used to successfully intubate the patient. During the intubation process, BMV with all five manual maneuvers was required, and the patient experienced multiple desaturation events with peripheral capillary oxygen saturation (SpO2) as low as 75%.

In this case, video laryngoscopy was unsuccessful and a device with more maneuverability was needed. The prolonged intubation time and need for a change in device resulted in a severe oxygen desaturation event. Whereas a quicker change to a supralaryngeal airway may have prevented the severe desaturation, such a switch may not be an option in a patient with a large OP mass.

A 66-year-old woman weighing 45 kg with a BMI of 16 kg/m2 presented with a large nasopharyngeal/OP tumor for biopsy, tracheotomy and esophagoscopy. She had a Mallampati III airway with a two-fingerbreadth thyromental distance and limited neck range of motion. The airway management plan was to intubate awake using a flexible fiber-optic bronchoscope. Midazolam 2 mg IV and ketamine 20 mg IV were administered for sedation. Intubation was uncomplicated and successful after one attempt; however, the patient desaturated with an SpO2of 84%.

In this case, the use of a fiber-optic technique allowed the maneuverability that led to the successful intubation. Although the intubation was uncomplicated, the patient suffered a moderate desaturation.

Taken together, these three cases demonstrate that although intubation can be successful in patients with OP masses, a review of the intubation process can produce insight into improvement. As the first two cases suggest, potentially avoidable adverse events occur even during successful intubations. Therefore, review of procedural decision making during intubation may have value. Ultimately, the goal is to choose the best possible plan for initial airway management, and then appropriately recognize when that plan may need modification due to events that occur during the process of intubation. 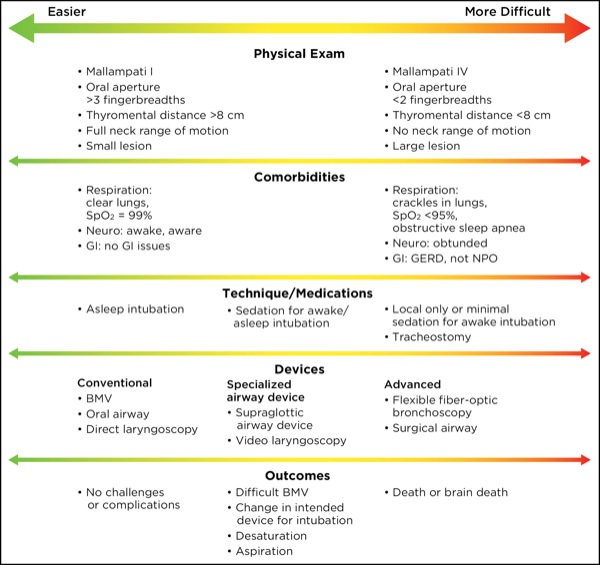 There is a spectrum of patient factors, such as the physical exam (airway indexes) and comorbidities, which may contribute to decision-making. The process of airway management involves the medications, technique and devices used in order to obtain successful outcomes by avoiding challenges and preventing complications.
BMV, bag-mask ventilation; GI, gastrointestinal; GERD, gastroesophageal reflux disease; NPO, nothing by mouth; SpO2,peripheral capillary oxygen saturation

The first step in reviewing an airway management episode is to reexamine preprocedural airway management planning (Figure). In addition to the standard airway examination, patient factors such as obstructive sleep apnea (OSA), chronic obstructive pulmonary disease (COPD) or a history of radiation, as well as characteristics of the lesion itself, may all play a role. A set of likely complications and difficulties may then be constructed. For example, a history of OSA may alert the clinician that sedation can trigger airway obstruction, dramatically increasing the difficulty of even an awake intubation. Similarly, the altered response to hypercapnia characteristic of COPD may limit the amount of narcotic that can be given during an awake fiber-optic bronchoscopy attempt (Table).

When managing the airway of a patient with an OP mass, four main variables should be considered:

Ideally, difficult airway management should not only be successful but also avoid adverse events such as oxygenation desaturation, airway bleeding, aspiration and hemodynamic instability.7,12

To reduce confirmation and fixation bias, a rule of 3’s may be followed when managing the airways of patients with OP masses. Limit:

Because difficult airway management is almost always successful, focusing on procedural difficulties may allow clinicians to improve their decision-making behavior over time, and thus minimize complications in patients with OP masses.