Oral airways, which are used around the world an estimated 350 million times annually and often in challenging situations, are a ubiquitous part of anesthesia practice. Yet as a retired professor from the Emory University School of Medicine explained, current airways have drawbacks as they are not designed to hold the jaw protruded or control the tongue from falling back.

A new airway, the Lower-Jaw-Thrusting (LJT) oral airway (Wedge Therapeutics), is designed to address these problems. As its developer explained, the novel airway prevents both the jaw and tongue from moving backward in unconscious or semiconscious patients, thereby providing what he claimed is superior airway management in these individuals (Figure).

“Every anesthesiologist uses the oral airway,” said T.R. Shantha, MD, PhD, a retired professor of anesthesiology from the Atlanta institution and professor emeritus from Basaveshwara Medical College in Chitradurga, India. “But all of them allow the jaw and tongue to fall backward and create an obstruction if you don’t manually hold the jaw protruded forward.

“I’ve been wrestling with this for a long time and have developed an oral airway that will hold the jaw and tongue forward, thereby opening the entire airway from front to back—all while freeing the hands of the practitioner,” Dr. Shantha said.

No Trauma to Oral Mucosa

As Dr. Shantha described, oropharyngeal airways largely owe their designs to Arthur Guedel’s 1933 original design and Robert Berman’s 1952 revised design. Nevertheless, the relative inability of these devices to keep the lower jaw protruded is problematic; as soon as practitioners remove their jaw-thrusting hand, the jaw and tongue fall backward.

Indeed, for patients under anesthesia or emerging from anesthesia, the muscles of the tongue, mandible and soft tissue structures in the hypopharynx are inclined to collapse, either from front to back or side to side, thereby greatly decreasing the size of the oropharyngeal airway or blocking it entirely.

“Even more concerning,” Dr. Shantha said, “is that these current oral airways don’t employ proportional dimensional standards in relation to the buccal bite block and C-curve length—another factor that causes them to be deficient in maintaining the oropharyngeal airway.”

Considering previous research demonstrating that mandibular advancement increases the oropharynx opening under anesthesia, Dr. Shantha and his colleagues developed the LJT oral airway, which mechanically pulls the lower jaw forward and holds it in a protruded position while simultaneously preventing the flaccid tongue from moving backward. The device incorporates a mandibular flange that extends down from the bite block, which is designed to hold the mandibular incisor teeth in a protruded position. 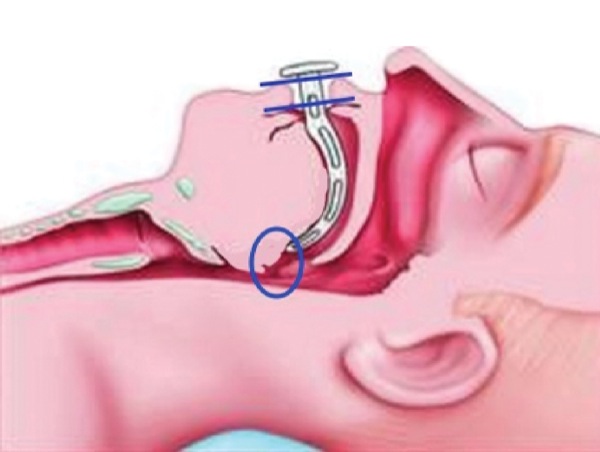 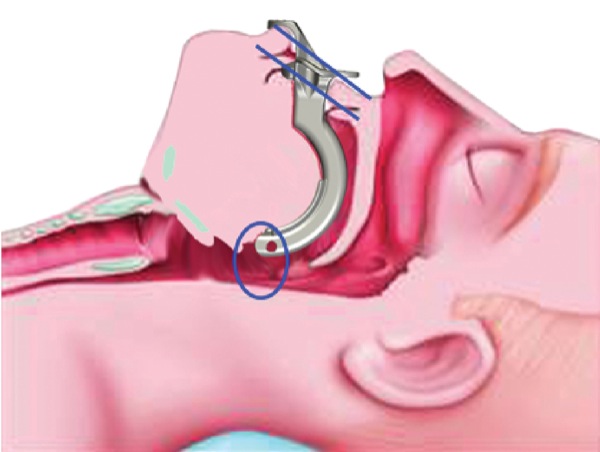 Figure. Comparison of the Berman oral airway (top) and LJT oral airway (bottom). Note the alignment angle of the maxillary and mandibular teeth and jaw. The LJT airway protracts the lower mandibular jaw and pulls the tongue and genioglossus muscle forward, preventing the tongue from moving back toward the epiglottis and oropharynx, thus holding it away from the posterior pharyngeal wall.

Useful in Pediatric and Overweight Patients

The researchers tested the efficacy of the design in 24 healthy volunteers undergoing regional anesthesia. They reported that the airway not only allowed for increased ventilation and airway opening but also was successful in controlling various oral structures. Each patient was able to maintain a protruded jaw for one hour with no apparent adverse effects. Examination of patients’ oral cavities revealed no mechanical trauma to the mucosa.

“We designed the LJT oral airway so that it would hold the jaw forward and increase the airway space by 50%,” Dr. Shantha explained. The new airway also addresses airway challenges in children and overweight patients, said Dr. Shantha, two patient populations that often have anatomic anomalies that make it difficult to extend the neck and thrust the lower jaw forward. These characteristics, he said, may limit the opening of the oropharyngeal area.

The device also offers advantages in patients who require bag-mask ventilation, according to the researchers. With traditional oral airways, this type of manual ventilation has a propensity to allow air to enter the stomach because blockage of the oropharyngeal airway permits air to enter the esophagus. This may necessitate suctioning of stomach contents, increasing procedure time and associated costs.

Bag-mask ventilation also tends to require extra force because the soft tissue of the flaccid tongue falls back and the fauces collapse along with the jaw. This phenomenon is minimized or eliminated with the LJT oral airway, said Dr. Shantha, which allows the oropharynx to remain unobstructed.

Dr. Shantha originally presented his device at the 2018 annual meeting of the American Society of Anesthesiologists (abstract A3019).